Earthwork involves movement of a portion of the earth’s surface from one location to another and, in its new position, creation of a desired shape and physical condition. Occasionally, the material moved is disposed of as spoil.

According to Type of Material Excavated 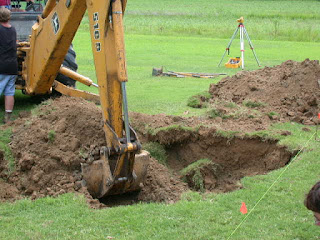 A common method of classifying excavation is by type of excavated material: topsoil, earth, rock, muck, and unclassified.

Topsoil excavation is removal of the exposed layer of the earth’s surface, including vegetation. Since the topsoil, or mantle soil, supports growth of trees and other vegetation, this layer contains more moisture than that underneath. So that the lower layer will lose moisture and become easier to handle, it is advantageous to remove the topsoil as soon as possible. When removed, topsoil usually is stockpiled. Later, it is restored on the site for landscaping or to support growth of vegetation to control erosion.

Earth excavation is removal of the layer of soil immediately under the topsoil and on top of rock. Used to construct embankments and foundations, earth usually is easy to move with scrapers or other types of earthmoving equipment. Rock excavation is removal of a formation that cannot be excavated without drilling and blasting. Any boulder larger than 1⁄2 yd3 generally is classified as rock. In contrast, earth is a formation that when plowed and ripped breaks down into small enough pieces to be easily moved, loaded in hauling units, and readily incorporated into an embankment or foundation in relatively thin layers. Rock, when deposited in an embankment, is placed in thick layers, usually exceeding 18 in.

Muck excavation is removal of material that contains an excessive amount of water and undesirable soil. Its consistency is determined by the percentage of water contained. Because of lack of stability under load, muck seldom can be used in an embankment. Removal of water can be accomplished by spreading muck over a large area and letting it dry, by changing soil characteristics, or by stabilizing muck with some other material, thereby reducing the water content.

Unclassified excavation is removal of any combination of topsoil, earth, rock, and muck. Contracting agencies frequently use this classification. It means that earthmoving must be done without regard to the materials encountered. Much excavation is performed on an unclassified basis because of the difficulty of distinguishing, legally or practically, between earth, muck, and rock. Unclassified excavation must be carried out to the lines and grades shown on the plans without regard to percentage of moisture and type of material found between the surface and final depth.

According to Purpose of Work

Excavation also may be classified in accordance with the purpose of the work, such as stripping, roadway, drainage, bridge, channel, footing, borrow. In this case, contracting agencies indicate the nature of the excavation for which materials are to be removed. Excavation designations differ with agencies and locality. Often, the only reason a certain type of excavation has a particular designation is local custom.

Stripping usually includes removal of all material between the original surface and the top any material that is acceptable for permanent embankment.

Roadway excavation is that portion of a highway cut that begins where stripping was completed and terminates at the line of finished subgrade or bottom of base course. Often, however, stripping is made part of roadway excavation.

Drainage excavation or structure excavation is removal of material encountered during installation of drainage structures other than bridges. Those structures are sometimes referred to as minor drainage structures and include roadway pipe and culverts. A culvert is usually defined as any structure under a roadway with a clear span less than 20 ft, whereas a bridge is a structure spanning more than 20 ft. After a pipe or culvert has been installed, backfilling must be done with acceptable material. This material usually is obtained from some source other than drainage excavation, which generally is not acceptable or workable. Often, culvert excavation does not include material beyond a specified distance from the end of a culvert.

Bridge excavation is removal of material encountered in digging for footing and abutments. Often, bridge excavation is subdivided into wet, dry, and rock excavation. The dividing line between wet and dry excavation usually is denoted by specification of a ground elevation, above which material is classified as dry and below which as wet. A different elevation may be specified for each foundation.

Channel excavation is relocation of a creek or stream, usually because it flows through a right-ofway. A contracting agency will pay for any inlet or outlet ditch needed to route water through a pipe as channel excavation, to the line where culvert excavation starts.

Footing excavation is the digging of a column or wall foundation for a building. Thiswork usually is done to as neat a line and grade as possible, so that concrete may be cast without forms. Although elimination of forms saves money, special equipment and more-than-normal handwork are usually required for this type of excavation.

Dredge excavation is the removal of material from under water.