Checklist for Shrinkage and Temperature Reinforcement

To satisfy the shrinkage and temperature reinforcement requirements of ACI 318-02: 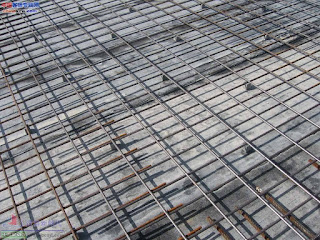 Can Fibers be Used?

The code requirements for prestressing tendons used for shrinkage and temperature reinforcement might provide a starting place. Section 7.12.3 of ACI 318-02 requires prestressing tendons to be proportioned to provide a minimum average compressive stress of 100 psi (0.7 MPa) on gross concrete area. Section R7.12.3 of the commentary states that these prestressed reinforcement requirements have been selected to provide an effective force on the slab approximately equal to the yield-strength for nonprestressed shrinkage and temperature reinforcement. For a 6-in.-thick (152 mm) structural slab with Grade 60 shrinkage and temperature reinforcing steel, the required area of reinforcing steel for a 1-ft-wide (305 mm) section would be 0.0018 x 6 in. x 12 in. or 0.13 in2/ft. (0.275 mm2/mm). The equivalent yield-strength force of the Grade 60 steel would be 0.13 in2 x 60,000 psi or 7800 lb/ft (114 N/mm). The prestressing reinforcement requirement would provide an effective force of 100 psi x 6 in. x 12 in. or 7200 lb/ft (105 N/mm). Using a similar rationale, if fibers provided an effective tensile force of about 7000 lb/ft (102 N/mm) on a 6-in.-thick (152 mm) slab, they could be considered to satisfy the ACI 318-02 shrinkage and temperature reinforcement requirements. Designers wishing to substitute fibers for deformed bars or welded-wire fabric could possibly show calculations or test results to demonstrate that this effective force is achievable with the proposed fiber type and dosage. Steel-fiber dosage rates for normal weight concrete typically vary from 50 to 200 lb/yd3 (30 to 120 kg/m3).(1)
At dosage rates more than 50 to 60 lb/yd3 (30 to 35 kg/m3), however, concrete becomes difficult to place by pumping. Thus, it’s likely that the needed effective force would have to be achieved at a steel-fiber dosage rate in that lower range. If steel fibers were approved for use instead of steel bars or welded-wire fabric, design professionals might still prefer to use bars for crack-width control at
reentrant corners in slab openings or at locations where slab thickness has changed.

7.12.1.2 — Where shrinkage and temperature movements are significantly restrained, the requirements of 8.2.4 and 9.2.3 shall be considered.

7.12.2— Deformed reinforcement conforming to 3.5.3 used for shrinkage and temperature reinforcement shall be provided in accordance with the following:

7.12.2.3 — At all sections where required, reinforcement for shrinkage and temperature reinforcement shall develop the specified yield strength fy in tension in accordance with Chapter 12.

When flexural members are restrained at the supports, drying shrinkage or thermal contraction causes a buildup of tensile forces that are additive to any bending forces caused by external loads. Controlling the width of cracks caused by restrained drying shrinkage or thermal contraction isn’t usually a problem in two-way slabs because the flexural reinforcement prevents cracks from opening too wide. But in one-way slabs, crack width is controlled only by the shrinkage and temperature reinforcement perpendicular to flexural reinforcement. If the area of the temperature reinforcement isn’t adequate, cracks can extend completely through the slab and may become wide enough to cause serviceability problems. Because of this problem, ACI 318-02 requires that the effects of forces due to shrinkage and temperature changes be taken into account where structural walls or large columns provide significant restraint to structural slab movements. Section 7.12.1.2, for instance, tells the designer to consider the requirements of Sections 8.2.4 and 9.2.3.

Section 8.2.4 requires the designer to consider effects of forces due to shrinkage, temperature changes, and other factors such as creep. The commentary for this section states that information is accumulating on the magnitudes of these varying effects, but cites only one reference, which doesn’t deal with shrinkage and temperature reinforcement for structural slabs. Section 9.2.3 states that “Estimations of differential settlement, creep, shrinkage, expansion of shrinkage compensating concrete or temperature change shall be based on a realistic assessment of such effects occurring in service.” The commentary for this section advises the designer to consider the effects of these variables, and explains that the term, “realistic assessment,” is used to indicate that the most probable values, rather than the upper bound values of the variables, should be used. It offers no
guidance for determining the most probable values. Analyzing the effects of shrinkage or temperature change isn’t a simple task. The analysis requires assumptions about:

A shrinkage and temperature analysis using an elastic model will typically result in large, calculated internal forces that are probably closer to upper-bound values than to most probable values. An inelastic analysis, using an age-adjusted modulus of elasticity, will help account for the time-dependent behavior of the structure and result in lower internal forces.

The commentary for Section 7.12.1.2 also suggests using control strips during construction to reduce cracks caused by restraint. A shrinkage control strip, often called a closure strip or pour strip, is a temporary separation used during construction to permit initial shortening to occur in two or more separate slab regions. In post-tensioned slabs, the shortening can be a combination of drying shrinkage, thermal contraction, and creep and elastic deformation resulting from the post-tensioning. The control strip is left open to allow each slab region to shorten, and is then closed by filling it with concrete. Closure strips are sometimes an alternative to expansion joints when a building length exceeds 250 ft (76 m).3 They’re used extensively in unbonded post tensioned structures to minimize the movement and restraint developed during post-tensioning and due to early volume changes. Some closure-strip details are as follows:
Closure strips left open for long time periods can be expensive. On some of our projects, we were required to keep the strips open for 90 days. When building a multistory structure at a rate of a floor a week, concrete contractors can be 12 floors above the first open closure strip. Designers often require the bay enclosing the closure strip to be formed and shored during the waiting period. This ties up forms and shores for a longer time and results in more expensive construction. More importantly, other trades usually can’t start and complete their work until the concrete floor is completed. Delaying the other trades can extend the schedule required to complete the building. Because delaying filling the closure strip can be expensive, designers need to carefully determine the time requirement. From experience, a 0.25-in. (6 mm) displacement at each end of the closure strip (0.50-in. [12 mm] total displacement) can be accommodated in a post-tensioned structure without significant impairment to its serviceability.(3)
Consider the following example:
A closure strip divides a 200-ft (61 m) slab into two 100-ft (30.5 m) sections. The slabs shorten from each end, resulting in a net shortening distance of 50 ft (15 m). The ultimate reinforced-concrete shortening is estimated to be 0.06%. The total long-term displacement between the two edges of the strip would be 50 ft × 12 × 0.0006 = 0.36 in. × 2 (for each slab) or 0.72 in. (18 mm). Thus, when the ultimate shortening is reached, the closure-strip edges should be 0.72 in. (18 mm) farther apart. If 40% of the shortening takes place in 4 weeks, the closure strip displacement is 0.29 in. (7 mm). The remaining long-term displacement would be 0.72 – 0.29 = 0.43 in. (11 mm). Based on the 0.25-in. (6 mm) industry experience, the closure strip can be filled because 0.43 in. is less than the allowable 0.50-in. (12 mm) total displacement.

For post-tensioned and nonpost-tensioned structures with closure-strip open-times greater than 30 days, our company works with the designer to agree on an acceptable displacement that must occur before the strip is filled. A testing-lab technician then periodically uses a mechanical gage to measure the distance between gage plugs glued to the slab surface on each side of the closure-strip opening. When the measured displacement is reached—0.43 in. (11 mm) in our example—the closure-strip is filled. Typically, the time required to reach the 0.50-in. (13 mm) remaining displacement is 30 to 60 days for slabs restrained by columns near the ground or by stiff sections such as stairwells or shear walls at higher levels. Occasionally, the required displacement can be reached earlier because some designers specify a maximum permissible shrinkage for the concrete, and this minimizes the time required to get to the 0.50-in. (12 mm) target displacement. Don’t expect the time to reach the 0.50-in. displacement requirement to be the same for all the floors in a multistory structure. The first few floors above a rigid plaza level are usually critical due to the stiff restraint provided at that level. As the building rises higher, however, the floor movement is restrained less and the floor below is shortening while the floor above is placed. This reduces the amount of waiting time needed to reach the 0.50-in. (12 mm) displacement criteria. The roof slab closure strip can typically be closed in about half the time needed for the floors below. When measuring the distance across a closure strip, the technician must also record the temperature of the structure because displacements caused by temperature changes have to be accounted for. For example, when the temperature increases, the distance across the closure strip may decrease rather than increase because of thermal expansion. To correct for displacement caused by thermal movements, subtract the temperature when the slabs were poured from the temperature recorded during measurement of the distance across the closure strip. Multiply the temperature difference by the coefficient of thermal expansion for the concrete and by the half-length of each building section to estimate the thermal movement. Correct the measured distance across the closure strip by the temperature-change distance to find out how much shortening is occurring, and at what rate. What if the timing is wrong? Waiting to fill the closure strip can be costly because it affects other trades and delays building completion. But filling the closure strip too early can create cracks. If the floor is carpeted and the ceiling isn’t exposed, a few more cracks probably aren’t detrimental. However, if the ceiling is painted or sprayed, or the floor requires crack repair before covering, this may be an added expense. The owner might prefer to accept a few cracks and pay for crack repair instead of delaying building completion by more than a month.