Trickle irrigation, sometimes referred to as drip irrigation, is a low-pressure irrigation method that uses such systems that place water slowly and directly in the root zone of the desired plant, increasing the efficiency of the water applied.

Trickle irrigation can reduce water usage by 30 to 70 percent compared to more traditional means of irrigation, such as overhead sprinklers or hand watering .
History
Methodology

Drip, or micro-irrigation, technology uses a network of plastic pipes to carry a low flow of water under low pressure to plants. Water is applied much more slowly than with sprinkler irrigation system. Drip irrigation exceeds 90 percent efficiency whereas sprinkler systems are 50 to 70 percent efficient. If systems are set to water excessively, any system including drip can waste water. Low volume application of water to plant roots maintains a desirable balance of air and water in the soil. Plants grow better with this favorable air-water balance and even soil moisture. Sprinkler irrigation results in a greater wet-to-dry fluctuation in the soil and may not produce optimal growth results. Slopes are inefficient to irrigate because gravity pulls water downhill, causing runoff and water waste. The slow rate of water applied through drip irrigation is more likely to soak in before it runs off .
Components of a Drip Irrigation System 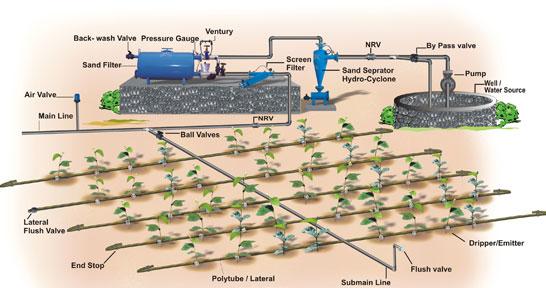 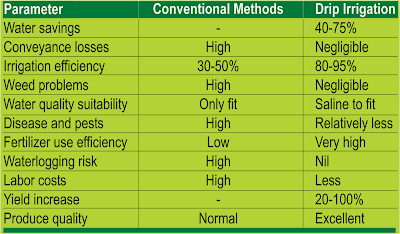