The subject and purposes of the Theory of Structures in the broad sense is the branch of applied engineering that deals with the methods of analysis of structures of different types and purpose subjected to arbitrary types of external exposures. Analysis of a structure implies its investigation from the viewpoint of its strength, stiffness, stability, and vibration. 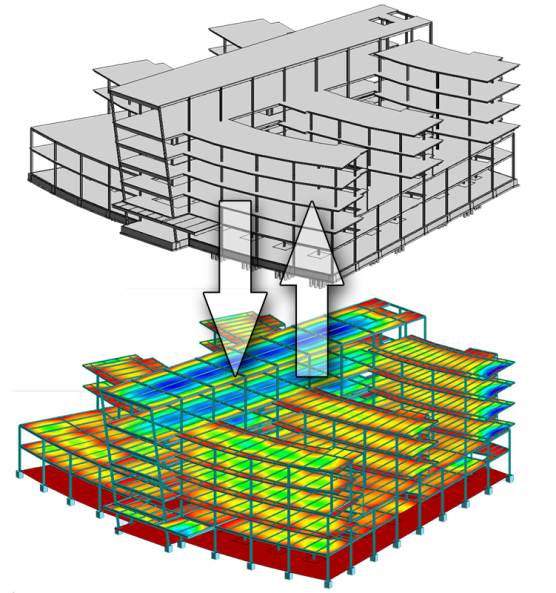 Analysis of any structure may be performed based on some assumptions. These assumptions reflect the purpose and features of the structure, type of loads and operating conditions, properties of materials, etc. In whole, structural analysis may be divided into three large principal groups. They are static analysis, stability, and vibration analysis.
Static analysis presumes that the loads act without any dynamical effects. Moving loads imply that only the position of the load is variable. Static analysis combines the analysis of a structure from a viewpoint of its strength and stiffness.
(i) Static Linear Analysis (SLA)
The purpose of this analysis is to determine the internal forces and displacements due to time-independent loading conditions. This analysis is based on following conditions:
1. Material of a structure obeys Hook’s law.
2. Displacements of a structure are small.
3. All constraints are two-sided – it means that if constraint prevents displacement in some direction then this constraint prevents displacement in the opposite direction as well.
4. Parameters of a structure do not change under loading.
(ii) Nonlinear Static Analysis
The purpose of this analysis is to determine the displacements and internal forces due to time-independent loading conditions, as if a structure is nonlinear. There are different types of nonlinearities. They are physical (material of a structure does not obey Hook’s law), geometrical (displacements of a structure are large), structural (structure with gap or constraints are one-sided, etc.), and mixed nonlinearity. Stability analysis deals with structures which are subjected to compressed time independent forces.

(iii) Buckling Analysis
The purpose of this analysis is to determine the critical load (or critical loads factor) and corresponding buckling mode shapes.
(iv) P-delta Analysis
For tall and flexible structures, the transversal displacements may become significant. Therefore we should take into account the additional bending moments due by axial compressed loads P on the displacements caused by the lateral loads. In this case, we say that a structural analysis is performed on the basis of the deformed design diagram.
Dynamical analysis means that the structures are subjected to time-dependent loads, the shock and seismic loads, as well as moving loads with taking into account the dynamical effects.
(v) Free-Vibration Analysis (FVA)
The purpose of this analysis is to determine the natural frequencies (eigenvalues) and corresponding mode shapes (eigenfunctions) of vibration. This information is necessary for dynamical analysis of any structure subjected to arbitrary dynamic load, especially for seismic analysis. FVA may be considered for linear and nonlinear structures.