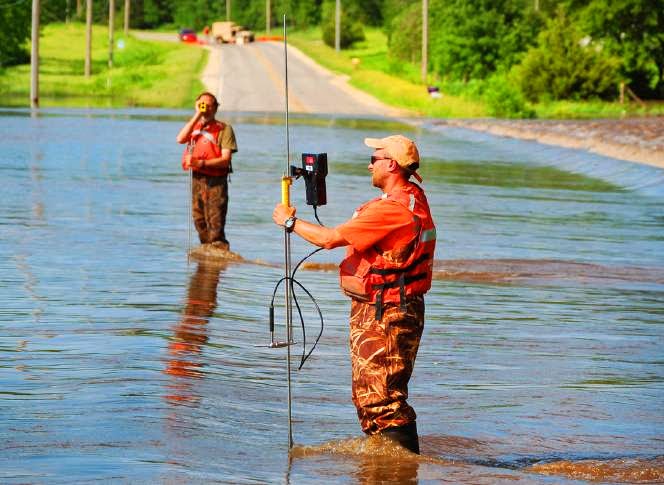 Hydrological measurements are used to obtain data on hydrological processes. Academic research and practical engineering projects all depend on the hydrological data to calibrate and validate the relevant models.

A time series is a sequence of data points, measured typically at successive times, spaced at (often uniform) time intervals. For example, the rainfall measured by a rain gauge at a specific location is a time series.

A frequency domain graph shows how much of the time series lies within each given frequency band over a range of frequencies. The frequency tools include spectral analysis and wavelet analysis.

Spatial data have some form of spatial or geographical reference that enables them to be located in two or three dimensional space (such as remote sensed images). Spatial data are often accessed, manipulated or analyzed through Geographic Information Systems (GIS).

It is a collection of time series with spatial or geographical references. For example, the data from a network of rain gauges are a typical spatial time series.

It is an effect that causes different signals to become indistinguishable (or aliases of one another) when sampled. In such a case, distortions will occur when the signal reconstructed from samples is different from the original continuous signal.

A perfect reconstruction of a signal is possible when the sampling frequency is greater than twice the maximum frequency of the signal being sampled. For example, if a signal has an upper band limit of 100 Hz, a sampling frequency greater than 200 Hz will avoid aliasing and allow theoretically perfect reconstruction. If a lower sampling rate has to be used, an anti-aliasing filter should be used to prevent aliasing.

Rainfall is recorded by two types of gauges: a nonrecording gauge is simply a container to store rain water. They are read manually at long time intervals (daily, weekly, etc.). In contrast, recording gauges automatically record the depth of rainfall with a high temporal resolution (available 15 minutes or hourly). A recording gauge has various ways of measuring rainfall intensity (tipping bucket, float, weighing, optical, etc.). The tipping bucket gauge is the most widely used rain gauge by the water industry due to its low cost and high reliability.

A rain gauge is more accurate than other rainfall measurement devices (e.g., weather radar and satellite), but it can only measure rainfall at a specific location, and its quality can be affected by wind, fallen tree leaves, etc.
2.2 Snow pillow

A snow pillow measures the water equivalent of the snow pack based on snow pressure on a plastic pillow.

An evaporation pan is used to hold water during observations for the determination of evaporation at a given location.

A lysimeter is used to measure evapotranspiration and made with a tank of soil in which vegetation is planted to emulate the surrounding ground cover. The amount of evapotranspiration is measured by water weight balance from the water input and output of the tank.

a) A tensiometer provides a direct measure of the tension at which water is held in soil. This instrument comprises a water filled tube which is sealed at one end, with a porous ceramic filter at the other end. When buried in soil, it allows water to flow freely through it, but not air. The suction of the water within the tube provides a direct measure of the suction pressure in the surrounding soil. With the suction pressure and soil moisture content curve, soil moisture can then be derived.

c) A neutron moisture meter consists of two main components, a probe and a gauge. The probe is inserted in a hole in the ground and it emits fast neutrons. The emitted neutrons are slowed down and reflected by the water molecules in the surrounding soil. The gauge monitors the flux of the slow neutrons scattered by the soil. The degree of reflection is proportional to the soil moisture content. The operator of a neutron probe needs nuclear safety training.

Infiltrometer is a device used to measure the rate of water infiltration into soil or other porous media. Commonly used infiltrometers are of single ring or double rings. It is easy to use, but the soil structure is usually disturbed.

A sunshine recorder is originally made with a glass sphere filled with water and later on with a solid glass sphere. When the sphere burns, it records a trace on the recorder cards attached to it, the length of which shows the duration of bright sunshine.

Anemometer is a weather instrument that measures wind speed. The most widely used anemometer consists of three or four cups that spin according to the speed of the wind. Modern ultrasonic anemometers are able to measure wind speed in three dimensions.

Thermometers placed in a Stevenson screen are used to measure the ordinary, maximum/minimum air temperatures.

A barometer is an instrument used to measure atmospheric pressure. There are various types based on air, water or mercury. Italian physicist Torricelli invented the first mercury barometer with a tube of 1m long filled with mercury. A more widely used barometer is called aneroid barometer which is made of a small, flexible alloy metal cell. Small changes in external air pressure cause the cell to expand or contract so that the attached mechanical levers can amplify the tiny movements of the capsule for visual display.

In contrast to a rain gauge that is a ground based measurement, weather radar measures rainfall well above the ground (Figure 4). Weather radars send directional pulses of microwave radiation. Between each pulse, the radar serves as a receiver and listens for return signals from rainfall drops in the air. Return echoes, called reflectivity, are analyzed for their intensities in order to establish the precipitation rate in the scanned volume. Weather radars can cover large areas and are able to observe precipitation over the sea. Several radars can be combined to provide a composite rainfall image (Figure 5). There are several error sources in weather radar measurements. Radar pulses spread out as they move away from the radar station, decreasing resolution at far distances. Radar beams may also suffer from attenuation, shielding, anomalous propagation, brightband, etc.