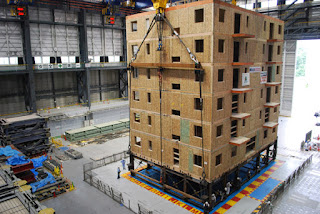 The branch of engineering concerned with reducing earthquake or seismic risk to structures. Because strong earthquakes are rare events, building codes have traditionally allowed a significant degree of damage. Even high-seismic regions, such as San Francisco or Tokyo, typically experience a strong earthquake only once in many decades. If an earthquake occurs, buildings and other structures are designed such that most will be damaged (but should not collapse), and will have costs for repairs, business interruption, and potentially casualties. While building collapse is the primary cause of loss of life in most earthquakes, other contributors to earthquake loss include equipment and contents damage, business interruption, and damage to lifelines, such as water, power, gas, communications, and transportation. To limit these losses to acceptable levels, earthquake engineering involves a process of (1) seismic hazard identification, (2) structural analysis, design, and/or retrofitting to prevent structural collapse and reduce property damage, and (3) review of equipment and operations to prevent disruption due to earthquakes—that is, an integrated, comprehensive program of facility seismic review, analysis, retrofit, emergency planning, and risk transfer, involving the expertise of mechanical engineers, operations specialists, emergency planners, and insurers, in addition to geoscientists and structural engineers.

Most earthquakes are caused by the fracture and sliding of portions of the Earth's crust along faults, which may be hundreds of miles long, from 1 mi (1.6 km) to over 100 mi (160 km) deep, and sometimes not readily apparent on the ground surface. Earthquakes can occur anywhere on Earth, but most occur along major tectonic plate boundaries (“Ring of Fire”), especially on the circum-Pacific plate boundary, the Caribbean, and the Trans-Alpide belt (stretching from southern France through the Mediterranean and the Middle East, along the Himalayan foothills and the Indonesian archipelago). In the United States, 39 of the 50 states are considered at moderate to high seismic risk, with major earthquake potential in the western states, Alaska, the central United States (St. Louis–Memphis region), and portions of the east coast (South Carolina, Massachusetts). See also: Earthquake; Seismic risk.Earthquakes can cause significant damage to the built environment due to fault rupture, vibratory ground motion (shaking), inundation (tsunami, seiche, dam failure), various kinds of permanent ground failure (liquefaction, landslide), and fire or hazardous materials release. In a particular event, any of these hazards can dominate, and historically each has caused major damage and great loss of life. The expected damage given a specified value of a hazard parameter is called vulnerability, and the product of the hazard and the vulnerability is the expected loss or seismic risk.
For most earthquakes, shaking is the dominant and most widespread cause of damage. Shaking near the actual earthquake rupture lasts only during the time when the fault ruptures, a process which takes seconds or at most a few minutes. The seismic waves generated by the rupture propagate long after the movement on the fault has stopped, spanning the globe in about 20 min. Typically earthquake ground motions are powerful enough to cause damage only in the near field (that is, within a few tens of kilometers from the causative fault). In a few instances, long period motions have caused significant damage at great distances to selected structures. A prime example was the 1985 Mexico City earthquake, where a magnitude 8.1 earthquake occurring at a distance of approximately 400 km from Mexico City caused numerous collapses of mid- and high-rise buildings.
Intensity scales in use include the Modified Mercalli Intensity (MMI) in the United States, Medvedev-Sponheur-Karnik (MSK-81) in Europe, and the Japan Meteorological Agency (JMA) scale. Roman numerals are traditionally used for intensity scales to indicate the qualitative nature of the scales, which are based on subjective observations rather than instrumental records. For the MMI and MSK scales, 0 is no earthquake, VI is the initiation of damage to poor-to-average structures, and XII is total destruction. Earthquake shaking at a site is recorded on a seismometer, which digitally or optically records a time history of ground accelerations at the site. Statistical analysis of hundreds of such accelerograms provide attenuation regressions, which permit estimation of the maximum acceleration, velocity, or displacement that a structure will experience at a site as a function of the structure's natural period, the site-specific soil properties, and the magnitude, distance, and depth of the hypothesized earthquake. In the United States, ground motions due to all potential earthquakes have been synthesized by the U.S. Geological Service, so that any site's seismic hazard (based on an average soil type) can be quickly determined. Based on this hazard, or on building code requirements mapped at a regional scale, the seismic lateral force requirements against which a structure must be designed are determined.

In the developed world, existing buildings and infrastructure constitute by far the preponderance of earthquake risk, so that a major focus of earthquake engineering is on identification, analysis, and mitigation (reduction) of this risk. New construction is generally safer, but is still a focus for earthquake engineers, especially larger or unusual structures. In the developing world, even recent and new construction is a significant contributor to seismic risk, due to lack of building code enforcement.The most seismically hazardous existing building structures are low-strength masonry (such as adobe in developing countries), unreinforced brick masonry (such as exists in older portions of United States cities), nonductile reinforced concrete (typically, concrete frames constructed prior to the 1980s), and certain kinds of precast concrete buildings. Steel and wood structures are not immune to earthquake damage, but typically are less collapseprone.
However, the tallest high-rise building to collapse, for any reason, was the 23-story Piño Suarez steelframed building in the 1985 Mexico City earthquake. Building vulnerability is typically mitigated via structural retrofits involving strengthening wall-diaphragm connections, adding shear walls or bracing, and improving ductility of columns by steel jacketing or other methods. A diaphragm is a horizontal force-distributing element, such as a roof or floor. Relatively new reinforced concrete buildings that collapsed in the Marmara, Turkey, earthquake, August 17, 1999.
Earthquake analysis and design of a structure is commonly performed assuming the structure remains elastic (that is, the design neglects the effects of damage), though inelastic analyses (which takes into account material inelasticity) are increasingly used. For ordinary design, the actual earthquake forces are reduced by a response modification factor that varies depending on the assumed inherent ductility of the structure, based on its lateral force-resisting system (moment frame, braced, shear wall) and material (wood, steel, concrete). This force reduction, along with appropriate safety factors, is combined with gravity and other loads in the design of the overall structure. Pseudo-static or linear dynamic analytical methods are used to determine structural member forces. Pseudo-static methods are based on the structure's natural period (first mode of vibration) and are appropriate only for simple structures. Linear dynamic methods account for the first and higher modes, which analyses are usually more quickly performed in the frequency domain, using techniques based on the fast Fourier transform. For larger and more important structures, nonlinear dynamic analyses are used, typically in the time domain. In a nonlinear dynamic analysis, the structure is subjected to earthquake acceleration time histories (actual or synthesized records, scaled to match the site hazard), and member response into the inelastic range is taken into account, including P-Δ effects (that is, the increase in overturning moment due to the structure's weight P times its lateral deflection Δ). Dynamic analysis has become common due to the advent of more powerful computers and specialized software—ETABS, SAP2000, ANSYS, STAAD, and LARSA are some of the structural analysis packages commonly used today.
New design approaches
Traditionally, engineers have designed structures to resist earthquake forces, intending the strength of structural members to be equal to or greater than the seismic demand placed on them.During the 1980s and 1990s, new approaches to seismic design emerged, which involved modifying the structural response to reduce earthquake loads to more tolerable levels. These included base isolation, supplemental damping, and active control. Base isolation involves placing special components, termed isolators (not always at the base, so that the technique is more properly termed structural isolation), within the structure that are relatively flexible in the lateral direction, yet can sustain the vertical load. When the earthquake causes ground motions beneath the structure, the isolators allow the structure to respond more slowly than it would without them, resulting in lower seismic demand on the structure. Isolators may be laminated steel with high-quality rubber pads, sometimes incorporating lead or other energy-absorbing materials, or parabolic dish-shaped base plates, which rely on the structure's own weight trying to “climb” the sloping sides of the “dish” to counteract the lateral force of the earthquake. Supplemental damping involves placing dampers within the structure, which retard the structural response of the normal or lightly damped structure, again resulting in lower seismic demand on the structure. Active control involves placing hydraulic rams or other actuating devices within the structure, which introduce forces counter to those caused by the earthquake, thus negating some or all of the seismic demand. To determine how much force to apply to an actuator involves a real-time solution of the dynamics of the structure. Sensors must measure the ground motion at the base of the structure, a structural analysis for these accelerations must be performed on a dedicated processor, and the optimum pattern of forces must be determined and applied via quick-response actuators during a time interval equal to or less than the dynamic response of the structure. Base isolation and supplemental damping are currently entering the mainstream of structural engineering, while active control is still largely the subject of research.The most recent development in earthquake engineering is performance-based design, in which the expected structural damage due to the maximum expected earthquake is quantified. If the expected damage is unacceptably high, the owner and the engineer may agree on a design in excess of building code requirements.