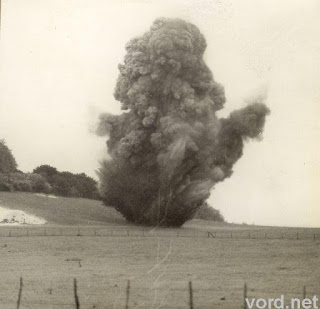 In the current era,its very essential to emphasize on blast resistant construction of important buildings.

Site Planning
Deep buried structures are safer. Walls with soil cover on the side perform well under blast loading; soil is highly effective in reducing the impact of explosions. Buildings with buried roofs are extremely successful in military applications; they can be used also in civilian constructions with security-based design.

Architectural configuration that affect the design
Convex shapes are preferred over concave shapes. The Concave shapes have a number of inside dead ends, called re-entrant corners, which trap the shock wave overpressure; examples are U- or L-shaped buildings.

Functional Planning by Grouping the Requirement
Air intake systems need to be protected by elevating them from the ground level. 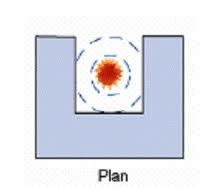 Structural Aspects of Blast Resistant Design
Objective is to offers large stiffness and significant lateral & vertical strength.
Five basic features of the building’s structural system are known to enhance hardness of the building. These features are:
(a) Large Mass & Stiffness: Buildings with large mass perform well under blast loading; lightweight constructions are unsuitable. Such buildings have large inertia and hence take a while before they respond to the severe blast overpressure. This is beneficial because before the building sets into oscillations, the blast overpressure duration is passed. Also, large mass structures often have high stiffness, which also means smaller deformations in them.
(b) Large redundancy: High redundancy in vertical & lateral load resisting systems with ductile members connecting them is one major factor for the survival of buildings under blast loading. This ensures that when localized damage occurs in any of the structural elements, re-distribution of load is possible and collapse of the structure can be prevented.
(c) Member Strengths Proportioned as per Capacity Design Concept:
Blast loading is a force applied on the building. Thus, buildings are designed to possess more vertical/lateral strength than the vertical/horizontal force imposed on them due to the blast. Further, buildings are designed as per capacity design concept. This ensures that members are prevented from undergoing brittle shear failure before they sustain ductile flexural failure. Here, it is imperative that the connections should allow this without themselves being damaged. Such an approach enhances the energy absorption capacity of the structure.
d) Resistance to Reversed Loading:
The structural design of the primary structural members (resisting vertical and lateral loads) accounts for reversal of blast overpressures loads, namely the positive pressure phase followed by negative pressure phase. Thus, structural systems with gravity load-based prestressing and with seated connections should not be used. In particular, roofing systems should be bolted or anchored down to prevent lift-off under upward pressure in buildings.
(e) Strong Connections:
Connections between the structural elements must be strong to allow large deformations without dropping strength, and thereby facilitate redistribution of loads from one vertical & lateral load resisting system to another in a ductile manner. Over the years, cast-in-situ RC constructions have performed well in many military applications, e.g., military bunkers. Extensive research and testing of cast-insitu RC structures confirms that it is possible to (a) detail RC beams to perform in a ductile manner, and (b) design columns with large cross-sectional area so that they do no buckle when large overpressures cause a sudden increase of axial loads in them.
Progressive Collapse Analysis
Two design requirements determined by the type of weapon are (1) direct effects of blast causing extensive damage to the façade and (2) localized damage due to attack on individual elements leading to progressive collapse. In progressive collapse, the failure of a member in the primary load resisting system leads to redistribution of force to the adjoining members. If the adjoining member cannot resist the additional load, then even that member fails. This process continues in the structure and eventually the building collapses. Thus, the failure of a member at the local level results in the collapse of the structure at the global level, in a progressive manner, one member at a time. Of these two design requirements, the design for the latter is the most difficult.
Thus, the main concern of ensuring lateral resistance in buildings is preventing progressive collapse. Irrespective of the building function, structural system used in it, and the level of security employed in it, every building should be designed to prevent progressive collapse. Redundancy is the first measure to ensure that there are many alternate load paths and increased number of locations where plastic hinges must occur before the structure collapses. Members where plastic hinges are likely to form should have ductile detailing incorporated in them to perform in a ductile manner, and the other non-ductile members must be designed as per capacity design concept, thus minimizing the possibility of progressive collapse.
The methodology to be employed is described below in brief for ensuring that progressive collapse does not occur:
a) Perform structural analysis of the building by removing one important element in the load path, e.g., column, load-bearing wall or beam, to simulate local damage from an explosion. The method of analysis can be both linear and nonlinear, and within that both static as well as dynamic.
(b) Check if the available load path in the remaining structure is able to resist the loading. If it can, the exercise is repeated by removing another critical element in the load path. Otherwise, the structure is rendered vulnerable.
(c) If in all possible cases of removal of an important member in the load path, one at a time, the structure is able to resist the loading, the structure is said to meet the progressive collapse requirement.
Design Methods

Three methods are identified in literature (ASCE 7, 2002) for structural design of buildings to mitigate damage due to progressive collapse when blast loading initiate collapse. These are:
(a) Indirect Method: Prescriptive guidelines that improve structural integrity are followed. These guidelines are related to selecting the structural system, locating the main lateral load resisting systems, proportioning the members, and detailing the members for ductility;
(b) Alternate-Load-Path Method: The structure is designed for the forces due to the applied gravity and wind loads considering that one critical load carrying member in the load path is lost. This method is based only on loads other than the blast loading. The help of design consultants specializing in blast effect design may be required in identifying the critical member-loss cases that give the worst effect; and
(c) Specific Local-Resistance Method: This is the most comprehensive method which includes both the blast loading as well as the nonlinear response of the structure. The method of analysis therefore covers both nonlinear and dynamic aspects of structural response. The location of blast loading is important in this analysis. Usually, blast is considered to occur in the lower storeys with the weapon under the building or at a stand-off distance from the building façade.