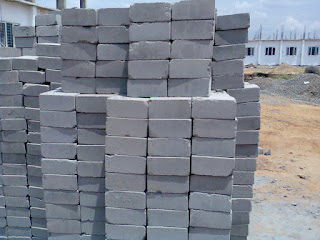 A Clay brick, which was the primary wall material, is now being replaced by FLY ASH BRICKS, which are hi-tech well-improved quality products. They are competitive in comparison to the conventional clay bricks and provide enormous indirect benefits. The country can gain a lot by gainful utilization of fly ash bricks resulting in conservation of natural resources as well as protection of environment.
COMPOSITION
The important compositions of fly ash bricks are as follows;

Fly ash contains Co2 emitted from Thermal power plants, industries using coal as a fuel emit unwanted ash and smoke from which fly ash is produced. In all the power plants and industries, they separate the fly ash by using the cyclone converter. This fly ash is then used as a raw material to manufacture of bricks. 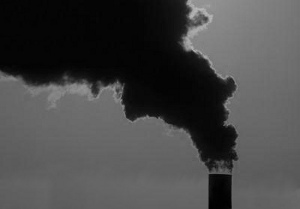 Fly ash causes severe pollution of air and water, and its disposal gobbles up large tracts of land. Well-planned programs for proper management of fly ash are therefore being undertaken to enhance the use of fly ash in various applications, so that our already perilously imbalanced environment can be protected.
MANUFACTURE
The fly ash brick is nothing but a slow setting pozzalona cement mix. The process is same as making cement in cement factories whereas the clay and limestone are burnt with coal and gypsum. And it is mixed and ground to cement.In fly ash mix also the fly ash, which is burnt clay particles (oxides of clay) obtained from burning coal, which contains clay from the mines. When hydrated lime powder, gypsum are mixed and ground in a pan, the mixture gives a slow setting pozzalona cement.While the mix is pressed at low pressure at low moisture content in hydraulic machine, which is specially designed to give high pressure load at a slow rate, in the order of 350kg/square inch.At this of rate of pressure and with holding the pressure for a desired time gives ultimate strength to fly ash bricks.
FLOWCHART SHOWING THE MANUFACTURE 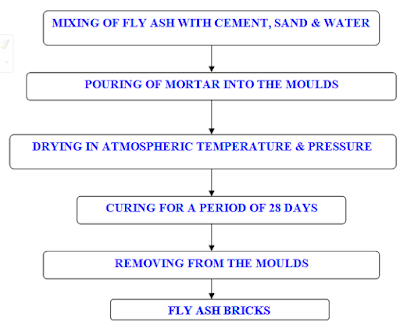 The increase in green house gases, out of which CO2 is one of the major constituents, increases the global warming year after year, causing drought and floods. The total CO2 Emissions globally account for 24,960 million tons at 1990 levels. Cement and building materials industry is one of the major contributors.
The CO2 emission is about ninety million tons out of cement and forty nine million tons out of clay bricks production in India. As per the ongoing practices in India, each million clay bricks consume about 200 tons of coal (or any other fuel with equal quantity of thermal values) and emit around 270 tons of CO2.
Fly ash bricks production in energy-free route saves the emissions totally, befitting the project to qualify under Clean Development Mechanism (CDM), as envisaged by Kyoto Protocol towards the welfare of Mother Earth. 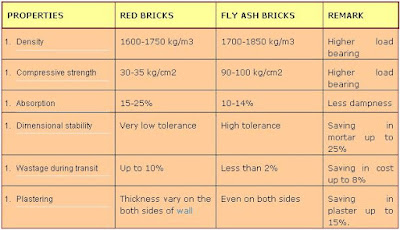