Need of a Sewer System 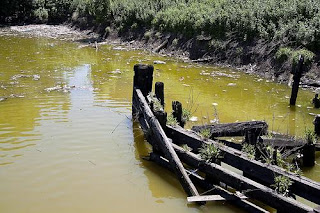 Each time you flush the toilet or you wash something down the sink's drain, you create sewage (also known in polite society as wastewater). One question that many people might ask is, "Why not simply dump this wastewater onto the ground outside the house, or into a nearby stream?" There are three main things about wastewater that make it something you don't want to release into the environment:
Chemical Characteristics of Sewage

Domestic sewage contains 99.9% water, 0.02-0.03% suspended solids and other inorganic (30%) and organic (70%) substances. Inorganic components include ammonia, chloride salts and metals. Metal industries and mines also contribute to the inorganics. Organic components include either nitrogenous compounds like proteins and amino acids and non-nitrogenous compounds like carbohydrates and lipids. Animal sewage is high in protein and lipids and plant sewage is rich in cellulose and lignin. Lipids in the form of fatty acids which escape digestion in the digestive system account for the lipids in the faeces.

Mohsin Hanif Awan He is B.Sc in Civil Engineering from "University of Engineering and Technology Peshawar,Pakistan"