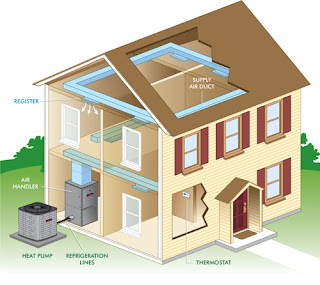 ·  Background
The last 20 years have seen massive worldwide investment in heat pump technology. The countries shown in green on the map below contain either manufacturers or suppliers of heat pumps.
In some regions of the world, heat pumps already play an important role in energy systems. This is generally as a result of government incentives and advertising. The heat pump market in the UK is drastically different to that of the world at large as can be seen in the 2 pie charts below. The UK market is dominated by the non-domestic sector whereas the global picture is the reverse. 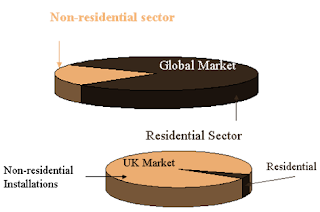 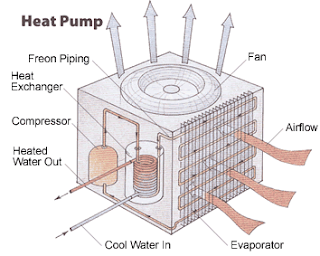 The term 'heat pump' is a slight misnomer; heat is not 'pumped', but instead is 'moved' by these devices. According to the second law of thermodynamics heat cannot spontaneously flow from a colder location to a hotter area; work is required to achieve this. Heat pumps differ in how they apply this work to move heat, but they can essentially be thought of as heat engines operating in reverse. A heat engine allows energy to flow from a hot 'source' to a cold heat 'sink', extracting a fraction of it as work in the process. Conversely, a heat pump requires work to move thermal energy from a cold source to a warmer heat sink. Since the heat pump uses a certain amount of work to move the heat, the amount of energy deposited at the hot side is greater than the energy taken from the cold side by an amount equal to the work required. Conversely, for a heat engine, the amount of energy taken from the hot side is greater than the amount of energy deposited in the cold heat sink since some of the heat has been converted to work.
One common type of heat pump works by exploiting the physical properties of an evaporating and condensing fluid known as a refrigerant.
A simple heat pump's vapor-compression refrigeration cycle:

In Japan, Sweden and the Netherlands, multi-MW heat transformers operating on the absorption cycle are used for waste heat recovery in petrochemical and steel works.
·        Domestic
Heat pumps are a feature of many homes in, for example, Switzerland, Norway and the Netherlands, but not many systems have been installed in the UK. The UK market is strongly influenced by first cost for heating systems, and gas heating is fairly cheap, widely available and fairly clean. Apart from some purpose-built demonstration houses, domestic heat pumps in the UK tend to be confined to rural areas without gas supplies. In these areas oil is the main alternative which is currently very economical.
The largest domestic market for heat pumps is in regions with a warmer climate such as Florida, USA. These regions make use of the dual functionality possible with heat pumps, providing both heating and/or air conditioning.
Air is the most common distribution medium in the mature heat pump markets of Japan and the United States. The air is either passed directly into a room by the space-conditioning unit, or distributed through a forced-air ducted system. Water distribution systems (hydronic systems) are predominantly used in Europe, Canada and the north eastern part of the United States. Conventional radiator systems require high distribution temperatures, typically 60-90°C. Today's low temperature radiators and convectors are designed for a maximum operating temperature of 45-55°C, while 30-45°C is typical for floor heating systems Because a heat pump operates most effectively when the temperature difference between the heat source and heat sink (distribution system) is small, the heat distribution temperature for space heating heat pumps should be kept as low as possible during the heating season.
About the Author

Faisal Aman He is B.Sc in Mechanical Engineering from "University of Engineering and Technology, Taxila, Pakistan"