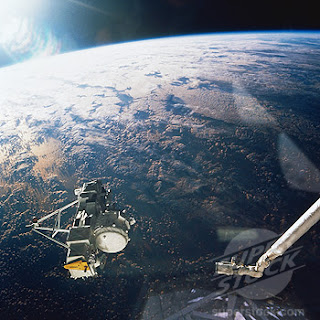 Predicting hydrologic behavior at regional scales requires heterogeneous data that are often prohibitively expensive to acquire on the ground. As a result, satellite-based remote sensing has become a powerful tool for surface hydrology. Subsurface hydrology has yet to realize the benefits of remote sensing, even though surface expressions of ground water can be monitored from space. Remotely sensed indicators of ground water may provide important data where practical alternatives are not available. The potential for remote sensing of ground water is explored here in the context of active and planned satellite-based sensors. Satellite technology is reviewed with respect to its ability to measure ground water potential and storage. Remotely sensed data are most useful where they are combined with numerical modeling, geographic information systems, and ground-based information. Remote sensing of ground water has been a Holy Grail for Hydrologists because it is stored beneath the surface and is not detected by most sensors.Satellites and sensors are being extensively for many purposes including ground water exploration.The various types of satellites, that can be used for ground water exploration are as following:-
a.         Landsat Multispectral Scanner: - The Multispectral Scanner (MSS), Landsat was launched on 1 July 1972, and was the world's first Earth observation satellite sensor. The MSS provided four spectral bands of Earth surface reflectance in the visible and near-infrared regions of the electromagnetic spectrum at a nominal 80-m spatial resolution.
b.         Landsat Thematic Mapper (TM): - Landsats 4 and 5, launched in 1982 and 1984, respectively, were augmented with an advanced version of an Earth observation sensor known as the Thematic Mapper (TM). The TM provides a significant increase in data acquisition capability over the MSS in a number of ways. The TM sensor has seven spectral bands: Six acquire Earth reflectance data, and one acquires Earth temperature data. To date, the Landsat TM sensor represents the most sophisticated satellite sensor to provide Earth observation data. The sensor's complement of seven spectral bands and offers the most comprehensive set of multispectral measurements for land and water surface mapping, monitoring, and analysis.
c.         Systeme Probatoire d'Observation de la Terra (SPOT) High Resolution Visible Sensor: - The French Systeme Probatoire d'Observation de la Terra (SPOT) Earth observing satellite system carries two High Resolution Visible (HRV) imaging sensors. First launched in 1986, the HRV provides high spatial resolution, with three spectral bands of visible and near-infrared data acquired at 20-m resolution, and a panchromatic band at 10-m resolution. The sensors can be pointed to either side of the orbital track (plus or minus 27 degrees), allowing the acquisition of stereo and repeat coverage in as short a period of one or four days.
d.         Indian Remote Sensing (IRS): - Indian has developed an indigenous capability to image Earth, particularly India, with a specific aim ground water exploration, land use, forest and flood mapping and inventory of surface water. Currently ISRO (Indian Space Research Organization) has more than a half-dozen remote sensing satellites under development, intended for launch in the next decade. The entire fleet will be a mix of niche-role and multi-role satellites which will join India's existing constellation of five polar orbiters: IRS-1A, IRS-1B, IRS-1C, IRS-1D, IRS-P2, IRS-P3.
e.         IKONOS: - IKONOS, the world’s first one-meter resolution, commercial imaging satellite, was launched in September 1999. The satellite has four multispectral bands in the visible and Near Infrared at a spatial resolution of 4 meters, and a Panchromatic 1 meter band covering the same spectral range.