An earthquake is an oscillatory violent movement of the earth’s surface that follows a release of energy in the earth’s crust. 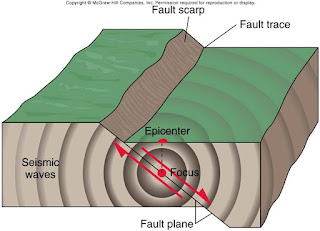 Seismic Waves
The energy released by earthquakes is propagated by different types of waves
Body waves
Surface waves include
Body waves originate at the rupture zone, include
P-waves (primary)
(particle movement parallel to the direction of propagation of the   waves),
S-waves (secondary or shear waves),
(particle movement perpendicular to the direction of   propagation).
Surface waves include