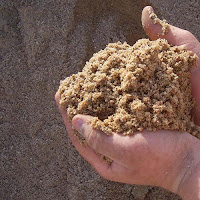 Since natural sand for concrete is running short globally, due to the increasing influence of environment protection legislation, and because accessible reserves are dwindling, it is obliged to improve the quality of manufactured sand, and use it in greater quantities as a substitute for the natural product. However, producing well-shaped and properly graded sand also generates micro-fine particles as an inevitable by-product. In this study, the specific size range which has the greatest detrimental effect to concrete has been successfully discovered, and hence a method of using micro-fines most effectively can be proposed.

The Japanese standard JIS 5005 restricts the maxi-mum permissible content of 150 μ m or finer to less than 15%, and 75 μm or finer to less than 7% (by decantation method). Excessive content particularly of 75 μm or less is considered to have a detrimental effect to the properties of concrete. It is understood that some EU standards have already eased or deregulated the allowances of micro-fine particles contained in the sand. In practice, however, end-users seem still to avoid the inclusion of micro-fines, unconvinced that such material can be beneficial in the concrete mix. Currently, therefore, almost all manufactured sand producers eliminate substantial volumes of fine particles from the final product, thereby reducing sand recovery, and leading to additional cost in disposal of the waste.
Two methods were used to identify the optimum inclusion of micro-fine particles (herein referred to as Original Micro-Fine, or OMF) which is a by-product of dry-crushed sand (herein referred to as Base Sand, or BSa) in manufactured sand for concrete. The first approach was simply to increase the volume of micro-fines in their original form, herein referred to as the Original Fine Grading Distribution (OFG). The second was to classify OMF into coarse and fine fractions and reintroduce only the coarser fraction (herein referred to as the Modified Fine Grading Distribution, or MFG) to BSa in increasing blending ratios. Several trial concrete mixes were performed to compare the effect of varying gradation and proportion of the reintroduced fines on the concrete. In the case of OFG, increasing the proportion of OMF proved detrimental to the quality of the concrete, including a reduction in workability (Kaya 2002). With MFG, however, it was possible to avoid negative effects on the fresh properties and other key qualities of concrete, while even substantial volumes of OMF were added (Kaya 2008). The specific size range of particles within the micro-fines that has an undesirable effect to the concrete was identified.

A bulk sample of dry manufactured sand was made using a dry and grain shape improving sand-making process, designed to give suitable particle size distribution and shape for use as concrete sand.
Ten samples were constructed as follows: One plain BSa, four gradations of MFG added to BSa, and five gradations of OFG added to BSa. For the four samples of MFG, OMF was classified into four different coarse fractions, +120 μm, +75 μm, +40 μm and +20 μm (herein referred to as Modified Micro-Fine, or MMF) and added back to BSa respectively. These ratios were equivalent to 3.75%, 9.75%, 12.83% and 18.0% with the volume of BSa being taken as 100%.For the five samples of OFG, corresponding percent-ages were reintroduced, 3.75%, 9.75%, 12.83% and 18.0%, together with a final sample including the original proportion of micro-fines, equivalent to 25% (20%/80%).
These samples were used as fine aggregate for trial concrete mixes. The same unit water content was used for all samples, providing comparison of slump and compressive strength results. Figure 1 shows the production process for fine aggregate, and Table 1 shows the test sample number, code and blending ratios.

Table 4 is a summary of the tests. Slump and compressive strength are compared for corresponding blending ratios of OFG and MFG.

Figure 4 shows how slump varied as blending ratio increased. It can be seen that slump for OFG constantly decreased. However, that for MFG was maintained down to 13% blend, dropped slowly as far as 18% bend, and fell drastically beyond 18%. The drastic fall after 18% is considered to be caused by fine particles of less than 20 μm. Beyond that size, the total surface area of MFG is considerably smaller than that of OFG in each corresponding blending ratio. Figure 6 shows the correlation between slump and surface area. Both OFG and MFG have similar curves, the greater the surface area, the less the slump.