Effect of Deflection on Flatness of Elevated Slabs

When floor flatness and levelness of elevated slabs are measured using F-number technology, timing of measurements is critical because of the short-term deflection between shoring and reshoring and long-term deflection after shores are removed. This deflection decreases F-numbers that then may not meet specified values. The higher the initial FF number, the greater the negative eFFect of deflection. Because of this, Section 4.8.4.1 of ACI 117-06 and ACI 117-10, "Standard Tolerances for Concrete Construction and Materials," requires that, "Floor test surfaces shall be measured and reported within 72 hours after completion of slab concrete finishing operations and before removal of any supporting shores."
The required time limit applies to both F-number (FF and FL) and gap-under-straightedge measurements made in accordance with ACI 117-06 and ACI 117-10. But it wasn't always that way. 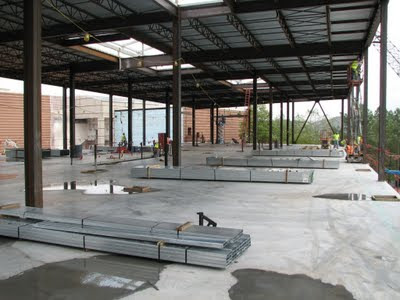 Requirements for timing of flatness measurements
The first ACI tolerance document, ACI 117-81, stated, "Floor tolerance measurements should be made the day after a concrete floor is finished and before shoring is removed, in order to eliminate any effects of shrinkage, curling, and deflection."
When ACI 117-90 was published, however, Section 4.5 included no time requirement for measuring FF floor flatness, and the Commentary gave the following rationale: "Since neither deflection nor curling will significantly change a floor's FF value, there is no time limit on the measurement of this characteristic."
The statement in the Commentary indicating that "neither deflection nor curling will significantly change a floor's FF value" has since been shown to be incorrect. This is why ACI 117-06 and ACI 117-10 require that all measurements – FF, FL, and the gap under a straightedge – be made within 72 hours. However, not all specifiers and contractors are aware of this change. The next two sections explore the effects of deflection on F-numbers and why the change was made.

Measured F-numbers on deflected elevated slabs
In an article titled "Floor Tolerances," published in Concrete International in June 1988, Eldon Tipping reported floor flatness and levelness measurements made on cast-in-place concrete structures using wide-module pan-joist construction. The depth of the total framing system was 20.5 inches, which included the 4.5 in. floor slab thickness. The joists were 7 in. wide and spaced at 5 feet on center. Slab profiles were measured using the F-number system for shored and reshored conditions, and after the shores had been removed.
The composite flatness F-number values before and after shore removal were FF 24.4 and 24.3, respectively. Thus, the composite flatness F-number dropped less than 1 percent after shore removal. This led to the statement that, "There was a negligible change in the flatness F-number between the shored and shores removed condition."
A second article co-authored by Tipping and K.S. Rajagopalan in Concrete International, titled "Flatness and Levelness of Elevated Surfaces," reported floor flatness and levelness measurements made on a similar cast-in-place concrete structures but with 6-in.-wide joists spaced at 6 ft. Again, the shored and unshored FF numbers were nearly identical at 26.0 and 25.7, respectively. The authors' conclusion was that, "The lack of change in these values from the supported condition confirms the assumption of F-number theory that deflections have a minimal impact on flatness F-numbers."
In these two reported studies, the assumption that deflections have a minimal impact on flatness F-numbers was confirmed primarily because the buildings were stiff. For one building, the initial camber at mid-span of the 44-foot-long beam was 0.625 in. and for the 38-foot-long beam the camber was 0.25 in. The cambers for these spans represent dead-load deflections of L/845 and L/1824, indicating a very stiff floor system.
No cambers were required on the other building, but deflections were observed from the measured surface profiles. The engineer of record calculated the total initial deflection of about 1/2 in. at the midpoint of the larger bays. This agreed well with the measured deflection of about 0.4 in. based on surface profiles. The largest bay on this project was 39 ft. long. This corresponds to a deflection magnitude of L/1170, which again indicates a very stiff framing system.
These two cast-in-place concrete buildings were very stiff as compared with buildings incorporating concrete slabs on metal decking supported by a structural steel frame (see the analysis to follow). But the conclusion that FF is not affected significantly by dead load deflections has been applied to all building types. The problem with this can be illustrated by using the analysis method described below.

Effect of deflection on F-numbers of elevated slabs
Section 4.5.5 of ACI 117R-90 stated that, "neither deflection nor curling will significantly change a floor's FF value." No references in support of this claim were cited, although the claim may have been based on the two studies described previously. To predict what would happen to FF numbers if shores were removed and dead load deflection occurred before F-numbers were measured, we used the mathematical analysis described below.
First, we simulated initial F-number profiles representing varying floor quality, then superimposed structural deflection values on the profiles. The deflection was assumed to vary with position along the beam, with the initial deflection equal to L/360, L/480, and L/960 – deflection values typically used in building code requirements, where L is the length of the span. The deflections were calculated at 1 ft. increments along the beam and added to the simulated F-number readings at the same increment. A 30-foot span was assumed because it is a common bay size for steel buildings. Table 1 shows the results of this simulation.
The analysis shows that for a stiff structure and an elevated slab with an FF 25 value, a deflection of L/960 (3/8 in. for a 30-foot span) decreases FF by only 4 percent. Even for an initial profile representing an FF 30 floor, a deflection of L/960 affects the FF value by only about 7 percent. But for an initial FF value of 50, the L/960 deflection causes about a 24 percent decrease in FF. Thus, the higher the initial FF value, the greater the effect of dead load deflection. A composite overall flatness of FF 35 is the maximum specified value typically used for suspended slabs (ACI 302.1R-04). Based on the analysis and at this specified value, a deflection of L/960 – which indicates a stiff building – will probably result in a reduction in FF no greater than about 10 percent. Unfortunately, the same cannot be said for deflection values of L/480 and L/360, which are common for structural steel framing systems with concrete slabs placed on metal decking. Because these slabs deflect much more than floors in reinforced concrete frame buildings, the effect on FF can also be expected to be greater.

Observing the time limit on F-number measurement is essential
To ensure that F-number measurements reflect only the floor flatness and levelness resulting from the concrete contractor's efforts, these measurements must be made within 72 hours after completion of slab concrete finishing operations and before removal of any supporting shores. Otherwise, low F-numbers are likely to be the result of dead-load slab deflection. For slabs placed on unshored metal decking, deflection occurs while the slab is being placed, and may make it diFFicult to achieve flatness values above FF 25 without the use of specialized equipment and elevation monitoring during slab placement. In such slabs, flatness is improved by adding more concrete to compensate for the deflection.
If floor flatness is measured months or even years after the building has been in service, F-numbers will be even more adversely affected because of long-term deflection resulting from creep.
More information about deflection analyses is contained in Tolerances for Cast-in-Place Concrete Buildings, a book written by the authors of this article and published by the American Society of Concrete Contractors (www.ascconline.org).