Placing concrete under water is a specialized subject and should be avoided whenever practical to do so. Where concrete works have to be constructed below water level as in the case of marine works, deep foundations of bridges etc; one of the two courses may be adopted. Either water may be excluded temporarily from the site by using cofferdams, caissons, pumps, dewatering equipment OR Concrete may be placed in water using special methods.

Whilst concrete will set and harden under water its placing presents several problems. The most difficult is the prevention of segregation and loss of cement. Formwork except for simpler forms of construction, is difficult to place accurately and in all cases must be anchored firmly. In view of these difficulties, underwater concreting in generally confined to mass un-reinforced work and consideration should always be given to use of pre-cast block for the whole work or as permanent formwork.


Equipment and Techniques of Concreting Under Water

It consist of lowering a special bucket containing concrete to the bottom of foundation and opening it there slowly to allow concrete to flow out gently and without causing turbulence. Subsequent buckets are lowered(landed) on the previously placed concrete. Top of the bucket should be covered and should have means to open the gate from above water. Special buckets are made for under water placing with a sloping top having small opening to minimize water surge. see figure attached.
Concrete for the purpose will have 6-7 sacks of cement per cuyd, 6“ - 7" slump, 1.5“ _ 2" maximum size of aggregate and sand content higher than normal; 40% or more. Concrete for foundation of Franciso Bay Bridge was placed in water as deep as 240 ft with buckets. Bucket placement is a good way to start a placement by the tremie method. The later is probably faster and possibly superior once started. Tremie is operated when concrete layer 2 to 3 ft thick is placed.
It consist of placing concrete through a vertical pipe, allowing the concrete to flow from the bottom. The bottom of the tremie is kept submerged in the concrete all the times, and the concrete flows into the mass of previously placed concrete.A tremie consist of a pipe usually 10"-12" inch diameter with a hopper or funnel at the upper end. The equipment is adequately supported and arranged so that it can be raised and lengths of pipe can be removed if necessary as the level of concrete rises in the form. The spacing of the tremie should not be more than 12 ft to 16 ft apart or 8' from the sides or ends of enclosure.

Concrete is delivered to the hopper by bucket, truck mixer, pump or conveyor. The delivery must be at a good rate and without interruption. Delay for any reason impairs the free flowing mobility of the mass into which concrete is being placed. Plugged pipe and cold joints can result from delays.There are two basic methods of starting a tremie, which may be called the " wet pipe" and "dry pipe" method.
Pumps can carry out under water concreting satisfactorily. Muck should be removed. The end of the concrete pump line should be plugged and lowered to the bottom. The line should be filled with concrete, forcing the plug out. Concrete pumping continues and pump line is raised periodically as resistance increases. Sections of pipe line are removed above water as work progresses.
Originally developed for structural concrete repairs, pre-placed or pre packed aggregate concrete, is composed of coarse aggregate placed in the form and a special mortar is then injected into the form starting at the bottom to fill the voids and create a unit mass. It effects saving in time and money.Some advantages include, 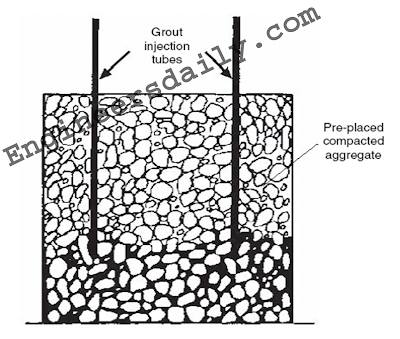