Basics of a Bridge 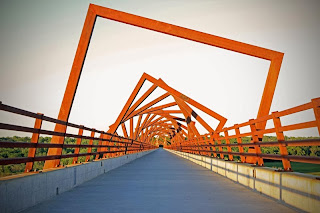 Because of the wide range of structural possibilities, this article shows only the most common fixed (non-movable) bridge types. The drawings are not to scale. Additional related info is found on the other Terminology pages which are linked to the left.
The four main factors are used in describing a bridge. By combining these terms one may give a general description of most bridge types.

The three basic types of spans are shown below. Any of these spans may be constructed using beams, girders or trusses. Arch bridges are either simple or continuous (hinged). A cantilever bridge may also include a suspended span.

Simple deck beam bridges are usually metal or reinforced concrete. Other beam and girder types are constructed of metal. The end section of the two deck configuration shows the cross-bracing commonly used between beams. The pony end section shows knee braces which prevent deflection where the girders and deck meet.

One method of increasing a girder's load capacity while minimizing its web depth is to add haunches at the supported ends. Usually the center section is a standard shape with parallel flanges; curved or angled flanged ends are riveted or bolted using splice plates. Because of the restrictions incurred in transporting large beams to the construction site, shorter, more manageable lengths are often joined on-site using splice plates.

Many modern bridges use new designs developed using computer stress analysis. The rigid frame type has superstructure and substructure which are integrated. Commonly, the legs or the intersection of the leg and deck are a single piece which is riveted to other sections.

Orthotropic beams are modular shapes which resist stress in multiple directions at once. They vary in cross-section and may be open or closed shapes.

There are several ways to classify arch bridges. The placement of the deck in relation to the superstructure provides the descriptive terms used in all bridges: deck, pony, and through.
Also the type of connections used at the supports and the midpoint of the arch may be used - - counting the number of hinges which allow the structure to respond to varying stresses and loads. A through arch is shown, but this applies to all type of arch bridges.

Another method of classification is found in the configuration of the arch. Examples of solid-ribbed, brace-ribbed (trussed arch) and spandrel-braced arches are shown. A solid-ribbed arch is commonly constructed using curved girder sections. A brace-ribbed arch has a curved through truss rising above the deck. A spandrel-braced arch or open spandrel deck arch carries the deck on top of the arch.

Some metal bridges which appear to be open spandrel deck arch are, in fact, cantilever; these rely on diagonal bracing. A true arch bridge relies on vertical members to transmit the load which is carried by the arch.

The tied arch (bowstring) type is commonly used for suspension bridges; the arch may be trussed or solid. The trusses which comprise the arch will vary in configuration, but commonly use Pratt or Warren webbing. While a typical arch bridge passes its load to bearings at its abutment; a tied arch resists spreading (drift) at its bearings by using the deck as a tie piece.

Masonry bridges, constructed in stone and concrete, may have open or closed spandrels A closed spandrel is usually filled with rubble and faced with dressed stone or concrete. Occasionally, reinforced concrete is used in building pony arch types

A truss is a structure made of many smaller parts. Once constructed of wooden timbers, and later including iron tension members, most truss bridges are built of metal. Types of truss bridges are also identified by the terms deck, pony and through which describe the placement of the travel surface in relation to the superstructure (see drawings above). The king post truss is the simplest type; the queen post truss adds a horizontal top chord to achieve a longer span, but the center panel tends to be less rigid due to its lack of diagonal bracing.

You may also like to learn to analyze trusses.