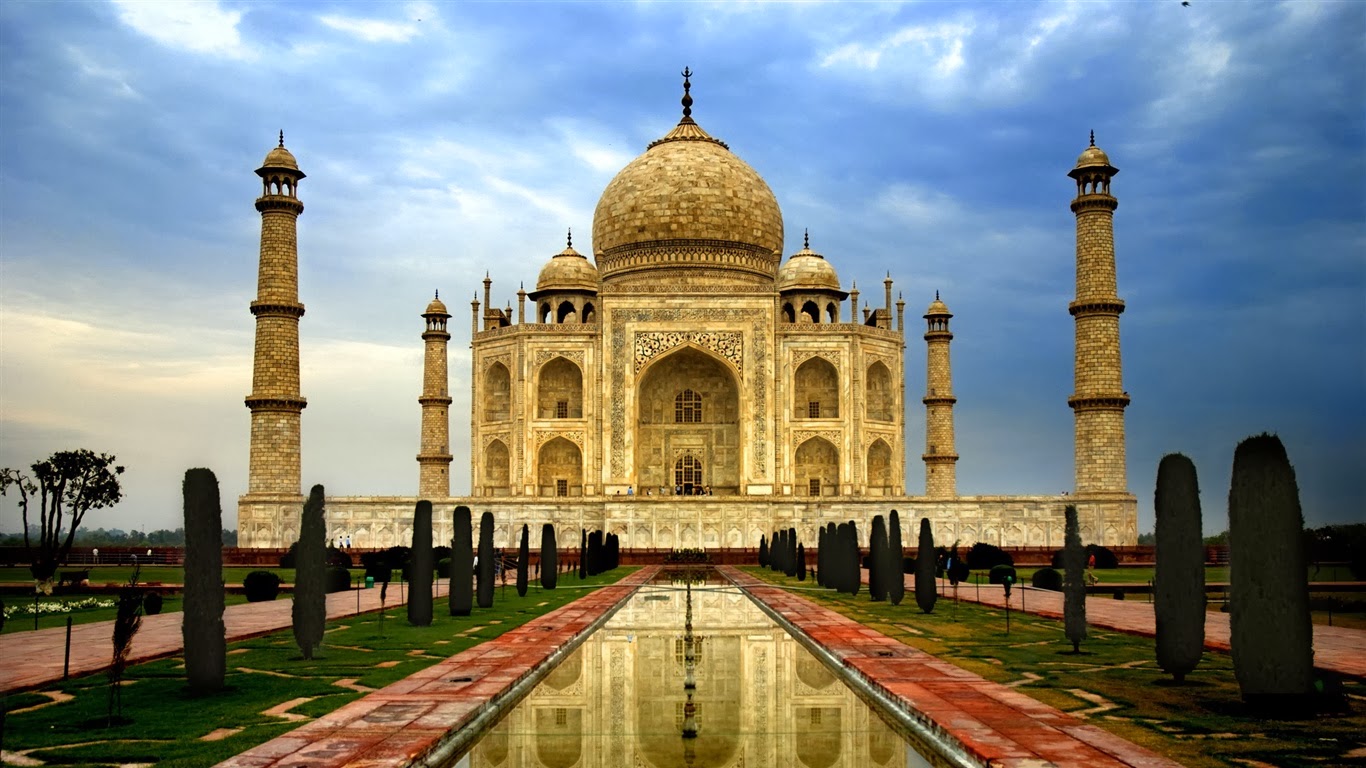 There is an increasing awareness to protect historical monuments, in future earthquakes. Taj Mahal is one such monument known for its cultural heritage worldwide and must be protected from damage. The strength evaluation of the structure taking into account future earthquake forces besides gravity and other loads is of concern for determining its safety. The seismic evaluation forms the essential step for retrofitting of such structures under occasional earthquake loads. In the present study, dynamic analysis of the Taj Mahal monument has been carried out on the basis of two simplified 3D mathematical models for fixed and flexible base condition using IS code and site dependent spectra. The free vibration characteristics and seismic response for bending moments, bending stresses, torsional moments, shear forces and axial forces have been studied.

The Taj Mahal in one of the finest architectural monuments of the world and has been included in the cultural treasures of the world heritage. Because of the increasing awareness to protect the historical monuments and its importance, seismic safety evaluation of the marble mausoleum is of great value for its future safety against possible earthquakes.

The monument lies in the seismic zone lii of India on the bank of river Yamuna in the historical city of Agra. The structure has survived small to moderate earthquakes in its life. The Taj Mahal monument (Figure 1) consists of a central main dome resting on two storey thick brick masonry walls square in plan, four small domes each at corner with four 40m high independent minars at the four corners. The whole monument is resting on large platform of thick brick masonry raft which is approximately ISm above the ground level. The center to center distance of columns is 32m and the storey height is measured as 11 m. The foundation soil consists of a deep alluvial deposit.
MODELING OF THE STRUCTURE

Dynamic analysis of the monument has been carried out for two simplified 3D mathematical models (i) fixed base and (ii) flexible base conditions. The first model is considered fixed at the center of raft while other is considered to be resting on soil springs. Figure 2 shows the 3D mathematical model of the complete structure, each portion of structure wall/ dome are represented by assemblage of beam elements with 6 degree offreedom at each node.

MODELING OF THE FOUNDATION

There is sandy soil strata beneath the monument having the weight densities 1.8 ton/m3 and 1.6 ton/m3 at masjid site and mehman-khana site respectively. The Poisson's ratio is 0.25. The sandy soil is followed by clayey soil. Both the sandy and clayey soil strata beneath the monument are submerged. No material change in the mechanical properties of the various soil layers would therefore occur due to further impoundment of water in the river Yamuna.

The raft foundation is solid square platform measuring approximately l00m x l00m in plan and 35m thick The portion of the raft above the ground level is about 18m. The raft is built in brick masonry consisting of thick fire burnt clay bricks and mortar joints of varying thickness. The platform rests on thick sandy layer followed by clayey layer underneath.In the two mathematical models the bottom most vertical members are assumed to be rigid and half the weight of the raft is lumped at the four bottom nodes

Based on the meager data published in the literature, soil spring constants for an embedded rnassless rigid rectangular foundation which forms a prism have been used. The increase in stiffness for embedment leads to a factor with which the value for surface foundation is multiplied and which is for surface foundation equal to one. For three different values of shear wave velocities, different soil spring constants are calculated and one fourth of each spring constant is used at all the four bottom most nodes as shown in Fig. 2.

Materials used in the Taj Mahal are sand stone, brick work in lime mortar and marble for cladding. Modulus of elasticity, Poisson's ratio and unit weight densities of all the materials are given in Table 1. The unit weights of soils at masjid site is 1.8 tonfm3 and at mehman-khana site is 1.6 tonfm3. The unit weight of soil for analysis purposes is taken as 1. 7 tonfm3, the average of weight densities at the above two sites. The Poisson's ratio for the soil is taken as 0.25. The analysis has been carried out for three different shear wave velocities, 158 m/sec, 300 rnlsec and 600 m/sec and shear modulii have been calculated accordingly.
The site dependent spectra has been worked out (EQ 92-1 0) at the site of Taj Mahal monument, taking into consideration local soil conditions, geology and seismic history. The zero period acceleration for this spectra is 0.2g while it is 0.1g for code response spectra. The response spectrum analysis has been carried out for both fixed base and flexible base models using IS code spectra and site dependent spectra. For fixed base condition damping of the structure has been taken to be 7% of critical and for flexible base condition 10%. As the city of Agra falls in seismic zone Ill, zone factor is taken as 0.2, importance factor as 1.5 and soil foundation factor as 1.2 for the analysis using code spectra. The digitized values of spectral acceleration (Sa/g) for IS code as well as site dependent spectra are given in Table 2 both for 7% and 10% damping.
RESULTS OF ANALYSIS

Based on the dynamic analysis carried out for the Taj Mahal monument, the free vibration characteristics and seismic response for bending moments, bending stresses, torsional moments, shear forces and axial forces have been studied and are presented herein. A comparative study of structure with fixed base and spring base has also been made.

Table 3 shows the time periods of the structure in fixed base as well as in the three different cases of the flexible base condition. The fundamental period for the model with fixed base works out to be 0.487 sec which is very close to the period of the model with spring base and shear wave velocity (Vs) 600 m/sec.

The bending stresses at the bottom of main and small domes for fixed and spring base conditions are given in Table 6 and 7 using code spectra and site dependent spectra respectively. It is observed that stresses developed are more in fixed base model as compared to the three cases of the spring base model.
CONCLUSIONS

The paper describes various aspects of 3D seismic analysis and safety evaluation of Taj Mahal monument with the aim of retrofitting of structure for future earthquake. The influence of variation of soil properties on seismic response has been particularly studied. It is found that bending stresses in the domes are much smaller for soft soil conditions as compared to fixed base situation.