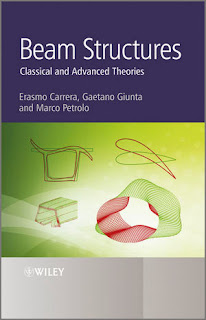 Beam models have made it possible to solve a large number of engineering problems over the last two centuries. Early developments, based on kinematic intuitions (bending theories), by pioneers such as Leonardo da Vinci, Euler, Bernoulli, Navier, and Barre de Saint Venant, have permitted us to consider the most general three-dimensional (3D) problem as a one-dimensional (1D) problem in which the unknowns only depend on the beam-axis position. These early theories are known as engineering beam theories (EBTs) or the Euler–Bernoulli beam theory (EBBT). Recent historical reviews have proposed that these theories should be referred to as the DaVinci–Euler–Bernoulli beam theory (DEBBT). The drawbacks of EBT are due to the intrinsic decoupling of bending and torsion (cross-section warping is not addressed by EBT) as well as to the difficulties involved in evaluating the additional five (normal and shear) stress components that are not provided by the Navier formula. Many torsion-beam theories which are effective for different types of beam sections are known. Many refinements of original EBT kinematics have been proposed. Amongst these, the one attributed to Timoshenko in which transverse shear deformations are included should be mentioned. The other refined theories mentioned herein are those by Vlasov and by Wagner, both of which lead to improved strain/stress field descriptions.
The book can be downloaded from the link below.Voila!
Download