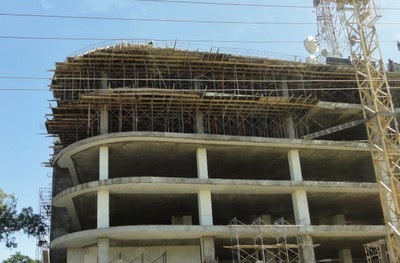 The ACI Direct Design technique is presented in Section 13.6 of ACI 318. A flat plate system must meet several requirements for the direct design method to be applicable.
The direct design technique reduces the general slab structure to smaller panels within the slab, which are designed independently. In Figure 1, a typical slab panel, or slab beam, is shown by the hatched pattern. Several key dimensions are given. The distance l1 is the spacing between column center lines in the direction parallel to reinforcement to be designed. The distance l2 is the width of the slab-beam in the direction transverse to the reinforcement to be designed. The distance ln is the clear spacing between columns in the same direction as l1, and becomes the effective length of the slab-beam for the distribution of bending moment in the panel.
To compute the design moments at various sections throughout the panel, the distributed load on the panel, w, must be computed. This load is the ultimate factored gravity load on the slab and is computed using Section 9.2 of ACI 318 [2]. The fundamental calculation for a slab panel in the direct design procedure is the computation of the total static moment, M0. For a slab-beam, the total static moment is equal to the average of the negative moments at each end of the member plus the maximum positive moment throughout the member. The formulation for M0 is shown in Equation 1 [2].


The total static moment is then distributed throughout the slab panel according to the rules of ACI 318 Sections 13.6.3, 13.6.4 and 13.6.6. Depending on the location of the panel within the structure, M0 is distibuted in different ways. For instance, for an internal slab-beam, 65% of M0 is distributed to the negative factored moment at the column faces, and 35% of M0 is distributed to the positive factored moment at the midspan. If the span terminates at an outside edge or at special restraints such as a edge beams, the distribution of M0 changes according to the table in ACI 318 Section 13.6.3.3.
Once the total static moment has been computed and distributed between the positive and negative moment locations of the slab-beam, these moments must be distributed between column and middle strips. For a general case, the layout of the column and middle strips is shown in Figure 1. ACI 318 defines a column strip as “a design strip with a width on each side of a column centerline equal to 0.25l2 or 0.25l1, whichever is less ... A middle strip is a design strip bounded by two column strips” [1]. The percentages of the total static moment to be distributed to the column and middle strips are presented in tabular form in ACI 318 Sections 13.6.4 and 13.6.6 [1]. Note that the design moment for the middle strip is divided to each side of the column strip, and subsequently added to the design moment in the middle strip from adjacent slab panels, and then the reinforcement is placed in the middle strip uniformly. The moment distribution factors are based on both experimental and analytical studies of moments in linear elastic slabs, and are intended to “ensure that steel stresses are not excessively high at service load so that crack widths and deflections remain within acceptable bounds” [1].