Soil compaction is defined as the method of mechanically increasing the density of soil. In construction, this is a significant part of the building process.

If performed improperly, settlement of the soil could occur and result in unnecessary maintenance costs or structure failure. Almost all types of building sites and construction projects utilize mechanical compaction techniques. 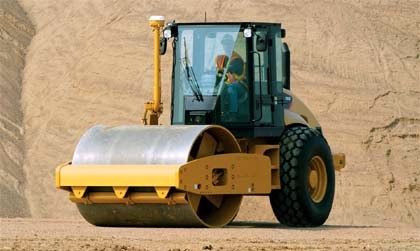 There are four types of compaction effort on soil or asphalt:
■ Vibration
■ Impact
■ Kneading
■ Pressure
These different types of effort are found in the two principle types of compaction force: static and vibratory. Static force is simply the deadweight of the machine, applying downward force on the soil surface, compressing the soil particles. The only way to change the effective compaction force is by adding or subtracting the weight of the machine. Static compaction is confined to upper soil layers and is limited to any appreciable depth. Kneading and pressure are two examples of static compaction.

Vibratory force uses a mechanism, usually engine-driven, to create a downward force in addition to the machine’s static weight. The vibrating mechanism is usually a rotating eccentric weight or piston/spring combination (in rammers). The compactors deliver a rapid sequence of blows (impacts) to the surface, thereby affecting the top layers as well as deeper layers. Vibration moves through the material, setting particles in motion and moving them closer together for the highest density possible. Based on the materials being compacted, a certain amount of force must be used to overcome the cohesive nature of particular particles.

Every soil type behaves differently with respect to maximum density and optimum moisture. Therefore, each soil type has its own unique requirements and controls both in the field and for testing purposes. Soil types are commonly classified by grain size, determined by passing the soil through a series of sieves to screen or separate the different grain sizes. [See Figure 3]

Soil classification is categorized into 15 groups, a system set up by AASHTO (American Association of State Highway and Transportation Officials). Soils found in nature are almost always a combination of soil types. A well-graded soil consists of a wide range of particle sizes with the smaller particles filling voids between larger particles. The result is a dense structure that lends itself well to compaction.

A soil’s makeup determines the best compaction method to use. There are three basic soil groups:
■ Cohesive
■ Granular
■ Organic (this soil is not suitable for compaction and will not be discussed here)

Cohesive soils have the smallest particles. Clay has a particle size range of .00004" to .002". Silt ranges from .0002" to .003". Clay is used in embankment fills and retaining pond beds.
Characteristics

Cohesive soils are dense and tightly bound together by molecular attraction. They are plastic when wet and can be molded, but become very hard when dry. Proper water content, evenly distributed, is critical for proper compaction. Cohesive soils usually require a force such as impact or pressure. Silt has a noticeably lower cohesion than clay. However, silt is still heavily reliant on water content. [See Figure 4]
Granular soils

Granular soils range in particle size from .003" to .08" (sand) and .08" to 1.0" (fine to medium gravel). Granular soils are known for their water-draining properties.
Characteristics
Sand and gravel obtain maximum density in either a fully dry or saturated state. Testing curves are relatively flat so density can be obtained regardless of water content.
The tables on the following pages give a basic indication of soils used in particular construction applications. [See Figures 5, 6 & 7]
Effect of moisture

The response of soil to moisture is very important, as the soil must carry the load year-round. Rain, for example, may transform soil into a plastic state or even into a liquid. In this state, soil has very little or no load-bearing ability.
Moisture vs soil density
Moisture content of the soil is vital to proper compaction. Moisture acts as a lubricant within soil, sliding the particles together. Too little moisture means inadequate compaction—the particles cannot move past each other to achieve density. Too much moisture leaves water-filled voids and subsequently weakens the load-bearing ability. The highest density for most soils is at a certain water content for a given compaction effort. The drier the soil, the more resistant it is to compaction. In a water-saturated state the voids between particles are partially filled with water, creating an apparent cohesion that binds them together. This cohesion increases as the particle size decreases (as in clay-type soils). [See Figure 8]