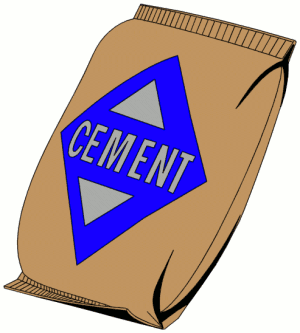 About 90-95% of a Portland cement is comprised of the four main cement minerals, which are C3S, C2S, C3A, and C4AF, with the remainder consisting of calcium sulfate, alkali sulfates, unreacted (free) CaO, MgO, and other minor constituents left over from the clinkering and grinding steps. The four cement minerals play very different roles in the hydration process that converts the dry cement into hardened cement paste. The C3S and the C2S contribute virtually all of the beneficial properties by generating the main hydration product, C-S-H gel. However, the C3S hydrates much more quickly than the C2S and thus is responsible for the early strength development. The C3A and C4AF minerals also hydrate, but the products that are formed contribute little to the properties of the cement paste. These minerals are present because pure calcium silicate cements would be virtually impossible to produce economically.


C3S is the most abundant mineral in portland cement, occupying 40–70 wt% of the cement, and it is also the most important. The hydration of C3S gives cement pastes most of its strength, particularly at early times.
Pure C3S can form with three different crystal structures. At temperatures below 980˚C the equilibrium structure is triclinic. At temperatures between 980˚C – 1070˚C the structure is monoclinic, and above 1070˚C it is rhombohedral. In addition, the triclinic and monoclinic structures each have three polymorphs, so there are a total of seven possible structures. However, all of these structures are rather similar and there are no significant differences in the reactivity. The most important feature of the structure is an awkward and asymmetric packing of the calcium and oxygen ions that leaves large “holes” in the crystal lattice. Essentially, the ions do not fit together very well, causing the crystal structure to have a high internal energy. As a result, C3S is highly reactive.
The C3S that forms in a cement clinker contains about 3-4% of oxides other than CaO and SiO2. Strictly speaking, this mineral should therefore be called alite rather than C3S. In a typical clinker the C3S would contain about 1 wt% each of MgO, Al2O3, and Fe2O3, along with much smaller amounts of Na2O, K2O, P2O5, and SO3. These amounts can vary considerably with the composition of the raw materials used to make the cement, however. Of the three major impurities, Mg and Fe replace Ca, while Al replaces Si.
One effect of the impurities is to “stabilize” the monoclinic structure, meaning that the structural transformation from monoclinic to triclinic that would normally occur on cooling is prevented. Most cements thus contain one of the monoclinic polymorphs of C3S.


As with C3S, C2S can form with a variety of different structures. There is a high temperature “a” structure, “b” structure which is stable at intermediate temperatures, and a low temperature “g” structure. An important aspect of C2S is that g-C2S has a very stable crystal structure that is completely unreactive in water. Fortunately, the “b” structure is easily stabilized by the other
oxide components of the clinker and thus the “g” form is never present in portland cement. The crystal structure of b-C2S is irregular, but considerably less so than that of C3S, and this accounts for the lower reactivity of C2S. The C2S in cement contains slightly higher levels of impurities than C3S.


Tricalcium aluminate (C3A) comprises anywhere from zero to 14% of a portland cement. Like C3S, it is highly reactive, releasing a significant amount of exothermic heat during the early hydration period. Unfortunately, the hydration products of formed from C3A contribute little to the strength or other engineering properties of cement paste. In certain environmental conditions (i.e., the presence of sulfate ions), C3A and its products can actually harm the concrete by participating in expansive reactions that lead to stress and cracking.
Pure C3A forms only with a cubic crystal structure. The structure is characterized by Ca+2 atoms and rings of six AlO4 tetrahedra. As with C3S, the bonds are distorted from their equilibrium positions, leading to a high internal energy and thus a high reactivity. Significant amounts of CaO and the Al2O3 in the C3A structure can be replaced by other oxides, and at high levels of substitution this can lead to other crystal structures. The C3A in portland cement clinker, which typically contains about 13% oxide substitution, is primarily cubic, with smaller amounts of orthorhombic C3A. The C3A and C4AF minerals form by simultaneous precipitation as the liquid phase formed during the clinkering process cools, and thus they are closely intermixed. This makes it difficult to ascertain the exact compositions of the two phases. The cubic form generally contains ~4% substitution of SiO2, ~5% substitution of Fe2O3, and about 1% each of Na2O, K2O, and MgO. The orthorhombic form has similar levels, but with a greater (~5%) substitution of K2O.


A stable compound with any composition between C2A and C2F can be formed, and the cement mineral termed C4AF is an approximation that simply the represents the midpoint of this compositional series. The actual composition of C4AF in cement clinker is generally higher in aluminum than in iron, and there is considerable substitution of SiO2 and MgO.