It is now over a century since the phenomenon of x-radiation was discovered by Wilhelm Conrad Roëntgen. It was soon realized that x-rays have wavelengths in the angstrom range, are sufficiently energetic to penetrate solids, and are well poised to probe their internal structure. Based on these findings quite a few useful tools and techniques for materials analysis and evaluation have been developed and perfected for application. 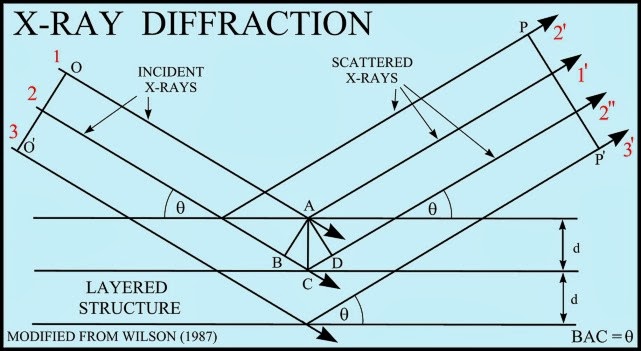 Among them, there are two major systems that are well known and widely practised, one based on x-ray fluorescence for elemental analysis and another based on x-ray diffraction (XRD) for structural and phase composition studies.

X-ray diffraction is the elastic scattering of x-ray photons by atoms in a periodic lattice. The scattered monochromatic x-rays that are in phase give constructive interference. Figure 1 illustrates how diffraction of x-rays by crystal planes allows one to derive lattice spacings by using the Bragg’s law.

where n is an integer called the order of reflection, λ is the wavelength of x-rays, d is the characteristic spacing between the crystal planes of a given specimen and θ is the angle between the incident beam and the normal to the reflecting lattice plane. By measuring the angles, θ, under which the constructively interfering x-rays leave the crystal, the interplanar spacings, d, of every single crystallographic phase can be determined.

In order to identify an unknown substance, the powder diffraction pattern is recorded with the help of a camera or a diffractometer and a list of d-values and the relative intensities of the diffraction lines is prepared. These data are compared with the standard line patterns available for various compounds in the Powder Diffraction File (PDF) database. This file is released and annually updated by the International Centre for Diffraction Data (ICDD). It contains line patterns of more than 60,000 different crystallographic phases. In practice, for any unknown sample, the appearance of three most intense characteristic lines from the standard PDF line pattern is a sufficiently convincing evidence of the existence of a crystalline phase in either a homogeneous substance or even in a multicomponent mixture. In some cases a distinction between two or more possible phases can be done by comparing the other characteristic lines. Furthermore, a prior knowledge of the class of materials under investigation and the chemical analysis data can be of great value.

From such qualitative determination of the mineral or phase composition, attempts are often made to evaluate the suitability of raw materials for clinkerization, the quality of clinker formation, the attainment of targeted cement formulation, the nature of hydration reactions, the impact of various admixtures on such reactions, the state of phase transformation of concrete in performance, and so on. The characteristic XRD lines for some of the common mineralsare furnished in Table 1 for ready reference.
It may be relevant to mention here that while the peak positions and intensities associated with an x-ray diffraction pattern enable qualitative analysis, as highlighted above, these parameters are also useful for lattice
constant determination and stress determination of the sample. The peak angles and profiles may further be used to determine particle size and degree of crystallization as well as in conducting precise x-ray structural analysis.
Crystal Size Effect. Clear diffraction peaks are only observed when the sample possesses adequate long range order. Diffraction lines from perfect crystals are very narrow. For crystallite sizes below 100 nm, line broadening occurs due to incomplete destructive interference in scattering directions where the x-rays are out of phase. The Scherrer equation relates crystal size to line width,

where <L> is a measure of the dimension of a particle in the direction perpendicular to the reflecting plane, λ is the x-ray wavelength, β is the peak width, θ is the angle between the beam and the normal on the reflection plane, and K is a constant which is often taken as unity. X-ray line broadening provides a quick, but not always reliable estimate of the particle size. It is desirable to understand the line profile analysis with Fourier transform method.