A construction joint, or day-work joint, is one where fresh concrete has to be placed on or against concrete that has already hardened. 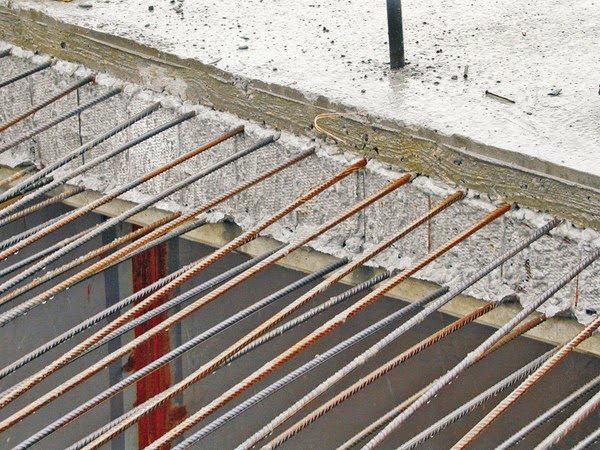 This type of joint is different from contraction and expansion joints, which are used to accommodate movement, and from joints incorporating water bars. Some construction joints do not need to be fully bonded, the reinforcement across the joint being adequate to transmit tensile or shear stresses across the slight gap that may occur due to contraction. But many construction joints may require the concrete to be bonded so that shear and tensile stresses are transmitted across the joint, in which case the risk of a shrinkage gap is to be avoided.

In both cases it needs to be recognized that joints always show, no matter how well they are made, so they should always be made to form a clean line on the surface. If appearance is important, such as with high-quality finishes, there are advantages in making a feature of the joints.

The position of construction joints should be settled before any concreting begins. As a general rule, joints in columns are made as near as possible to the underside of beams; joints in beams and slabs are normally made at the centre, or within the middle third, of the span.

The first requirement for a good bond is that the hardened concrete surface must be clean, free from laitance and have an exposed-aggregate appearance. After concrete has been vibrated, bleeding occurs by surplus water rising to the surface. The bleed water brings with it a small amount of cement and fines, and these are left on the surface after the water has evaporated. This layer of laitance is weak and, as well as being porous and not watertight, will not give a good bond for fresh concrete.
Similarly, concrete cast against vertical formwork also has a skin of cement paste on the surface, which, although not quite as weak as that at the top of a horizontal joint, is still likely to affect the bond when fresh concrete is placed against it. Laitance from both horizontal and vertical surfaces must be removed if and when a good bond or water tightness is required of the concrete itself. However, if watertightness is to be achieved by the incorporation of a water bar, removal of the laitance may not be necessary.

There are a number of ways of removing laitance from the top of cast concrete to provide a surface with an exposed-aggregate appearance:
A method used occasionally is to spray a retarder onto the surface of the concrete to 'kill' the set, so that the laitance can be brushed off the following day or later. This method is not recommended because it is difficult to be sure that all the retarded concrete has been removed - if not, fresh concrete cast against it will have a poor bond. The bond with reinforcement may also be affected.

Vertical construction joints in walls, beams and slabs will usually have been formed against a stop-end. Stop-ends should be located where the reinforcement is least dense; they should be well made, easily strikable, and fixed to avoid grout loss. A typical stop-end detail is shown in Figure 2.

Most vertical construction joints do not require any surface treatment, plain smooth surfaces being quite satisfactory. Only when a joint is subject to high shear forces (and the engineer must decide this) or when a monolithic watertight joint is required will the surface need preparation. Suitable methods are as follows:
When horizontal or vertical joints are featured or a good clean line is required, care must be taken, especially when tooling, to avoid chipping or breaking the arrises along the joint line. It is a good idea to leave untreated a margin of about 25 - 40 mm.


It is essential for the fresh concrete to be placed and compacted s that it bonds with the prepared surface. Poorly compacted concrete or honeycombed concrete at the bottom of a lift in a wall or column leaves a joint which is both weak and unsightly. First, any dirt, dust or rubbish (e.g. sawdust, pieces of wood, nails and bits of tie wire) must be removed from the surface of the concrete. This can best be done by blowing out all the dirt and rubbish with a compressed air hose. If compressed air is not available, then thorough brushing out is necessary. This cleaning out should be done before the formwork is erected, but if there is still some debris left after erection it should be removed by taking out one of the stop-ends.
On prepared concrete surfaces the use of mortars or grouts or wetting the face of a joint is not recommended for the following reasons:
Succesful construction joints are achieved simply by careful placing and thorough compaction of concrete against a properly prepared surface.

The first layer of concrete must not be deficient in fine material. If there is any danger of losing mortar from the concrete by leakage while transporting or placing it, the first batch should ideally be made richer than subsequent batches by reducing the coarse aggregate content. With ready-mixed concrete there may be a tendency for the beginning of the discharge to be rather coarse, in which case the first barrow-full may be discarded.
The first layer should be spread uniformly over the surface to a thickness of only about 300 mm. For small columns it will probably be necessary to use shovels to avoid putting in too thick a layer. Discharging a 0.5 cubic meter(cum) skip into a 600 mm square column, for example, will result in honeycombing at the bottom. When casting columns and walls the poker should always be put in before the concrete goes in, and be drawn up slowly as the concrete is progressively placed; this avoids compacting the surface layer, which would make it very difficult for the air trapped lower down to be expelled upwards subsequently. If using a skip for walls it should be moved along the top. Baffle boards are useful to make sure the concrete is discharged cleanly to the bottom of the forms. The first layer of concrete must be thoroughly compacted by poker vibrators inserted at close centres, depending on the size of the poker and the consistence class of the concrete. Lighting may be necessary for seeing the concrete at the bottom of the pour to check that it has been properly placed and compacted.

It is usually undesirable to make concrete flow horizontally using vibration, but at vertical joints some flow of the concrete towards the joints helps to avoid possible lack of compaction. As the layers of concrete are placed in a wall they should be kept back about 150 - 300 mm from the vertical joint and the poker used to make the concrete flow towards the joint; this needs particular care and a welldesigned concrete if segregation is to be avoided.