Specifiers often require concrete floors to be placed directly on a vapor retarder to reduce inflow of moisture
from the sub-grade soil and provide long-term protection for moisture-sensitive floor coverings. Water-vapor emissions as high as 100 pounds/1,000 square feet/24 hours have been measured over soils (Ref. 1).

Covering the subgrade with a vapor retarder can help reduce emission rates from concrete-floor surfaces to the 3 or 5 lbs/1,000 sf/24 hrs typically required by floor-covering installers. But what happens if the vapor retarder is punctured or installed incorrectly? Calcium chloride cup tests on vapor retarders were performed with and without holes.


We performed the calcium-chloride cup tests over intact and punctured vapor retarders placed over a sand subbase at two moisture contents. We also varied vapor-retarder thickness and the size of the punctures. Technicians placed ASTM C 33 concrete sand in twelve 16-inch-diameter, 33⁄4-inch-deep metal pans. To simulate saturated sand, they poured water into eight of the pans until the water level was visible just below the top of the pan. They weighed the sand in the other four pans and added 8% water by weight to simulate a typical optimum moisture content for a granular subbase.
The technicians covered four of the saturated-sand samples with 8 mil thick polyethylene sheeting and the other four with 40-mil-thick polyethylene, using duct tape to secure the overhanging sides to the pan and prevent moisture loss. They used a similar procedure to cover the four pans containing lower-moisture- content sand with an 8-mil thick polyethylene sheet. Figure 1 shows the test setup, and Table 1 shows the test condition of the vapor retarder. In each of the three sets of four pans, one vapor retarder was intact, one had a 1⁄8-inchdiameter nail hole, one had a 5⁄8- inch-diameter stake hole and one had an opening cut to the size of the lid for the calcium-chloride test kit.
Technicians measured water-vapor emission rates for all 12 specimens, using calcium-chloride cup test kits that were left in place three days. After the first test, the filled pans were stored in the laboratory for about 10 weeks and then retested for vapor emissions. For the retest, no additional water was added to the sand. 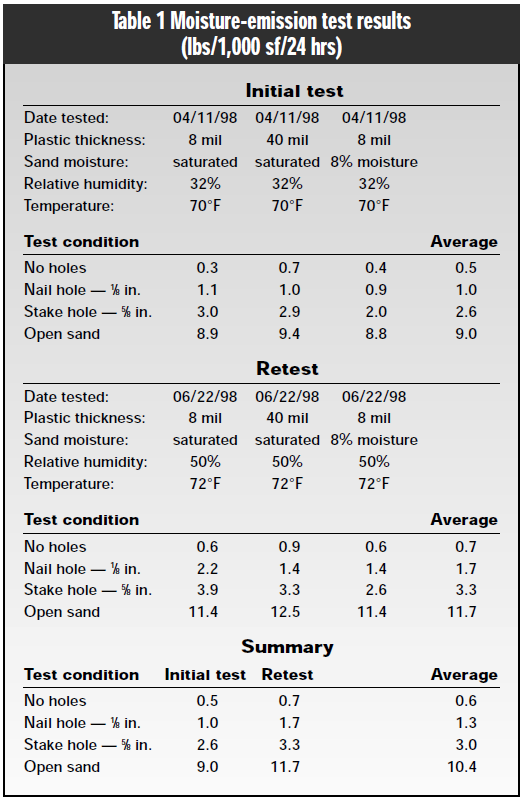 Table 1 also shows the watervapor emission rates for each initial test and retest. The emission rate through the vapor retarders with no holes averaged 0.6 lb/1,000 sf/24 hrs, and the results appear to indicate a higher emission rate through the thicker vapor retarder. However, we have conducted many calcium chloride cup tests, and our experience doesn’t support a conclusion that reducing the vapor-retarder thickness reduces vapor-emission rate. We believe the measured differences in emission rates over the intact vapor retarders more likely reflect a high test-precision error relative to the low emission rates that were measured.
A 1⁄8-inch-diameter nail hole allowed an average emission rate of 1.3 lbs/1,000 sf/24 hrs, and a 5⁄8-inchdiameter stake hole increased the average emission rate to 3 lbs/1,000 sf/24 hrs. Stake holes of this size could conceivably cause localized floor-covering failures or delay floor-covering installation, since a 3-pound rate is often the maximum allowed for installation of moisture sensitive floor coverings.
The measured water-vapor emission rate through the lid-sized opening was about the same regardless of the moisture content, and the rate didn’t decrease after more than two months of drying. In the field this means that when concrete is placed on a granular layer that is above a vapor retarder, any trapped moisture whether from rain, workers sprinkling the layer or compaction will provide a significant amount of moisture to the concrete slab.
After the retests were completed, we measured the moisture content of the sand in the three pans with lid-sized openings in the polyethylene. The moisture contents of the saturated sand were 18.8% and 15.6% for the 8-mil and 40-mil polyethylene, respectively, while the moisture content of the 8% sand had dropped to 2.5%. Surprisingly, even the granular base with 2.5% moisture content emitted water vapor at about the same rate as the wetter subbases. However, the measured values were much lower than the maximum soil emission values cited in Reference 1.

Comparison with Other Vapor-Retarder Test Results

Our results showing the effects of intact vapor retarders are similar to those from earlier tests by Brewer (Ref. 3). He measured moisture inflow from the subbase into 4-inchthick concrete specimens with a water-cement ratio of 0.70 and placed directly on:
He used two different vapor retarders: 4-mil polyethylene and 55- pound roofing felt. For details of his tests, see the article “Moisture Movement Through Concrete Slabs,” Concrete Construction, November 1997, pp. 879-885. Brewer started measuring moisture inflow about a month after the concrete had been placed.

Because punctures or other openings in a vapor retarder can significantly increase water-vapor emissions through concrete floor slabs, specifiers should consider protective measures during the design process. Some specifiers prefer a thick vapor retarder that will be more puncture-resistant during typical construction activities. Others require placement of a granular layer over the vapor retarder, specifying the use of a rounded gravel because angular crushed particles are more likely to puncture the vapor retarder.
More cautious specifiers may require both a thicker vapor retarder and the placement of a rounded, granular layer over it. Whenever granular materials are placed over a vapor retarder, specifiers should be aware that a prolonged drying period may be needed if the granular materials get wet during building construction. Contractors, too, must avoid damaging the vapor retarder. Some form manufacturers make supports for slab edge forms (Fig. 2) that don’t require puncturing the vapor retarder with stakes. Many contractors use job-built edge-form supports with wide bearing pads to avoid puncturing the plastic with edge-form stakes.
Finally, contractors must install the vapor retarder correctly by following manufacturers’ instructions that usually require:
Sources of Vapor-Retarder Leaks
Through punctures caused by:
Through openings at:
References