Basic Concepts of Moment of Intertia (Rotational Analog of Mass)

Moment of inertia, also called mass moment of inertia or the angular mass, (SI units kg sq.m) is a measure of an object’s resistance to changes in its rotation rate. It is the rotational analog of mass. That is, it is the inertia of a rigid rotating body with respect to its rotation. The moment of inertia plays much the same role in rotational dynamics as mass does in basic dynamics, determining the relationship between angular momentum and angular velocity, torque and angular acceleration, and several other quantities. While a simple scalar treatment of the moment of inertia suffices for many situations, a more advanced tensor treatment allows the analysis of such complicated systems as spinning tops and gyroscope motion.

The symbol I and sometimes J are usually used to refer to the moment of inertia.

The moment of inertia of an object about a given axis describes how difficult it is to change its angular motion about that axis. For example, consider two discs (A and B) of the same mass. Disc A has a larger radius than disc B. Assuming that there is uniform thickness and mass distribution, it requires more effort to accelerate disc A (change its angular velocity) because its mass is distributed further from its axis of rotation: mass that is further out from that axis must, for a given angular velocity, move more quickly than mass closer in. In this case, disc A has a larger moment of inertia than disc B.

The moment of inertia has two forms, a scalar form I (used when the axis of rotation is known) and a more general tensor form that does not require knowing the axis of rotation. The scalar moment of inertia I (often called simply the "moment of inertia") allows a succinct analysis of many simple problems in rotational dynamics, such as objects rolling down inclines and the behavior of pulleys. For instance, while a block of any shape will slide down a frictionless decline at the same rate, rolling objects may descend at different rates, depending on their moments of inertia. A hoop will descend more slowly than a solid disk of equal mass and radius because more of its mass is located far from the axis of rotation, and thus needs to move faster if the hoop rolls at the same angular velocity. However, for (more complicated) problems in which the axis of rotation can change, the scalar treatment is inadequate, and the tensor treatment must be used (although shortcuts are possible in special situations). Examples requiring such a treatment include gyroscopes, tops, and even satellites, all objects whose alignment can change.

A simple definition of the moment of inertia of any object, be it a point mass or a 3D-structure, is given by:

where
‘dm’ is the mass of an infinitesimally small part of the body and r is the (perpendicular) distance of the point mass to the axis of rotation.

For a solid body described by a continuous mass density function ?(r), the moment of inertia about a known axis can be calculated by integrating the square of the distance (weighted by the mass density) from a point in the body to the rotation axis:

where
V is the volume occupied by the object.
ρ is the spatial density function of the object, and

are coordinates of a point inside the body.

This theorem is also known as the parallel axes rule and is a special case of Steiner’s parallel-axis theorem. 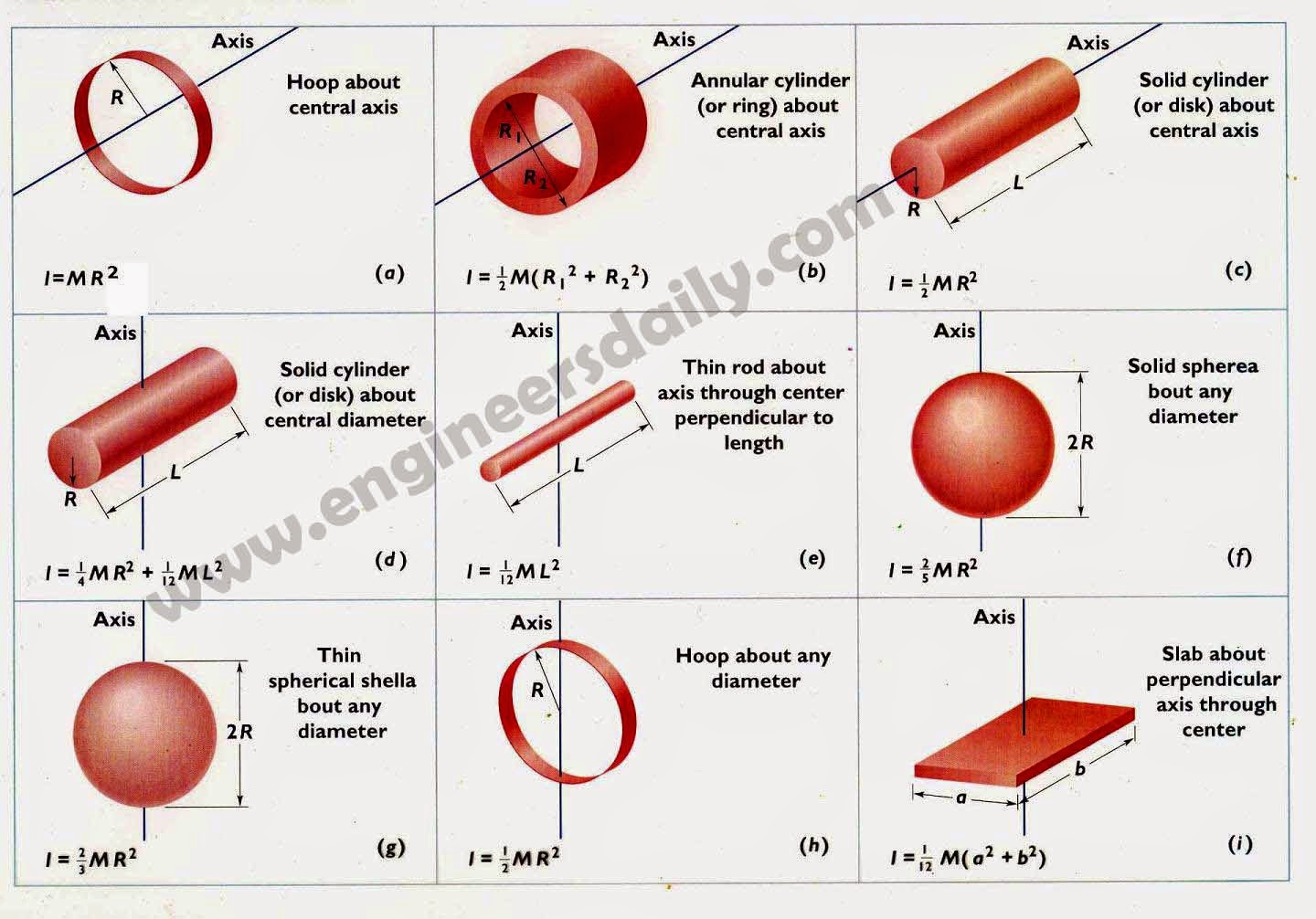