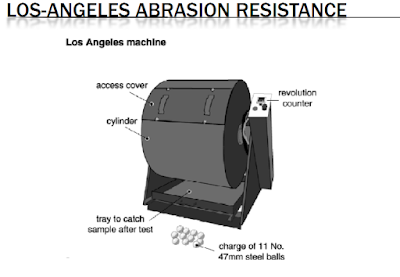 Abrasion is known as process of scraping or wearing something away, technically speaking; abrasion in geology is the mechanical scraping of a rock surface by friction between rocks and moving particles during their transport by wind, waves, gravity, running water or erosion. The intensity of this erosion effect depends on the hardness, concentration, velocity and mass of the moving particles.

What is abrasion, wear and tear?

Pavements in transportation engineering, either rigid or flexible have aggregates of specific sizes. These aggregates throughout their life are subjected abrasive effect of moving traffic vehicles. Whether it is sub-base, base or wearing course the aggregates are subjected to wear and tear. Aggregates transfer their loads from vehicles to ground through the interlock and toughness of their rigid surface.
The aggregates, thus, must be hard enough to resist crushing, degradation and disintegration from any associated activities. While fine aggregates are used among the coarser aggregates the load transferring mechanism is bit easy due to the cushioning effect of the fine aggregates, in case of gap or open graded Hot mix asphalt (HMA), where there are no such fines or some are missing, toughness of aggregates play a pivotal role in defining the life of a pavement.

Absence of abrasion resistance, hardness or toughness in aggregates would result in premature degradation, dust pollution early loss of skid resistance and many other problems as well.
Extent of Resistance to abrasion is measured in laboratory by a test called “Los Angeles Abrasion test” or L.A Test. Los Angeles abrasion test is an empirical test; meaning that it doesn’t have a numerical or analytical concept as its base. Though it relates and defines well with the toughness of the aggregates but generally do not show a good relationship with the field performance of the subject sample.

Theory of Los Angeles abrasion test is to produce the abrasive action by use of standard steel balls which when mixed with aggregates and rotated in a drum for specific number of revolutions also causes impact on aggregates. The percentage wear of aggregates due to rubbing with steel balls is determined and is known as Los Angeles Abrasion value

Based on grading of aggregates select the number of steel balls and respective sieve sizes are arranged and total of 5000g sample is prepared. The sample is placed in a steel rotating drum along with the steel spheres or “charge”. As the drum rotates the drum picks up the aggregates and steel spheres and then drops them on the opposite end. This rotating, crushing and impact generates the abrasive effect. After specific number of revolutions, aggregates are removed from the drum and sieved on No. 12 (1.70 mm) sieve. The aggregate that is retained on the sieve is weighed and the difference between the weight is reported as percentage and given as Los Angeles Abrasion value.

1) The sample obtained is cleaned and dried in oven at 105 to 110 degree Celsius.
2) Select the grading of the aggregates such that it suits best with the grading to be used in construction as shown in the table;
3) Arrange the sieves as per grading and weight the material retained on specific sieves such that the total weight becomes 5000 g.
4) Select the charge or steel balls for the Los Angeles Abrasion test as per the grading.
5) Place the aggregates and the charge in to the steel drum.
6) Rotate the Los Angeles Abrasion testing machine at a speed of 30 to 33 revolutions per minute (rpm). The revolutions is also dependent on the grading of the aggregates, it is 500 for grading A, B, C and D while 1000 for E, F and g.
7) The machine after specific revolutions is stopped and material is discharged to a tray.
8) The material is then sieved from Sieve No. 12 or 1.70 mm.
9) The material that would retained on sieve No. 12 is weighed and noted.