Most Beautiful Cars: The Citroen DS

It is not sufficient to see and to know the beauty of a work. We must feel and be affected by it. – Voltaire


It is said that beauty is in the eye of the beholder. Lately, I’ve been reading some lists of “Beautiful Cars” that force me to believe the beholder was blind. One website, Edmunds lists the 1973 Pontiac Grand Am and the 1985 Chevrolet Camaro in the 100 Most Beautiful Cars of All Time. Voting in those plastic nightmares tells me they have no clue about design or beauty, and just had too many cars in the list. It is just silly. So, I have decided to take a stab at my own list, and showcase what I feel are the “Most Beautiful Cars Ever Made.” Each post will highlight one car, in no particular order. 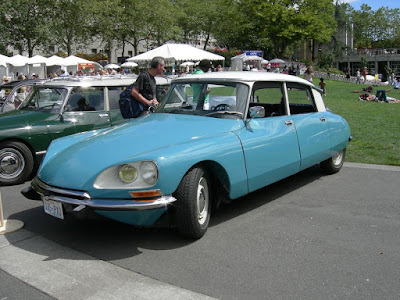 First in my list is the incomparable Citroen DS, a car that took the world by storm in 1955. In a time where France was still rebuilding from the disaster of WWII, and a time of sever austerity in Europe, this space ship was a complete shock to the automotive world. Built in secret over a period of 18 years as a replacement to the Citroen Traction Avant, the new DS was so amazing a design that it sold 743 copies in the first 15 minutes of its debut. Imagine the frenzy. By the end of the day a record breaking 12,000 examples were sold.

The DS, pronounced “Déesse,” French for Goddess, was styled by Italian sculptor and industrial designer Flaminio Bertoni and the French aeronautical engineer André Lefèbvre. Its futuristic aerodynamic body design and innovative technology was so shocking and revolutionary to the public, that some were even scared of the car. Contemplate this for a moment. The year was 1955, and most of the cars were pre-war designs, with upright radiator shells, pontoon fenders, crank starters, hardwood dashboards, and in America: tail fins. Along came the DS with a shape that was aerodynamic, beautiful, and appeared to float over through the streets like a time traveler from another dimension. This was a car whose scarab, teardrop shape was like nothing else on the roads. The bright colors, and open airy interior was so different from the dark, heavy, industrial cars of the day that it changed the definition of what a motorcar could be.

The DS was literally a space ship for the masses. Not only did it change the way cars were perceived; it changed the way cars were built. The technology included a hydro pneumatic self-leveling suspension, front power disc brakes, variable ground clearance, and a semi-automatic transmission with no clutch pedal. The hydraulic assisted brakes were operated not by a pedal, but by a small mushroom shaped button, with which the slightest of pressure could bring the massive car to a very abrupt halt.

The list of innovations continues with a fiberglass roof, inboard front brakes along with independent suspension, different front and rear track widths to reduce the under steer typical of front engine, front wheel drive cars. The DS has an engine designed to slide under the floor in a crash, headlights that swivel when you steer, space frame construction, tolerances within microns, the first plastic dashboard, use of aluminum in the bonnet and fenders, crumple zones, rollover protection, and a even a collapsible steering wheel.

The DS used a suspension system of compressed nitrogen gas, was auto self leveling, and even had a self centering one spoke steering wheel.  The engine was a hemispherical head engine, though with only about 100hp due to French Tax Horsepower system.  It was a car that could drive on three wheels, climb a wall of ice, start in 40 below weather, and provide the best “magic carpet” ride quality ever built into a car.  The suspension and quality of ride made the DS unique in the automotive world.  The driver could travel from asphalt to gravel to snow, and only identify the changes by the different color of the surface.  Nothing was allowed to disrupt the perfection of the ride comfort.

The DS was also utterly French, and a symbol of French ingenuity and design.  It was beautifully sculpted with an aerodynamic body that still looks fresh in 2012.   The car is sheik and stylish, yet strangely conservative, wildly eccentric yet also very practical.  It is quirky and beautiful in every way.  The complete devotion to aerodynamics is evident in the teardrop shape.  The wheelbase was extended on the design mock up to make the car more appealing to the eye.  In fact, it exactly matches the wheelbase of a Rolls-Royce Silver Cloud, a length of 10’ 3 inches.

To appreciate the aerodynamic shape of the DS, one only has to look at the Saab 96.  Both have the same teardrop shape, but the Saab is not executed in the same clean, sculptured lines.  The Citroen seems light and airy compared to the bulkiness of the Saab.  Even in the 1960’s with the Jaguar MkII Saloons, the effect of the wind cheating aerodynamic shape remained heavy and complicated.  In fact, the shape of the DS defines the car.  One important point that is often unnoticed deals with the front of the vehicle.  Most cars use the front face to identify and reinforce the brand.  Grilles, badges, hood ornament, and names are plastered all over.  The DS is blank and clean.  It survived in the market place purely by virtue of its shape.

The Citroen DS has been chosen as one of the most beautiful cars ever made by many critics, generally is recognized as one of the most influential of all auto designs, and was voted THE most beautiful car of all time by Classic & Sports Car magazine.  The DS was awarded “Product of the Century” ahead of the Boeing 747, lunar landing module, and even the Apple Macintosh computer.  For me, the scarab shaped car is still relevant almost 60 years since its introduction, and one of my top ten cars of all time.