Characteristics and Types of Cement 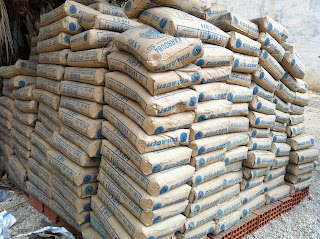 • It is a general-purpose cement used in concrete for making pavements, floors, reinforced concrete buildings, bridges, tanks, pipes, etc.
• It is used in concrete not subjected to aggressive exposures, such as sulfate attack from soil and water, or to an objectionable temperature rise

• It is used where precaution against moderate sulfate attack is important, as in drainage structures, which may be subjected to a moderate sulfate concentration from ground waters
•It usually generates less heat of hydration at a slower rate than Type I cement and therefore can be used in mass structures such as large piers, heavy abutments, and retaining walls
• Due to less heat generation it can be preferred in hot weather

• It is chemically and physically similar to Type I cement, except that its particles have been ground finer
• It provides high early strengths at an early period, usually a week or less
• It is used when forms need to be removed as soon as possible or when the structure must be put into service quickly
• It is preferred in cold weather for reduction in the curing period

• These cements have same composition as Types I, II, and III, respectively, except that small quantities of air-entraining material are inter-ground with the clinker during manufacture
• These cements produce concrete with improved resistance to freeze-thaw action and to scaling caused by chemicals applied for snow and ice removal.

• It has composition same as Type I or Type III cement, except that it has a white color instead of gray color
• It is made of selected raw materials containing negligible amounts of iron and magnesium oxides-the substances that give cement its gray colors
• It is used primarily for architectural purposes

• These cements are produced by intimately and uniformly blending the Portland cement and the by-product materials, such as blast-furnace slag, fly ash, silica fume and other pozzolanas


Special Cements (Not covered by ASTM)

1. C3S
• Hydrates and hardens rapidly and is largely responsible for initial set and early strength
• Early strength of cement is higher with increased percentages of C3S
2. C2S
• Hydrates and hardens slowly
• Contributes largely to strength increase at ages beyond one week
3. C3A
• Liberates a large amount of heat during the first few days of hydration and hardening
• Also contributes slightly to early strength development
• Gypsum added to the cement slows down the hydration rate of C3A
• Cements with low percentages of C3A are especially resistant to soils and waters containing sulfates
4. C4AF
• Does not play any significant role in hydration.