Designing and building formwork effectively requires a basic understanding of how concrete behaves as it exerts pressure on formwork. Concrete exerts lateral pressure on the formwork. The formwork is designed based on these lateral forces. 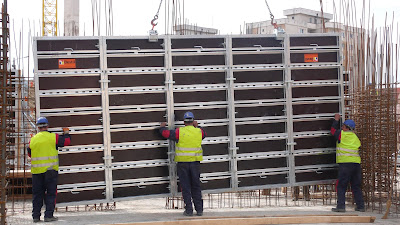 Lateral concrete pressure on formwork is affected by:

2) Concrete pour rate: Concrete pressure at any point on the form is directly proportional to the height of liquid concrete above it. If concrete begins to harden before the pour is complete, the full liquid head will not develop and the pressure against the forms will be less than if the pour were completed before any of concrete hardened.
Once concrete hardens it cannot exert more pressure on the forms even though liquid concrete continues to be placed above it. The following diagrams illustrates how form pressure varies when the pour rate is increased from one level to another level. For ease of explanation, it is assumed that concrete hardens in one hour (typically) at 21°C.

When the pour rate is increased the pressure also increases as shown below:


3) Weight of Concrete: Pressure exerted against the forms is directly proportional to the unit weight of concrete. Light weight concrete will exert less pressure than normal weight concrete as shown below:

4) Temperature: The time it takes concrete to harden is influenced greatly by its temperature. The higher the temperature of the concrete, the quicker it will harden. Most formwork designs are based on an assumed average air and concrete temperature of 21°C. At low air temperatures, the hardening of concrete is delayed and you need to decrease your pour rate or heat your concrete to keep the pressure against the formwork from increasing. Ideally, concrete should be poured at temperatures between 16°C and 38°C. Outside this temperature range there is often insufficient moisture available for curing. If adequate water for curing is not available or freezes, the strength of the concrete will suffer.

5) Type of Cement: The cement type will influence the rate at which concrete hardens. A high early strength concrete will harden faster than normal concrete and will allow a faster pour rate. When using a cement which alters the normal set and hardening time, be sure to adjust the pour rate accordingly.

7) Concrete Slump: When concrete has very low slump, it acts less like a liquid and will transmit less pressure. When using concrete with a slump greater than 100 mm, the formwork should be designed to resist full liquid head.