Sir Isaac Newton was born on Christmas Day of 1642 in the hamlet of Woolsthorpe, England, where his mother managed the farm left by her husband who died two months before Isaac was born. The baby was frail and sickly, but he somehow managed to survive and grow stronger, even though he never enjoyed excellent health. He was educated at a local school of low educational standards and as a youth showed no special flair except for an interest in mechanical devices. He was a curious boy and an average student in the grammar school at Grantham. 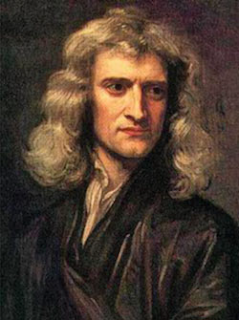 Newton did well enough in his subjects to be admitted to Trinity College of Cambridge in 1661. When Newton received his bachelor’s degree in April 1665, he had to leave Cambridge because the university was closed down, and plague was widespread in the London area. He returned to his home at Woolsthorpe, where he spent the next two years contemplating the ideas about space and time and motion he had first considered while at the university.

By the time of his return to Cambridge (in 1667), it is tolerably certain that he had already firmly laid the foundations of his work in the three great fields with which his name is forever associated: calculus, the nature of light, and universal gravitation and its consequences. Newton’s theory of gravitation was based on his theory that “the rate of fall was proportional to the strength of the gravitational force and that this force fell off according to the square of the distance from the center of earth.”

His observation of an apple falling from a tree to the ground while at Woolsthorpe led Newton to conclude that the earth was pulling on the apple and the apple on the earth. Newton was the first to speculate that the force that caused the apple to fall to the ground is the same force that keeps the moon in its orbit around the earth and the earth in its orbit around the sun. Newton not only unified and completed the mechanics of Galileo and Kepler, but he showed that the dynamic motions of the universe can be described by basic mathematical relationships that are valid anywhere in the universe. Newton’s achievements dominated science and philosophy for the next two centuries.
At first Newton did not publish his discoveries. He is described by most of his contemporaries, including Robert Hooke and Huygens, as having had an abnormal fear of criticism. Later, his astronomer friend Edmond Halley (1656–1742) recognized his greatness and encouraged him to publish his results. This caused Newton to begin working on a book explaining his theory of gravitation, as well as the three laws of motion. He finished the manuscript in 18 months, and it was published in 1687 at Halley’s expense as the Philosophiae Naturalis Principia Mathematica (The Mathematical Principles of Natural Philosophy). The book is usually referred to simply as the Principia.

Written in the form of a series of densely worked geometrical axioms and proofs, it remains the greatest and most influential scientific work ever written. It offered a vision of a universe wound up by a cosmic hand and left to run down on its own with all dynamic motions governed by the law of gravitation. The Principia brought Newton worldwide fame and ensured his unequalled reputation in the scientific community.
The Principia is divided into three books. In a prefatory section Newton defines  concepts of mechanics such as inertia, momentum, and force; he then states the three famous laws of motion, which are:

A body continues in its state of rest, or of uniform motion in a right line, unless it is compelled to change that state by forces impressed upon it.

Law II
The change (in the quantity) of motion is proportional to the motive power impressed and is made in the direction of the right line in which that force is impressed. In the definition of motion, Newton means the mass times the velocity. Hence the change in motion, if the mass is constant, is the change in velocity, i.e., the acceleration.
Law III
For every action, there is always an opposite and equal reaction, or the mutual actions of the two bodies upon each other are always equal and directed to contrary parts. Although his discoveries were among many made during the Scientific Revolution, Isaac Newton’s universal principles of gravity found no parallels in science at the time.

Newton’s legacy to modern science is rivaled only by the work of Albert Einstein, who in the twentieth century, would overturn Newton’s concept of the universe, stating that space, distance, and motion were not absolute but relative, and that the universe was more fantastic than Newton had ever conceived.

Did you enjoy this short article about this legend? Please take a second to share it.