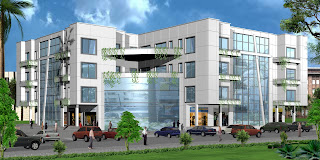 This proposal will focus on the conceptual design for the multistoried buildings in seismic areas so the selected structure efficiently withstands the seismic forces.Three steps are as follows,
1. Development of Basic Infrastructure Information
The information regarding to development is highly quantitative and is driven by organizational and functional goals of the project program .It also influences the elements of conceptual design for form and structure that in turn affect seismic response of buildings. Several areas of basic project information are as follows,
2. Application of general seismic design principles that shape preliminary massing
In designing buildings to respond efficiently to seismic forces, there are general principles that can be applied at the conceptual stage as building plan configuration and three-dimensional form are being shaped.

In the case of vertical forms such as towers, overturning forces are amplified over the height of buildings while forces are generally of greater magnitude in lower forms than in taller forms.In plan configuration, having a relatively larger base over which to spread the overturning moment is beneficial, particularly for taller buildings.

Regular shapes in plan and section
Simple, planar continuity versus offsets and irregular shapes.
Multiple bays in each direction for structural efficiency of multistory buildings
Multiple bays, particularly for braced frames and shear wall systems, are essential for structural efficiency in resisting seismic forces.
Avoiding discontinuities (particularly at the ground plane)
Seismic forces are most efficiently collected and rerouted to the ground when structural elements through which the forces are channeled align both horizontally and vertically. The risks associated with “soft stories” have been made absolutely clear in recent “quakes”.
3. Comparison of key attributes of alternative structural systems

Selecting the appropriate structural system(s) at the conceptual design stage informs the design process so that subsequent design decisions can be tailored to fit with the selected system(s).

Attributes to be considered include:

· Degree of confidence that building can remain operational after seismic events

· Flexibility for size, shape & locations of openings and for future changes to layout

· Relative level and “roughness” of anticipated acceleration on floors during quakes

· Relative anticipated displacement at floor levels during a major quake.

Here are different structural systems.
Base Isolation Systems cut off a substantial part of the energies at the source (the ground level) through the separation of aboveground floors from the ground except for lateral movements.
· Structural bearing points supported by force isolators (rubber bearing isolators or sliding metal also known as friction pendulum isolators).

· Possibly dampers to further absorb energy and reduce movement of the building.

Here are examples of the evolution of moment frame systems.

· Moment Frame with Passive Dampers(Dampers absorb energy and reduce likelihood of damage and cost of repair).

· Coupled-Girder Moment Frame with Passive Dampers(new system. Used in convention center in California. Further reduces movement, acceleration, likelihood of damage and cost of repair).
Braced Frame Systems are rigid systems that attract, resist and redirect forces at columns, beams and X or K braces on multiple bays of the structure. Braces limit size, shape and locations of openings in the bays in which they occur. In larger earthquakes, braces may be damaged (buckle) and require replacement. As with moment frame systems, improvements have been developed for braced frame systems to reduce the likelihood of damage and the cost of repair.Braced frames use trussing to resist sideways forces on buildings. Trussing, or triangulation, is formed by inserting diagonal structural members into rectangular areas of a structural frame. It helps stabilise the frame against sideways forces from earthquakes and strong winds.Braced frames have much higher initial strength and stiffness. Bracing is a much effective than rigid joints at resisting racking deformation of the frame.Braced frames use less material and have simpler connections than moment-resisting frames.Braced frames can lead to lower floor-to-floor heights, which can be an important economic factor in tall buildings, or in a region where there are height limits.Braces can be used as a strong visual element.
Shear-Wall Systems are rigid systems that attract and resist forces at structural walls infilling multiple bays of the structure. Shear walls, particularly when constructed of reinforced concrete, lend themselves more easily to forms that include curved walls. The walled areas limit the size and location of openings but allow flexibility in shapes of openings. Shear walls should be stacked so that forces can move vertically from upper floors to the ground without offsets.