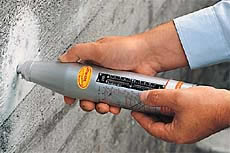 The difficulties of core cutting, making, curing and testing of standard test specimens can be avoided if concrete strength can be tested at the site in a manner harmless to the part of the concrete under test. One such method that has found practical application with a limited scope is known as the Rebound Hammer Test devised by Ernst Schmidt. It is also known as impact hammer or Sclerometer test.
Parts of the Schmidt Hammer
Parts of the hammer are shown in figure below. It weighs about 4 lbs and is suitable for use in laboratory and in the field. 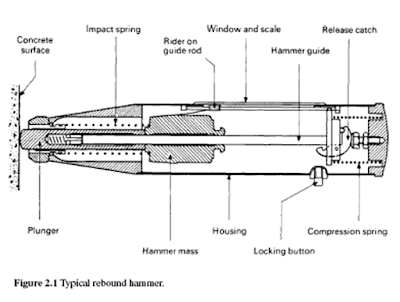 
This test is based on the principle that the rebound of an elastic mass depends on the hardness of the surface against which the mass impinges. In rebound hammer test, a spring loaded mass has a fixed amount of energy imparted to it by extending the spring to a fixed position. This is achieved by pressing the plunger against the surface of concrete under test. Upon release, the mass rebounds from the plunger, still in contact with concrete surface and the distance traveled by the mass expressed as the percentage of the initial extension of spring is called the rebound number. 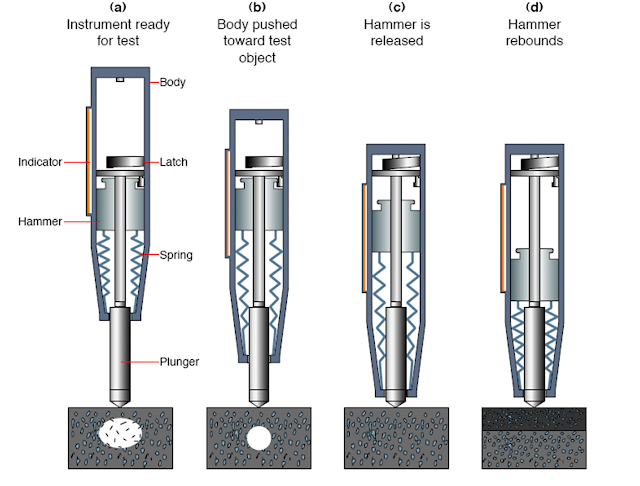 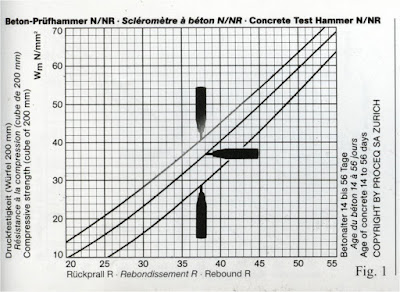 Limitations
● The hammer has to be used against a smooth surface preferably a formed one. Open textured concrete can not be tested.
● If the concrete to be tested doesn’t form a part of a larger mass, it has to be supported in an unyielding manner. Jerking will result in lower rebound number.

● Test is sensitive to local variation in concrete. For example, presence of a large piece of aggregate immediately under a plunger would result in abnormally high rebound number and presence of a void would lead to a very low value. The average of 10-12 readings is taken to account for test variations.

● Lower readings are generally obtained if plunger is with in 2” of the edge of concrete.

● The plunger must always be normal to the surface of concrete under test but the position of the hammer relative to the vertical will affect the rebounded number. This is due to action of gravity on the travel of the mass of the hammer. Rebound number of floor would be smaller than that of the soffit for concrete of same mix proportions / strength. Actual variation is determined experimentally.


● The test determines the hardness of the concrete surface and there is no unique relation between hardness and strength of concrete. Changes in the surface of concrete like degree of saturation or carbonation could be misleading. See figure below.

● The type of the aggregate used effects the rebound number so relation between rebound number and strength should be determined from experiments for every concrete used on site.

Figure below shows this relation. 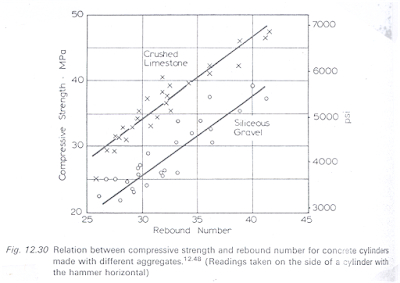 ● The test is of comparative nature only and the claim of the manufacture, that the rebound number can be directly converted into compressive strength is not justified.

● The test can be used to determine the uniformity of concrete and can be of great value in checking the quality of material through out the structure. 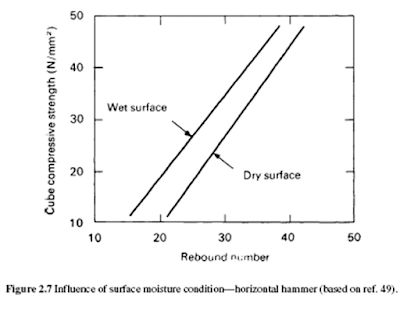 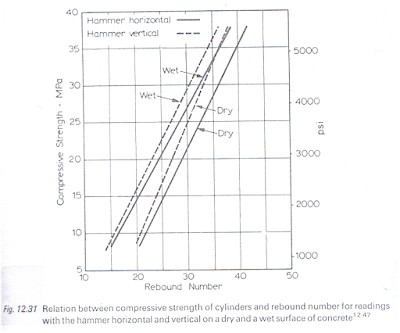 Uses
It is used to:

● Determine the uniformity of concrete in a structure.

● Determine the time for removal of formwork.

● Check whether strength development of a given concrete has been affected by frost at early ages.