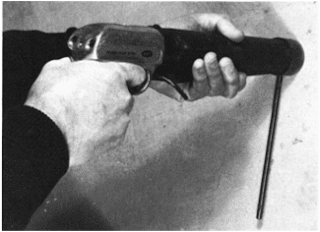 It is commercially known as Windsor probe test. It estimates the strength of concrete from the depth of penetration of a metal rod driven by a sudden charge of powder .(Explosive) 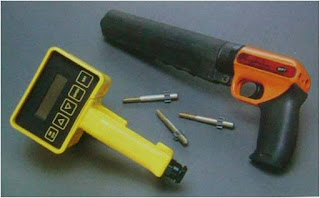 •The Windsor HP Probe system rapidly and accurately determines the concrete compressive strength of a structure by driving a probe into the concrete with a known amount of force.

•This modern system is capable of measuring concrete with a maximum compressive strength of 110MPa.
Description of Equipment

The Windsor probe equipment consist of cartridge, depth gauge for measuring penetration of probes and other related equipment. The probe has a diameter of 0.25” and length 3.125”. The probe is driven into concrete by firing a powder charge that develops energy of 575 lbs ft.
Test Procedure 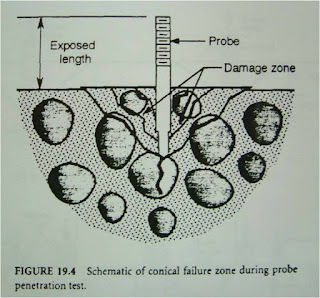 ● The Windsor probes are driven by a power actuated driver in a set of three, in close vicinity and average value is used for estimation of strength of concrete.

● The measurement on which the test in based is the length of probes projecting out from the surface of concrete. The exposed length of probe may be measured by using a calibrated depth gauge. In addition, a locating template, which is 7” equilateral triangle, is also used to position three probes, one in each corner. 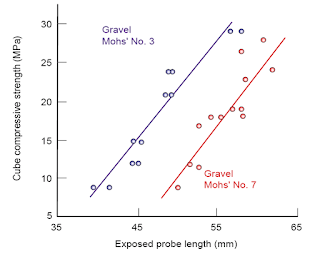 ● The test measures the hardness and does not yield absolute value of strength and is useful in determining the relative strength.

● It is superior to rebound hammer test because measurement is made not just at the surface of concrete but in depth. Probe actually fractures the aggregate and compress the material into which it is driven.

● Both Windsor probes and Schmidt hammer test are basically hardness test but former is costlier than the later.