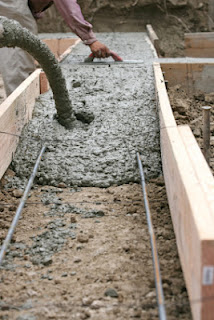 Concrete placing operations often are planned to allow for the free fall of concrete. This planning also must consider any segregation that might occur when the concrete free falls into place. Techniques such as placing concrete into drop chutes or through windows in wall forms can minimize the effects of concrete free fall. However, using these measures unnecessarily can increase concreting costs without benefiting the in-place quality of the concrete.

Sometimes specifiers and inspectors dictate the maximum free-fall distance of concrete because they believe limiting free fall is necessary to minimize concrete segregation. Usually they limit the free-fall distance to 3 to 5 ft (0.9 to 1.5 m), but occasionally the limit is as little as 2 ft (0.6 m). Neither ACI 301-99, “Specifications for Structural Concrete,” nor ACI 318-99 “Building Code Requirements for Structural Concrete,” limits the maximum distance concrete can free fall. ACI 304-99, “Guide for Measuring, Mixing, Transporting, and Placing Concrete,” states that if forms are sufficiently open and clear so that concrete is not disturbed in a vertical fall into place, direct discharge without the use of hoppers, trunks, or chutes is usually desirable.ACI 301, 318, and 304, however, all require placing concrete in its final position to avoid segregation.


Does free fall cause segregation?

At least four field studies have shown that free fall from great distances doesn’t reduce concrete quality. Although all the field studies have been for caissons, the results should also apply to other structural elements such as walls, columns, and mat foundations. In the Chicago area, contractors routinely construct concrete caissons by allowing the concrete to free fall to depths of up to 150 ft (46 m). Full length cores taken from more than 100 of these caissons over a 30-year period have shown no evidence of segregation or weakened concrete. In 1999, the Federal Highway Administration eliminated its 25 ft (8 m) free-fall limitation and now allows unlimited free fall of concrete.

In a 1960 investigation, concrete was dropped into a 3 ft (0.9 m) diameter, 80 ft (24 m) deep caisson without striking the sides.After 2 weeks, cores were removed and visually examined. A 50 ft (15 m) deep observation excavation was made along the caisson, and the strength of the concrete was tested with a rebound hammer. The investigators found no concrete segregation or reduction in compressive strength.

Turner describes field tests conducted in 1979 in which concrete was dropped vertically 50 ft (15 m) into caissons of various diameters. Technicians removed samples of fresh concrete from three caissons ranging in diameter from 3 to 8 ft (0.9 to 2.4 m). The unconfined, free-fall concrete samples were analyzed for changes in aggregate grading. The analysis showed that the grading of aggregate in the concrete that had been dropped was essentially the same as that in the concrete sampled directly from the truck mixer. Turner detected no segregation of the concrete.

In 1992, the Alabama Highway Department conducted a field test to determine if the concrete placement method had an effect on aggregate segregation, and to assess the compressive strengths of concrete delivered at freefall heights of 5 ft (1.5 m), 25 ft (7.6 m), and more than 50 ft (15 m).They allowed concrete to fall freely into the center of a 7 ft (2.1 m) diameter, heavily reinforced shaft up to 75 ft (23 m) deep. After visually examining a full-length core from the center of the shaft, investigators removed 18 samples for compressive strength testing. Visual inspection of the core samples revealed no evidence of aggregate segregation. The core test results indicated that compressive strength was highest for concrete that was dropped the farthest. In order of free fall for 5, 25, and more than 50 ft, the average compressive strengths were 5150, 5750, and
7880 psi (35.5, 39.6, and 54.3 MPa), respectively. The 28-day design compressive strength was 4000 psi (28 MPa).

In 1994, STS Consultants conducted an extensive study of the effects of free fall on concrete.They placed concrete in four 60 ft (18 m) long, 3 ft (0.9 m) diameter drilled shafts. To assess concrete quality, they took standard 6 x 12 in. (150 x 300 mm) cylinders for each lift placed and compared them in lab tests to 4 in. (100 mm) diameter cores taken after the concrete was adequately cured. None of the lifts placed exhibited any signs of segregation. The design strengths of concrete dropped directly into the center of the caissons ranged from 13% lower to 20% higher than the reference cylinder strengths. The measured core strengths varied from 5510 to 7060 psi (35.5 to 48.7 MPa), all well above the 4000 psi (28 MPa) design strength.

Researchers made several other interesting observations during this study:

The placing chute was positioned so that concrete would directly strike the rebar. The investigators noted that this placement technique resulted in a considerable amount of ricocheting of aggregate, movement of the rebar cage, and complete coating of the rebar with cement paste. In seven out of eight comparisons, the core strengths of concrete hitting the rebar were higher than those of concrete not striking the rebar. No segregation of the concrete was observed. The  investigators noted that “the general expectation that striking of the rebar cage will cause segregation or weakened concrete is invalid.”

Concrete mixtures with slumps of 4 to 5 in. (100 to 125 mm) and 7 to 8 in. (175 to 200 mm) were used. A high-range water reducer (superplasticizer) was added to the high-slump mixtures. The investigators found no segregation or strength differences between the low- and highslump
concrete mixtures.

What field studies and practice indicate?

Free fall of concrete from heights of up to 150 ft (46 m), directly over rebar or at high slumps, does not cause segregation, or reduce compressive strength. Restricting free-fall heights does decrease concrete production rates, increasing owners’ costs without increasing concrete quality.