End of 20th century has marked the use of modern concrete as inevitable in future applications. Number of countries has already shifted to this novel technology and Pakistan being a developing country is no exception to it. Modern concrete is steadily replacing conventional concrete. The construction industry of Pakistan is already geared towards the use of modern concrete in number of projects and modern concrete has started finding its application in almost all major civil engineering projects in Pakistan.
Recent International conferences on modern concrete organized in Pakistan recognized infrastructural growth in the region. Through these conferences it was obvious that tremendous research and practical information as well as new technologies are now spreading rapidly within Pakistan. An International Conference held in 2010 on modern concrete functioned as the platform for the research exchange. 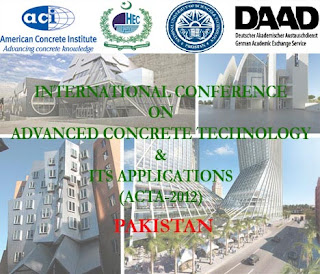 With a view to promote awareness, transfer technology and to be benefited from work of reputed foreign researchers, an International conference on “Advanced Concrete Technology & its Applications (ACTA-2012)” was organized by NUST Institute of Civil Engineering (NICE), National University of Sciences & Technology (NUST), Islamabad(Pakistan) on 6th & 7th Nov,2012. Experts from all over the globe were invited for participation in this premier institution of Pakistan for the purpose. The aim of this conference was to enhance awareness on the use on modern concrete and to promote collaboration between industry, academia and practitioners.The event was organized by NUST in collaboration with Higher Education Commission of Pakistan(HEC),German Academic Exchange Service(DAAD) and American Concrete Institute(ACI).
The two day conference was an eye opener for civil engineering professionals and students. It was divided into 6 technical sessions namely special topics and new trends, role of SRMs & microstructure studies, study of performance & durability, study of performance including fire safety and serviceability, design & analyses and concrete properties. 1st day sessions focused on concrete materials and those of 2nd day revolved around performance, design and analysis of concrete and concrete structures. A lot of new trends, challenges and issues pertaining to manufacture and use of modern concrete were thoroughly discussed in the above mentioned technical sessions.

Prof. Dr.-Ing*.Thomas A. Bier, Technical University, Freiberg, Germany and Prof. Dr.-Ing*.Syed Ali Rizwan of NUST were focal personnel of the conference. After the keynote address by Prof. Dr.-Ing*.Bier, he discussed the CO2 footprint of concrete with a view to reduce the emission of CO2 in manufacture of cement. Type I to Type V cements (CEMI-CEMV) were compared with regard to strength, market share and CO2 footprint. Importance of CEMII cements was also highlighted as most new cements made by replacement of clinker by latent hydraulic, pozzolanic or even inert, finely ground additives are mostly sold under CEMII class. It was emphasized that at present portland cement stays as the privileged binder material for construction. The “reactivity” of secondary cementitious materials (SCMs) such as slag, fly ash or rice husk ash are most important to create composite cements for a sustainable construction. Therefore all efforts made to dilute the OPC clinker in cement compositions are at the moment the most effective way to contribute to sustainability in the sense that the CO2 emissions shall be reduced.

Effects of addition of several materials like marble powder, bagasse ash, silica fume, blast furnace slag, polypropylene fibers, carbon fibers and rubber aggregate were also presented. X-ray diffraction (XRD) results also grabbed the interest of audience. XRD technique was used to show the microstructure of cement and concrete pastes with a view to analyze the reaction mechanism and kinetics. It also revealed the effect of above mentioned secondary raw materials (SRMs) and other materials on microstructure of concrete.

Dr.Shuaib Ahmad of NED Karachi presented an overview of the effects of polypropylene fibers (PPF) on various properties of concrete in fresh (plastic) state such as workability and in hardened state such as compressive strength, tensile strength, flexural strength, bond strength, fracture properties, creep strain, impact and chloride penetration with focus on work accomplished in the last decade (2000 -2011). Some applications of PPF reinforced cementitious composites for highway/airfield pavements and bridge decks were also demonstrated. 0.1 % - 2% addition of polypropylene fibers to concrete does not affect the strength of concrete. It was established that polypropylene fibers reduce the cracks in bridge decks and pavements.

Prof. Dr.-Ing* Syed Ali Rizwan of NUST presented his point of view on self compacting concrete (SCC) and self consolidating mortar system. He has done extensive research on the topic and enlightened the audience with his valuable findings. In addition, he also threw some light on silica fume and time skeleton formation time (time zero) of concrete. He demonstrated with shrinkage and calorimetric measurements that the anti-bleed properties of high performance concrete(HPC) and SCC seem to be due to the presence of carbon particles, excessive water consumption/uptake in the advancement of pozzolanic reaction, adsorption of water at silica fume particles, fineness of particles and to the presence of space within agglomerated silica fume particle groups.

Dr.Torsten Westphal of Germany elaborated the in situ X-ray diffraction studies for hydration process of concrete and characterization of fly ash. Fly ash is a group of materials with very variable properties. 149 fly ashes were studied by X-ray fluorescence (XRF) for chemical and by X-ray diffraction (XRD) for mineral composition. 26 mineral phases were identified and 15 were considered as relevant for quantitative analysis. Data from chemical and mineral analyses were combined to obtain a deeper insight in the potential behavior of fly ashes as secondary cementitious material(SCM). Concrete microstructure revealed that the addition of super plasticiser and limestone powder clearly change the phase formation processes. Super plasticiser was found to decelerate gypsum and ettringite formation. Limestone powder leads to an accelerated formation of hydration products.

Dr.Muhammad K.Rahman of King Fahad University of Petroleum & Minerals, KSA shed light on many topics including formwork pressure due to self compacting concrete and its comparison with normal concrete, finite element modelling of exterior beam-column joints and pushover analyses of shear wall frame retrofitted with high strength concrete jacketing. Pushover analysis of a typical shear wall frame of building in the city of Madinah shows that the frame is deficient to resist seismic loading at the expected design earthquake. Retrofitting of existing shear wall frame by the extension of shear walls using high strength concrete and jacketing of the columns results in significant increase in lateral load capacity of the frame. The concrete strength has a significant impact on the failure mode and the deformation response, the mode of failure changes from the joint shear failure to more ductile flexural failure in the beam with increasing concrete strength.

Bond characteristics of fibre reinforced polymers and their use in structures was also presented. Carbon FRP sheets were shown to offer many structural and other inherent advantages as protecting deterioration of structures form harmful weather. Moreover, Sodium MNP can prevent building deterioration by reducing effects of carbonation. What we learnt was that CFRP can be effectively used in coastal areas like Karachi to prevent damage to structural elements due to highly corrosive environment in the areas adjoining the sea. GM NESPAK(Lahore) Mr.Sohail Kibria also discussed the geotechnical behaviour of high performance concrete.

As it is evident from the executive summary, it was an extremely useful and mind agitating event full of innovative and interesting topics.As number of foreign scholars participated, it was an experience that broadened our visions further for research. As remarked by a key person from Germany, this conference served beyond its technical purpose. He specifically mentioned in his closing address that Pakistan is a lovely country that is safe to travel and work in. To conclude, it is obvious that this conference not only helped to strengthen technical and research ties but also played its role to build the positive image of Pakistan.

* -Ing. Is the abbreviation for “Ingenieur” in German language.