The master builders, the designers, and the constructors of the Gothic cathedrals of the Middle Ages used intuition and experience to develop design rules based on simple force equilibrium and treated the material as rigid. This solution process provided the equivalent of what is now known as the lower-bound theorem of plastic limit analysis. This theorem was not proved until more than 500 years later. Modern lower-bound theorem shows that these design rules are safe. These simple design rules have existed from the earliest times for building Greek temples, Roman aqueducts and arch bridges, and domes and vaults. However, tests on real structures showed that the stresses calculated by designers with these rules could not actually be measured in practice. 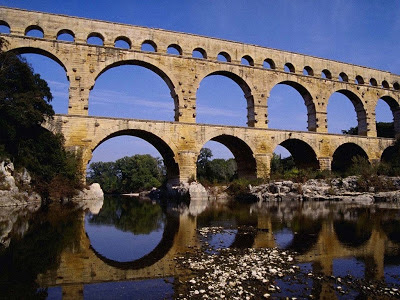 Galileo, in the seventeenth century, was the first to introduce recognizably modern science into the calculation of structures; he determined the breaking strength of beams but he was way ahead of his time in engineering application. In the eighteenth century, engineers moved away from his proposed “ultimate load” approach, and, until early in the nineteenth century, a formal philosophy of design had been established: a structure should remain elastic, with a safety factor on stress built into the analysis. It was an era of great advancement and a milestone in structural design but one that placed too much emphasis on the undue safety concern based on elastic response under working loads.

Galileo Galilei (1564–1642) was the first to use mathematics in order to describe the law of nature, which is based on observation from his experiments. Isaac Newton (1642–1727) discovered the basic laws of physics in terms of equilibrium condition (or equation of equilibrium) and equation of motion. Robert Hooke (1635–1703) described, in mathematical form, the material response to stress, which he observed in tests. He stated the linear relationship between stress and strain (Hooke’s law or constitutive law) as a function of a material constant (elasticity modulus or Young’s modulus).

Material continuity without discontinuities or cracks is a logical assumption in solid mechanics. This assumption leads to a mathematical description of geometric relations of a continuous medium known as continuum expressed in the form now known as compatibility conditions. For a continuum, the conditions of equilibrium (physics), constitutive (materials), and continuity (geometry) furnish the three sets of basic equations necessary for solutions in any solid mechanics problem in which structural engineering is one of its applications. In short, the mechanics analysis of a given structural problem or a proposed structural design must involve the mathematical formulation of the following three sets of equations and solutions:
The interrelationship of these three sets of basic equations is shown in Figure 1.1 for the case of static analysis.

The basic step of structural analysis is the application of these three sets of equations of equilibrium, compatibility, and constitutive laws. They are the fundamentals for all methods of structural analysis. In general, the three sets of basic conditions are expressed in terms of 15 equations: 3 equilibrium, 6 compatibility, and 6 constitutive equations. The solution of these 15 simultaneous equations should provide solutions of 6 stresses, 6 strains, and 3 displacements at a point in the structure system under consideration. It is the role of mathematics to achieve the solutions of these equations (Sokolnikoff, 1956).

In principle, the solution of the 15 equations for 15 unknowns is possible from a mathematical point of view. However, for real-world applications, a structural engineer must operate with ideal material models and ideal structural systems to reduce drastically the 15 unknowns. The theories of reinforced concrete design, for example, do not deal with real reinforced concrete. They operate with an ideal composite material consisting of concrete and steel, the design properties of which have been approximated from those of real reinforced concrete by a process of drastic idealization and simplification. The same process of simplification and idealization also applies to the formulation of the basic equations of equilibrium and compatibility of a real structural system.


1.3 Elastic Analysis as a Start

To simplify the field equations for a realistic engineering solution, it is more convenient to formulate the elastic or plastic relations in terms of elements from which the parts of the structure are composed rather than the material treated as a mathematical point as defined elegantly in the concept of continuum mechanics. For example, for a structural member such as a beam in a building framework, the basic element or segment can be obtained by cutting through the entire thickness of the beam section. Thanks to this approach, it is then possible to replace the six stress components acting on the cross section of the element by one dominant normal stress resultant—the bending moment, M (generalized stress). Similarly, the corresponding six deformational components can be reduced to one dominant strain resultant—the angle of relative rotation or curvature, φ (generalized strain).

This concept of using the generalized stresses and generalized strains for inelastic structural analysis and design was employed for the first time in 1952 by Prager in establishing his general theory of limit design, and, later in 1959, it was utilized prominently by Hodge in his popular text on the plastic analysis of structures (Hodge, 1959; Prager, 1952). It took great insight to fully understand the impact by unifying the conventional strength-of-materials approach and the modern theory of plasticity and limit design in a consistent manner.

The relationship between the value of the bending moment M and the angle of relative rotation φ for the ends of the section represents the material behavior of that structural element (generalized stress–generalized strain relation, Figure 1.2b). The relationship is linear and reversible for a linear elastic material, as observed by Hooke, before yielding or crack or under working load condition. With this simplification, it has become possible to develop solutions for structural members and frames. These solutions so obtained are called strength-of-material solutions. 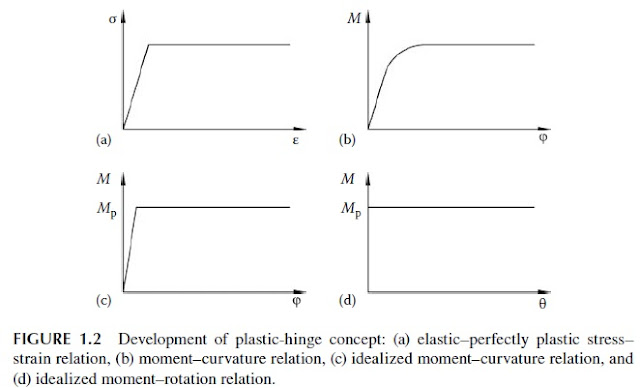 Thanks to this simplification, the complex local stress and strain states in a real sizable element of a real structure are avoided and the field of application of the theory of elasticity and that of plasticity can be broadened significantly. This expansion and generalization resulted in the development of modern structural theories, among them several structural elements including bar elements, plate elements, shell elements, and FEs.

This study and mathematical formulation of engineering structures have led to a formal three-stage process in mechanics operation, which can be summarized as follows:
This mechanics operation becomes particularly clear when this process is applied to a particular structural element and material model under consideration. Process can be formulated along with how it can be developed naturally for modern FE analysis. Since the solution for the simultaneous FE equation must be carried out numerically in an incremental form by computer, many numerical procedures were developed in the period from 1970 to the 1980s including the necessity of developing an efficient iterative process to deal with load-path dependency of the inelastic material behavior. As a result of this progress, together with the rapid advancement in computer power, large amount of numerical data were generated in a variety of structural engineering applications during this period.With this large amount of database generated, the probability theory was utilized to analyze these results leading to the development of reliability-based code in recent years. It was an era of great advancement.