Retarding admixtures are used to slow down the initial set of the concrete whenever elevated ambient temperatures shorten working times beyond the practical limitations of normal placement and finishing operations.

Retarders are specified in ASTM C 494 as Type B admixtures and are used in varying proportions, often in combination with other admixtures, so that, as working temperatures increase, higher doses of the admixture may be used to obtain a uniform setting time (ACI 305R). Simple retarders typically consist of one of four relatively inexpensive materials: lignin, borax, sugars, or tartaric acids or salts. Retarders serve best to compensate for unwanted accelerations of working times due to changes in temperature or cement or due to other admixture side effects. They also are used to extend the working time required for complicated or high-volume placements and for retarding the set of concrete at a surface where an exposed aggregate finish is desired.

Retarding admixtures interfere with the critical chemical reactions of the fastest hydrating cement reactant groups, C3A and C3S. These reactants normally initiate the hydration process in the early stages. Eventually, the hydration process accelerates due to another initially slower reaction group, and the heat of reaction allows the hydration to continue at a normal rate until completion. Typical retardation effects are significant for the first 24 to 72 hours. 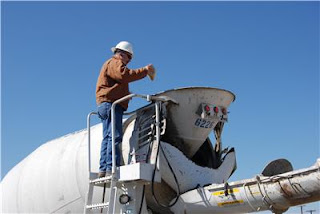 The intent is for concrete in its plastic state to be affected by retarders with little or no negative effect on the hardened properties. Improvements in fresh concrete properties include extended times for workability and set, better workability with less water, frequently an increase in air content, and minimal delay in final cure time. Retarders may reduce critical physical properties when used in excess. Changes in hardened concrete properties due to retarders usually relate to delayed early strength development which may affect early (especially plastic) shrinkage and creep.

Dosage rates vary considerably depending on the needs of the concrete application, ambient and material temperatures, retarder type and concentration, cement type and content, and presence of other admixtures in the concrete, but it generally is best to use the least amount necessary to produce the required properties. This is typically between 2 and 7 fluid ounces per 100 pounds cement (ACI 211.1-4) added with a portion of the mixing water a few minutes after the first addition of water. This is recommended to ensure the most efficient and uniform dispersion throughout the batch.
Manufacturers’ recommendations are a good place to start, but trial batches under the expected field conditions followed by a complete evaluation of effects on all critical properties should be conducted. It should be noted that retardation may be a side effect of other chemical admixtures that are specified for the adjustment of other properties in the matrix. If the retardation effect is desirable and predictable, as in many water-reducing admixtures, the material is marketed as such (e.g., water-reducing and retarding admixtures). Because users noticed that earlier water reducers tended to retard set times, today many retarders are meant to serve double duty as water reducers.If the retardation side effect is predictable but not desired, the simple addition of a compatible accelerator may be all that is necessary. If, however, the retardation side effect is not desired or predictable, an incompatibility may exist between the cement or other admixtures and the corrupting admixture. Every effort must be made to determine the faulty ingredient and substitute it with a more compatible choice.