Book: Elements of the Theory of Structures by Jacques Heyman

A good grasp of the theory of structures - the theoretical basis by which the strength, stiffness and stability of a building can be understood - is fundamental to structural engineers and architects. Yet most modern structural analysis and design is carried out by computer, with the user isolated from the process in action. This book, therefore, provides a broad introduction to the mathematics behind a range of structural processes.
The basic structural equations have been known for at least 150 years, but modern plastic theory has opened up a fundamentally new way of advancing structural theory. Paradoxically, the powerful plastic theorems can be used to examine 'classic' elastic design activity, and strong mathematical relationships exist between these two approaches. Some of the techniques used in this book may be familiar to the reader, and some may be new, but each of the topics examined will give the structural engineer fresh insight into the basis of the subject. 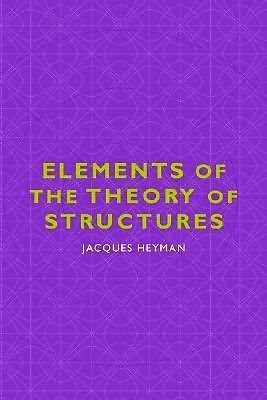 The theory of structures is one of the oldest branches of engineering. There was early interest in large, indeed ostentatious, buildings, and the design of such buildings needed more than peasant tradition; they were intended to be, and were, spectacular feats, and they required professional advice from acknowledged masters. Names of their designers are known through two or three millenia, and building manuals have survived through the same period. (Man showed also an early interest in waging war, and military engineering
is another ancient profession; civil engineers are non-military engineers.)
As might be expected from an ancient discipline, the theory of structures is an especially simple branch of solid mechanics. Only three equations can be written; once they are down on paper, the engineer can in principle solve the whole range of structural problems. Sometimes the equations can be examined individually; sometimes a simple tool, virtual work, can be used to combine them to yield surprising results. In every case, however, it is only the three master equations which come into play. Equations of statics will ensure that a structure is in equilibrium. Geometrical equations will ensure that all parts of a structure fit together before and after deformation, and that the structure rests securely on its foundations. Finally, the properties of the material used to build the structure will enter the equations relating the strain in a member to the applied stress.
These equations were, effectively, known by 1826 (Navier), or more certainly by 1864 (Barre de Saint-Venant). Of course, although the equations are essentially simple, individual pieces of mathematics may become difficult. By the end of the nineteenth century, indeed, many problems had been formulated completely, but the equations were so complex that they could not usually be solved in closed form, and numerical computation was impossibly heavy. This situation gave an exhilarating spur in the twentieth century to the development of highly ingenious approximate methods of solution, and also to a fundamental reappraisal of the whole basis of the theory of structures. These developments have now been almost completely arrested by the advent of the electronic computer; the Victorian equations, insoluble a century ago, can now be made to yield answers. That the equations may not be a good reflexion of reality, so that their solutions do not actually give the required information, is only slowly being realized.
This book is concerned with the basic equations and the way in which they should be used. The equations themselves have an intrinsic interest, as does their application to a whole range of structural problems. The later chapters of this book give a tiny sample, from the almost infinite number of topics in the theory of structures, for which the results are important, or startling, or simply amusing. structure (from the Latin struere) is anything built: say an arched bridge or a cathedral from stone; a ship or a roof (and perhaps a spire) from timber; an earth dam or an excavation in soil for a fortification; or (as isolated usages) iron bars (in China first) or vegetable ropes to form suspension chains in bridges. Before the Renaissance all these structures were built without calculation, but not without 'theory', or what today would be called a 'code of practice'. Mignot's statement in 1400, at the expertise held in Milan, that ars sine scientia nihil est (practice is nothing without theory), testifies to the existence of a medieval rule-book for the construction of cathedrals; the few pages of a builder's manual bound in with the book of Ezekiel in about 600 BC show that there were yet earlier rules. These rules, for construction in the two available materials, stone and wood, were essentially rules of proportion and, as such, are effectively correct.
Stresses in ancient structures are low, and this has helped to ensure their survival. The stone in a medieval cathedral, or in the arch ring of a masonry bridge, is working at a level of one or two orders of magnitude below its crushing strength. Similarly, deflexions of such structures due to loading are negligibly small (although the movements imposed by warping of the material or by slow movements of foundations may often be seen). What is necessary is that ancient structures should be of the right form; a flying buttress must be of the right shape, an arch ring must have a certain depth, and a river pier must have a minimum width. Correct form is a matter of correct geometry, and the ancient and medieval rules of proportion were established empirically to give satisfactory designs.
There are three main criteria which must be satisfied if a structure is to be successful (and a large number of other minor criteria that the modern designer will also take into account); they are those of strength, stiffness and stability. The homely example of a four-legged table may make clear the three aspects of performance that are being examined. The legs of the table must not break when a (normal) weight is placed on top, and the table top itself must not deflect unduly. (Both these criteria will usually be satisfied easily by the demands imposed by a dinner party.) Finally, the stability criterion may be manifest locally, or overall. If the legs of the table are slender, they may buckle when the overall load on the table is increased. Alternatively, if the legs are not at the four corners, but situated so that the top overhangs them, then placing a heavy weight near an edge may result in the whole table overturning.
DOWNLOAD