In 1948 Karl Terzaghi, in the preface to the First Edition, wrote:

Unfortunately the research activities in soil mechanics ... diverted the attention of many investigators and teachers from the manifold limitations imposed by nature on the application of mathematics to problems in earthwork engineering. As a consequence, more and more emphasis has been placed on refinements in sampling and testing and on those very few problems that can be solved with accuracy. Yet, accurate solutions can be obtained only if the soil strata are practically homogeneous and continuous in horizontal directions. Furthermore, since the investigations leading to accurate solutions involve highly specialized methods of sampling and testing, they are justified only in exceptional cases. On the overwhelming majority of jobs no more than an approximate forecast is needed, and if such a forecast cannot be made by simple means it cannot be made at all. If it is not possible to make an approximate forecast, the behavior of the soil must be observed during construction, and the design may subsequently have to be modified in accordance with the findings. These facts cannot be ignored without defying the purpose of soil mechanics. They govern the treatment of the subject in this book. 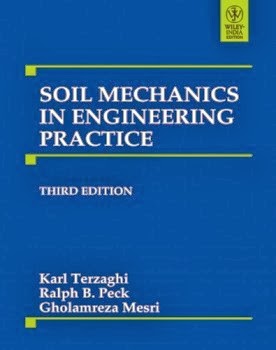 In the half-century since these words were written, research in sampling and testing has continued unabated, and a vast literature has accumulated about the properties of soils, much of it directed toward advancing one or another school of thought concerning idealized conceptions of soil behavior. During the same time, remarkable advances in electronic calculation have made theoretical forecasts possible for problems involving complex boundary and stratigraphic conditions. Thus it may no longer be true that if a forecast cannot be made by simple means it cannot be made at all. In exchange for this progress, however, it has become increasingly important that the choice of soil properties used in the analyses be based on a fundamentally correct knowledge of soil behavior.