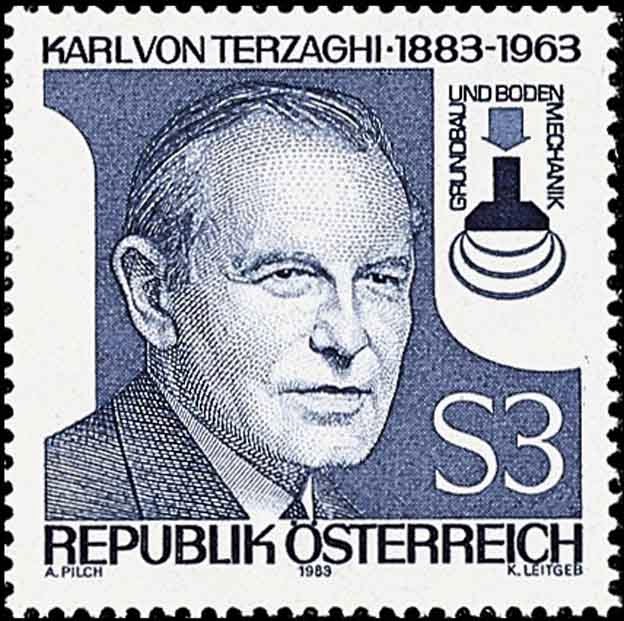 Karl Terzaghi, born October 2, 1883 in Prague (Czech Republic) and died October 25, 1963 in Winchester, Massachusetts, is generally recognized as the Father of Soil Mechanics. His early professional life was spent in a search for a rational approach to earthwork engineering problems. His efforts were rewarded with the publication in 1925 of his famous book on soil mechanics: this publication is now credited as being the birth of soil mechanics.

Between 1925 and 1929, Terzaghi was at M.I.T. initiating the first U.S. program in soil mechanics and causing soil mechanics to be widely recognized as an important discipline in civil engineering. In 1938 he joined the faculty at Harvard University where he developed and gave his course in engineering geology. Terzaghi's amazing career is well documented in the book From Theory to Practice in Soil Mechanics (Wiley,
1960). All of Terzaghi's publications through 1960 (256) are listed in this book. Terzaghi won many honors, including the Norman Medal of the American Society of Civil Engineers in 1930, 1943, 1946, and 1955.

Terzaghi was given nine honorary doctorate degrees coming from universities in eight different countries. He served for many years as President of the International Society of Soil Mechanics and Foundation Engineering. Not only did Terzaghi start soil mechanics but he exerted a profound influence on it until his death. Two days before he died he was diligently working on a professional paper. Terzaghi's writings contain significant contributions on many topics, especially consolidation theory, foundation design and construction, cofferdam analysis, and landslide mechanisms. Probably Terzaghi's most important contribution to the profession was his approach to engineering problems, which he taught and demonstrated.

Please share information about other legend engineers in comments section below. Your contributions are most welcome.