The slowdown in China, difficulties in the mining industry and the depreciation of the Yen led to a reshuffle in  the global construction equipment industry last year.


Revenues for the world’s 50 largest construction equipment manufacturers fell -10% last year to US$ 163 billion, as a variety of factors impacted on this cyclical industry. 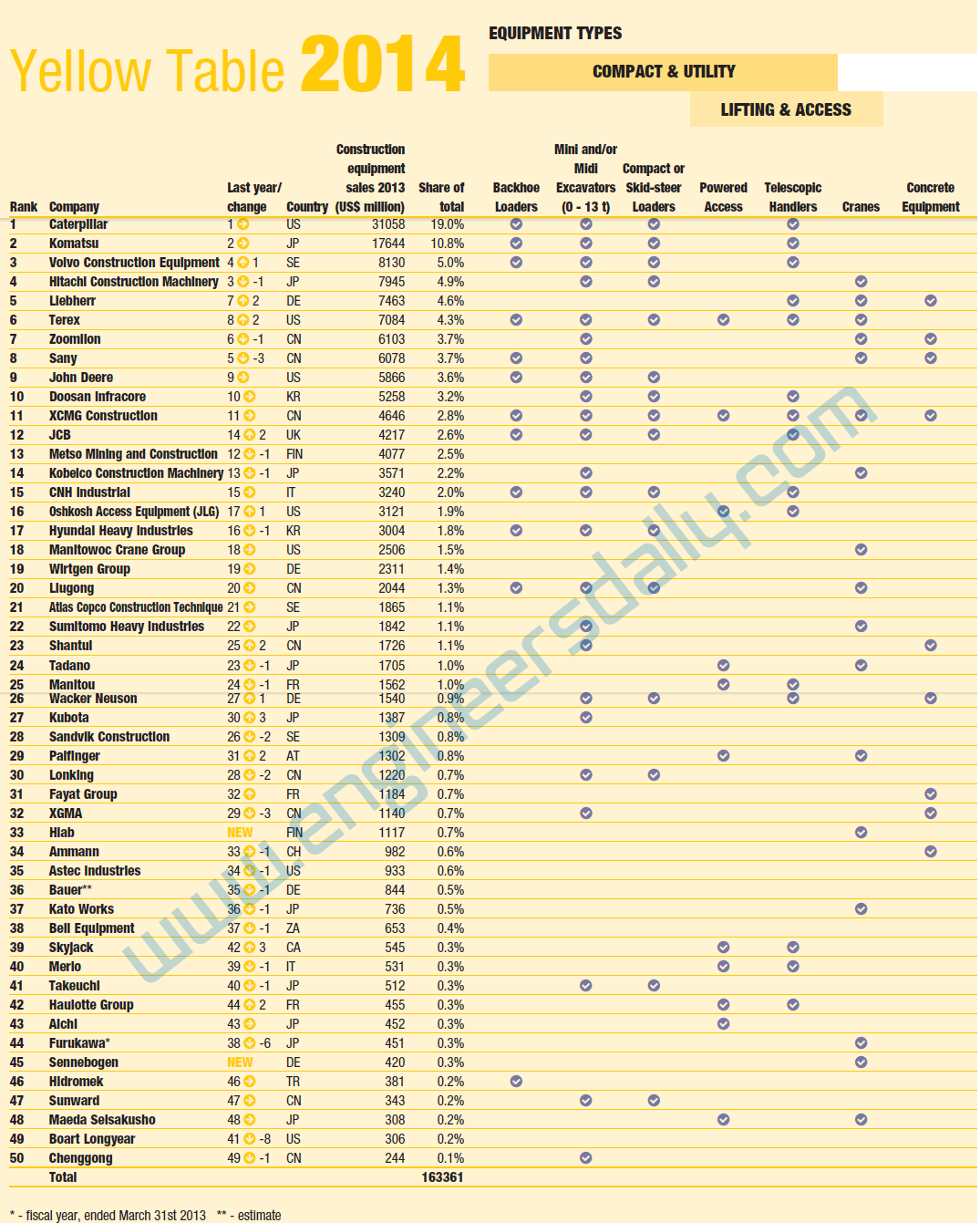 The most profound came from a downturn in the global mining industry, which pulled revenues down for equipment manufacturers around the world. Although the Yellow Table attempts to measure revenues from construction equipment sales and excludes companies that serve only the mining industry, it is inevitable that a downturn in mining will impact on many of the companies in the league table. This is due to the blurred margins between the two industries and the wide variety or different equipment used for mining in different parts or the world. 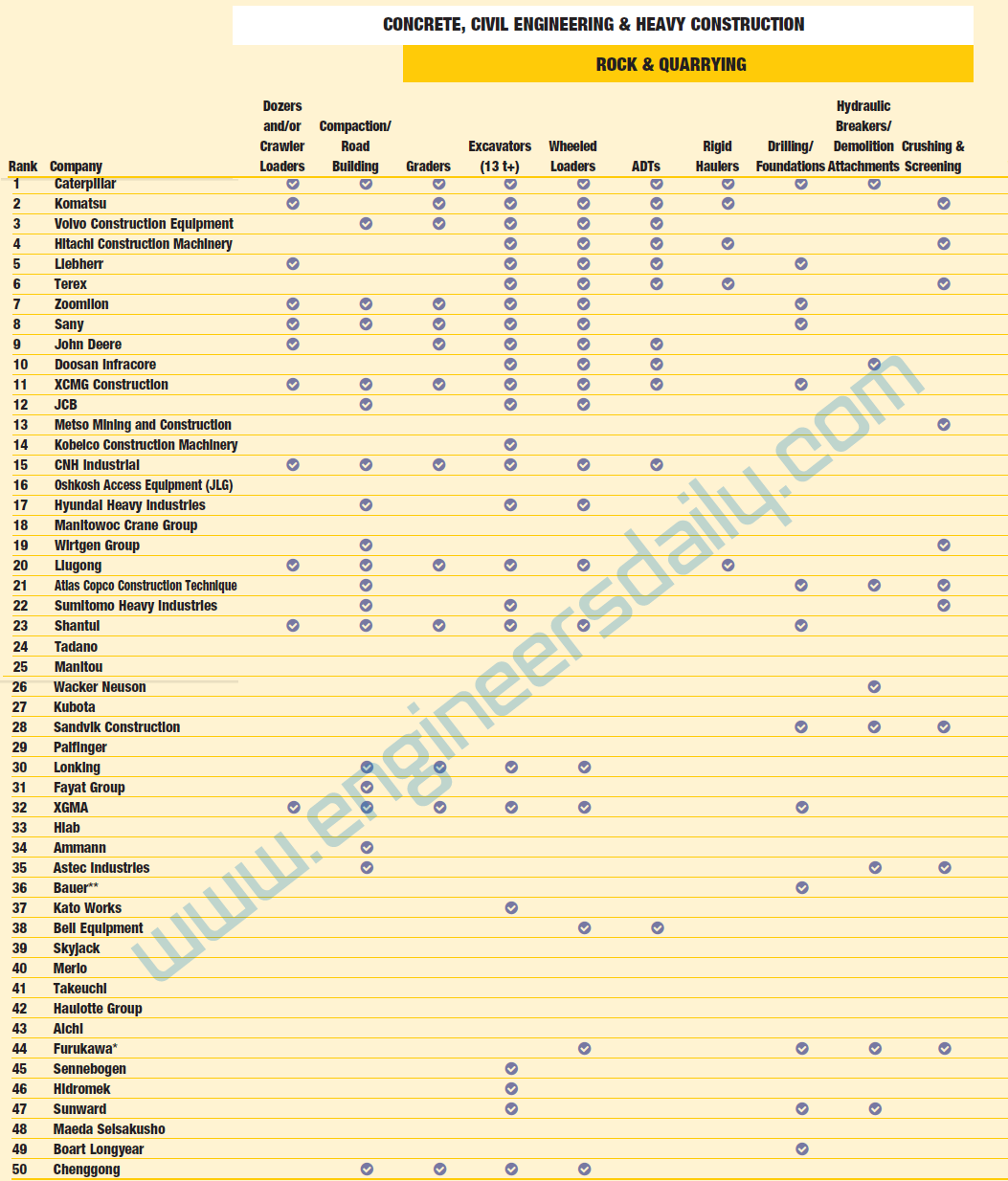 For example it was the downturn in mining that was the main driver for the near US$ 10 billion decline in first-placed manufacturer Caterpillar's equipment revenues in 2013, compared to 2112. Indeed, this was a factor for all of the lone-line manufacturers in the top 10, all of which saw their revenues decline in Dollar terms last year.
However, the greatest impact from the downturn in mining last year was felt by drilling equipment specialist Boart Longyear which fell eight places from its position in 2012 to no. 49 in this year’s ranking.
But aside from this decline for a heavily mining dependent manufacturer, the downturn seems to have hit companies in the broad earth moving equipment industry harder than manufacturers in niche areas. As well as seeing a fall in revenues in 2013 - the year that rankings in this year’s Yellow Table are based on - half of the companies in the top 10 have seen their share of total revenues decline since last year's study. For example, Caterpillar’s share is down to 19.0%, compared to 21.8% in last year’s Yellow Table, Komatsu has fallen to 10.8% from 11.3%. Hitachi, Zoomlion and Sany also saw their shares fall.

Despite some small gains for the other five companies in the top 10, the net result was that these large  companies accounted for 62.8% of the top 50’s revenues in this year's study. This was the lowest the proportion has been since 2010, when a surge for several mid-sized Chinese manufacturers squeezed the market shares of the larger players. The Chinese market also had a part to play in this year’s edition of the Yellow Table, with the country's continued slowdown in construction and the high population of young machines available from the 2009/10 stimulus boom depressing revenues for domestic manufacturers.

This saw the likes of Zoomlion and Sany lose places within the top 10, and Lonking, XGMA and Chenggong also fall further down the table. However, XCMG, Liugong and Sunward held their ground, while Shantui moved up two places.

For the Yellow Table, a rate of US$ 1 = JPY 97.63 was used, which puts the Yen some -22% weaker than the rate of US$ 1 = JPY 79.85 that prevailed just a year ago. The weaker Yen has been a boon to Japanese manufacturers’ exports over the lasr year. Revenues in Yen terms rose for many as a result in 2013. Komatsu’s revenues from construction equipment sales in the 2013 calendar year were JPY 1,723 billion, compared to JPY 1.678 billion the previous year - a +2.3% increase.


Similar effects came into play for other Japanese manufacturers in the Yellow Table, and contributed to slides down the rankings for Hitachi, Kobelco, Tadano and Furukawa. Although other Japanese manufacturers held their ground, or even gained a few places in Kubota’s case, the net result was that their share of total revenues fell from 23.1% in 2012 to 22.4% this year.

The decline in share and absolute revenues among Chinese and Japanese manufacturers  last year, combined with Caterpillar’s big drop in sales had a posiTive impact for the European companies in the Yellow Table. They saw their share of the top 50's revenues rise from 26.0% this year from 21.1% last year. However, this was as more to do with technical points about how the Yellow Table is compiled than a sudden surge in revenues.

The first point is thar CNH has been reclassified as an Italian company in this year's Yellow Table, following its incorporarion with Fiar Industrial into a new Italian entity, CNH Industrial. Other changes in favour of the European share are the addition of Sennebogen and Hiab to the ranking this year, two companies for which data has newly become available. They add a further 1.0% of the top 50 revenues to the European total.

But the revenue increase was still useful in terms of European companies' placinps. Both Volvo and Liebherr moved up within the top 10, and JCB also did well to gain two places at no. 12. Further down the table, other European gainers included Wacker Neuson, Fayar and Haulote. What's more, there were no disastrous declines - no European company fell more than two places in this year's Yellow Table.

Positions in the Yellow Table are based on sales in the 2013 calendar year in US Dollars. Currencies have been converted to Dollars based on the average exchange rate over the course of 2013. Data was gathered from a variety of sources including audited accounts, company statements and reputable third-party sources.  In Japan, India and certain other countries, the use of the fiscal year (ending March 31 ) has made it impossible to establish calendar year information. In these cases, fiscal year results were used. In some cases Engineersdaily has made an estimate of revenues based on historical data and industry trends. while every effort has been taken to ensure information in this report is accurate, Engineersdaily does not accept any liability for errors or omissions.