Infrastructure First - An Analysis About Indian Market and Opportunities 2014

India must invest in additional infrastructure in order to meet even its reduced economic outlook. Emerging market economies have been under pressure in recent months, and India is among those most affected. These economics boomed for much of the past decade with easy monetary policy globally, the commodities super-cycle and rapid globalization of trade. In many cases, there was additional fiscal stimulus to counteract the global recession.
However, while the share of global GDP accounted for by imports increased from just under 20% in 1995 to over 30% in 2011. It has remained at that level into 2014. This stagnation has limited the export opportunities that have been crucial to emerging markets such as India. Countries such as India also face an additional challenge - when financial returns were low in the US and Europe, investors looked to emerging markets with their potentially high returns despite higher financial risk. With the US in economic recovery and Europe stabilizing, developed economies offer higher potential. as risk has grown in India and other markets. The result has been limiring the flow of foreign direct investment on which India relies.

Most importantly, lndia like many emerging markets. failed to engage in market reforms when the opportunity afforded itself. As a result financial incentives working against India and the unattractive business environment is reinforcing the negative trend.

The worst for India's economy may be over, but the recovery will be shallow and protracted with weakness well into the next fiscal year at least. The main engines of growth historically, investment and private consumption - remain fundamentally weak, inevitably dragging down industrial production, manufacturing and construction.

Infrastructure spending has been a bright spot - however, the government budget deficit will limit additional fiscal boosts to growth. The outcome of general elections in May should reduce political uncertainty, opening up prospects for higher investment and growth late in 2014.

Although uncertain, India's medium and long term growth prospects are still favorable, as expected reforms with a new government confer significant gains in supply-side efficiency. Boosting investment is crirical to India’s recovery. Fixed investment growth has fallen to +2.8% per year compared with double digit rates in the mid 2000’s, partially due to stalled reform.

The government did manage to clear 36 big ticket investment projects late last year worth nearly US$ 27 billion, but the financing and implementation of these projects may still prove to be difficult given deteriorating public finances and rising banking sector risks.

On the positive side, India is blessed with favourable demographics and abundanr labour, strong export potential, and growing contributions from the service and construction sectors. Rapid urbanisation rates will also act as an important force of change in the long-term.

The construction outlook reflects the current realities in lndia, while building on the expectation for reform. In particular, the forecast growth rates are typically a full percentage point below what was projected last year(2013), given what will be tepid GDP growth in the near term.

Also, forecast growth is back-loaded, assuming that reforms materialise after the election and take time to work through to the construction economy. For example, construction of non residential structures will average compound growth of +7.9% over the next five years, but growth for the next three years will average +6.2.

The average over the following years will be + 8.2%. To the extent that reforms fail to materialise, medium to long term growth will lose considerably - potentially shaving two percentage points from potential growth. The forecast for the residential sector is relatively weak. Urbanisation, popularion growth and an emerging middle class contribute to growth, but consumer confidence remains weak and higher interest rates are particularly costly to this segment. Unlike China and Brazil, India offers limited public spending on housing, and private demand will be limited.

Office construction has been strong for the past five years, driven by India’s technical services industry. Demand from this sector will wane over the forecast, but anticipated growth in financial and business services will drive continued growth. The forecast for growth in industrial structures does hinge upon market reforms to boost India's manufacturing industries and export competitiveness. Reforms have already been partially implemented for some commercial categories, notably retail trade.

Infrastructure has been the strongest performing segment over the past five years, and it will remain so over the forecast. India absolutely has to invest in additional infrastructure in order to meet even its reduced economic outlook.

The forecast does assume some structural reform in order to attract private capital into public - private partnerships. India has proven that this can work for airports - the next step is to expand that success to roads, railways and electrical generation, transmission and distribution.

While the construction outlook for India has diminished with weakness in Europe and recovery in North America, it still offers significant potential. The next two years will feature slower construction than we have come to expect from India, bur still strong by global standards. The continued emergence of lndia's economy is clear, and the need for new and upgraded facilities must be met. For India to realize its potential, the education system requires significant investment, and the expectation is that the new government will begin to address this. 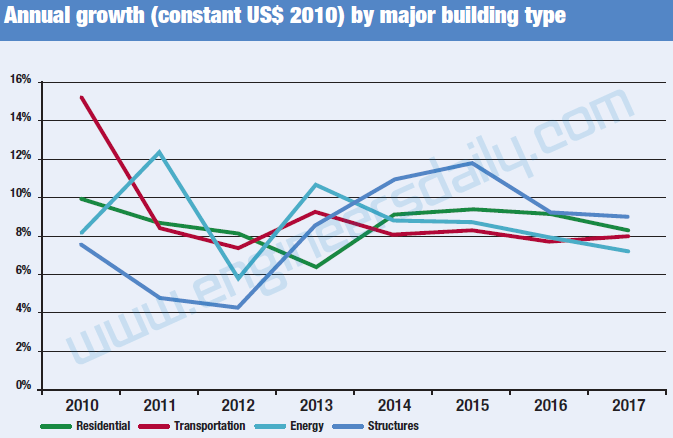 The challenge for India is to overcome the ‘license raj’ to free up its abundant resources for economic growth. If the new government can succeed with these measures, the construction outlook could be quite attractive.