Shear strain, , describes the element level intensity of deformation due to shape change, and it is defined as the tangent of the angle change, due to deformation, between two lines that are originally perpendicular.

We have only considered elements with normal strain in the previous article, those that elongate or shorten, but remain rectangular. Now, we consider shear strain, which quantifies deformation in which element edges no longer form right angles.
1. Shearing corresponds to internal surfaces that slide parallel to themselves and elements that distort. Take a rectangular block of rubber, attach metal plates to its top and bottom, and etch a grid of square elements on its side face. 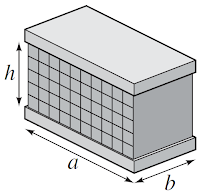 Move the upper plate relative to the lower plate in the direction parallel to the dimension a, maintaining the plates parallel. The etched grid distorts as shown here.
Not all elements deform the same, but elements located away from the left and right edges distort identically. Their lower and upper faces do not lengthen. The side faces are no taller, but they have tilted.

2. Shear strain is quantified by the angle change at an element corner when it is deformed. Here is the key feature of shear strain: element edges, which were originally perpendicular, make angles that are greater than and less than 90° or π/2 radians when deformed. Let be the change from the initial right angle.

The greater is β, the greater is the distortion or shear of the element. The shear strain,γ, is defined in terms of the angular distortion β.
γ=tanβ
If β in radians is small (β<<1), then tanβ≈β, so γ=β. Also, when β is small, the change in length of the vertical elements is negligible.

4. Besides two oppositely acting shear forces, there must be additional loads to balance moments. While one can readily picture the shear strain, it is more difficult to picture the forces on the plates that shear the block. Here are several possibilities (only the second and third are in equilibrium).

5. Bodies that shear must have internal forces (shear stresses) acting on both horizontal and vertical planes. Assume the forces to be as in the third case above. Consider the internal forces at a surface parallel to F0. There must be a horizontal shear force V equal to F0. We call this a shear force because it acts parallel to, rather than normal to, the face on which it acts. 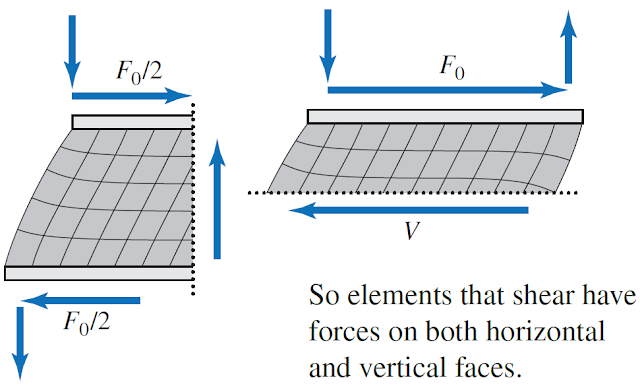 Now cut across the block vertically. There must be a vertical shear force, although its magnitude is unclear because it depends on how the moment is balanced. Shear stress, τ, is defined as the shear force per unit area. The shear stress is rarely uniform, but the average value can be found in terms of the shear force, V, and the area, A, on which it acts.
τ=V/A
For the sheared rubber block:
τ=V/A=F0/ab
6. Shear stress, or shear force per area on an element, must be equal on horizontal and vertical planes. The shear stress just found is shown as τ1 acting on the top and bottom faces of a small element. There are likewise equal and opposite shear stresses,τ2, on the vertical faces. 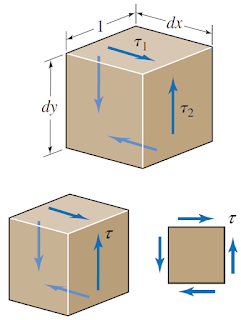 Shear modulus, G, captures the intrinsic stiffness of a material when it shears elastically, and it is defined as the proportionality between shear stress and shear strain.
This video might also be helpful for some concepts.

Did you enjoy this article? Spread the word by sharing below.