Failures that would occur when an increasing load reaches a critical level are quite well known. Also common, and more difficult to design for, are fatigue failures, which are due to fluctuating loads.

1. A load might not cause failure when applied once, but might cause failure if applied and removed multiple times. You can bend a paper clip severely, and it won’t break. But bend it back and forth repeatedly, and eventually it will break. This is the essence of fatigue failure: failure can occur due to a cyclically (repeatedly) applied load, even when a single loading of the same magnitude will not cause failure.

2. In engineering applications, it is common for loads to be applied multiple times. There are many circumstances when parts are naturally subjected to cyclic loads. For example, a hip implant is loaded cyclically during walking, because weight is placed on and removed from the leg. The stress in a bicycle crank fluctuates with pedaling. Perhaps more detrimental to bicycle life are the more severe, though less frequent, impacts of the tires in potholes or bouncing off curbs. 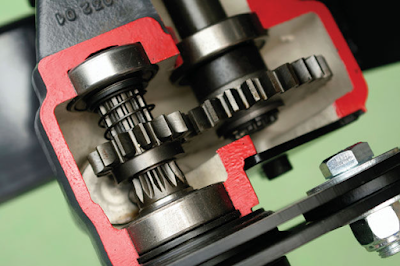 A rotating shaft is prone to fatigue. The forces on gears might lead to bending stresses in the shaft, with maximum tension at, say, the top of the shaft. Every time the shaft rotates, a particular element of material rotates from the top (σ>0) to the bottom (σ<0) and back. So each shaft rotation corresponds to a stress cycle, of which there can be thousands every minute, depending on the rotation speed.

3. Describe cyclic loads as load or stress vs. time. Here we show the case of so-called fully reversed loading: the stress at a point fluctuates with time, with the maximum stress in tension equal to the maximum stress in compression. The cycling is described by the amplitude σa. The time between cycles, and the shape of the cycle with time, are usually much less important. We are interested in how σa affects the number of cycles that can be applied with failure. 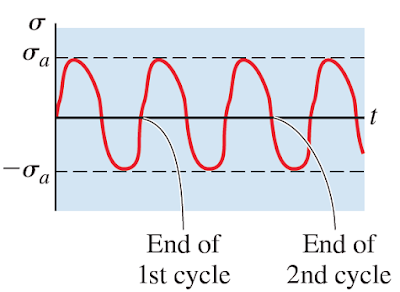 5. Fatigue damage in metals usually involves initiating a crack, which grows until catastrophic failure. Fatigue failure often initiates because of enhanced stress near a particular feature, or even at a rough spot on the surface, where local plastic deformation occurs. With enough stress cycles, this leads to the formation of a crack. Cracks grow with further cycles. Since the cracked area carries no load, the average stress on the uncracked portion increases as the crack grows. When the crack becomes too long, sudden failure occurs with the crack running across the part. Sometimes inspections can detect cracks before they lead to failure. Based on experience, engineers may decide to leave the crack as is, to repair it, or to replace the part.