Analytical estimating is a method for determining unit rates by examining individual resources and the amounts needed for each unit of work.This method for pricing bills of quantities is described in the CIOB Code of Estimating Practice, in four stages:

1. Establish all-in rates for the individual resources in terms of a rate per hour for labour, a rate per hour for items of plant and the cost per unit of material delivered and unloaded at the site.
2. Select methods and outputs to calculate net unit rates to set against items in the bill of quantities.
3. Add to the net cost project overheads, contingencies, inflation and risk.
4. Summarize resources and prepare reports for management. 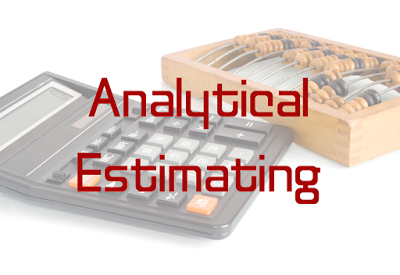 The ability to analyse unit rates is an important skill for all those engaged in construction. Quantity surveyors and architects may need to value variations using clause 13.5.1.3 of the Standard Form of Building Contract. This states ‘where the work is not of similar character to work set out in the contract bills the work shall be valued at fair rates and prices’. This presumably means a properly built-up unit rate. Contractors rely on the pricing carried out by their sub-contractors for an increasing share of the work. A contractor’s estimator should be able to build up rates for his direct work and be able to check the rates offered by sub-contractors.

Analytical pricing of bills of quantities is more than just applying resources to items of work to produce a unit rate.The constituents of a rate are inserted in the bill; and totalled for each page, each section, and carried to the summary, so that the contractor has a complete picture of the resource costs at the final review meeting. Figure 1 shows a typical printout from a contractor’s bill where the rates and totals are shown between the item descriptions. Figure 2 is an example of a contractor’s bill of quantities priced analytically using a spreadsheet package.

The benefits of analytical pricing of bills of quantities are:

1. The total cost of labour is needed to calculate the cost of insurances, transport of operatives, small tools and equipment, and workforce levels.
2. The breakdown of resource costs is needed to calculate the allowance for firm price tenders.
3. Labour and plant totals for elements of the work are used to calculate activity durations for the tender programme.
4. A breakdown of prices is needed in each trade to make comparisons between direct work and labour-only sub-contracts.
5. The costs of resources are needed to calculate the cost commitment cash flow forecast.
6.  Adjustments can be made to any part of the estimate right up to the submission date.
7.  The  resource  breakdowns will be used  on site for post-tender cost control, bonus  systems, monitoring and forward costing.

Most contractors know the benefits of analytical estimating but sometimes have difficulty finding time to apply the technique to all tenders.The two main problems are that all the rates must be priced analytically for the system to work, and many extra calculations are needed to extend the rates to totals. A computer estimating system is designed to overcome these difficulties and will produce the resource summaries automatically.

1. All rates shall be inclusive of labour, materials, transport, plant, tools, equipment, establishment and overhead charges, and all associated costs, margins and profit.
2. All items shall be priced; the value of any items unpriced shall be deemed to be included elsewhere in the bill of quantities.

The contractor, on the other hand, is likely to produce rates which exclude:

1. General overheads and establishment charges;
2. Profit, which can only be calculated after the net estimate is complete;
3. Restrictions, which apply to more than one item such as difficult access, difficult handling and protection;
4. Plant, which is common to several activities such as compressors, hoists, mixers, dumpers and cranes.

Contractors may include a nominal mark-up or ‘spread’ to the rates, which can be supplemented by sums in the preliminaries part of the bill when the true overheads and profit are known after the final review meeting. A computer-aided estimating system would allow some of the overheads and profit to be spread over various parts of the bill of quantities. For example, a contractor might want to add 20% to the earthworks rates. This could improve the cash flow position of the project but would put the contractor at risk if the extent of earthworks reduced.

There are many PQSs and civil engineers who would want to introduce analytical bills.This would be a bill format with extra columns for labour, plant, materials, sub-contractors, and overheads/profit, which would be submitted by the lowest tenderer before entering into a contract.The client’s consultants argue that although contractors may resist this duty to reveal confidential information, the idea has the following advantages:

1. There would be a clearer basis from which to value variations.
2. The settlement of final accounts could be based on an examination of which elements had changed, and the effect on the programme may be clearer.
3. The design team could see where they had chosen designs which were labour-intensive.
4. If the analysis was extended into valuations, the contractor could use the data for his own cost monitoring systems without doubling his effort.

There may be contractors who will object to giving a full breakdown of their rates. In order to comply with the instructions to tender, they may insert all their rates in the sub-contract column, and argue that the work will be sub-contracted. Change could come through trust – brought about by partnerships between clients and contractors.