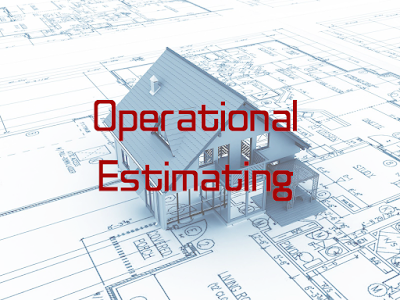 Operational estimating is a form of analytical estimating where all the resources needed for part of the construction are considered together. For example, an estimator pricing manholes using the Civil Engineering Standard Method of Measurement (CESMM) needs to gauge the time taken to build a complete manhole, whereas a building estimator is expected to price all the individual items for excavation, concrete work, brickwork etc., measured under the rules of the appropriate work sections.

The following examples show some of the many other situations where work is priced as whole packages:

1. Excavation including trimming, consolidation and disposal;
2. Placing concrete in floor slabs including fabric reinforcement, membranes, isolation joints and trowelling;
3. Formwork to complex structures including a unique design, hired-in forms and falsework;
4. Drain runs including excavation, earthwork support, bedding, pipework and backfill;
5. Repairs which often involve more than one trade or a multi-skilled operative;
6. Roof trusses including the use of a crane, a suitable gang of operatives and temporary works.
It must be said that building estimators have become skilled at applying production outputs to units of work and then occasionally employing operational estimating techniques to check the results. Civil engineers, on the other hand, usually examine methods and durations before pricing the work.This is because different construction methods for civil engineering can have a significant effect on costs. There is also a greater reliance on the specification, the drawings and preambles which give the item coverage. The term ‘operational estimating’ is often applied to methods that rely on a forecast of anticipated durations of activities, and a resource levelling exercise. The estimator must start with an appraisal of the details on the drawings, the extent of the work described in the specification and bill, and a study of the site conditions.

Next, the sequence of work will be found by considering the restraints brought about by site layout, client’s requirements, the design, time of year, and temporary works.The critical operation at each stage of the construction can then be plotted and the rest of the activities sketched in. Labour and plant schedules can be drawn up for direct work, specialist sub-contractors will be asked for their advice about their work. It may be necessary to change the programme if there are any unwanted peaks and troughs in the resources needed on site. The estimator will then have a list of resources for each operation from which to calculate costs. This approach will often produce a cost based on a particular method for carrying out the work.

If this has brought about a saving in costs the estimator will prepare a method statement so site staff can understand the assumptions made in preparing the estimate. When a building estimator uses operational estimating with a traditional bill of quantities he has great difficulty dividing the cost of a piece of work among all the related bill items. Where, for example, should an estimator put the rate for casting a concrete floor which includes a DPM, fabric reinforcement, power floating and sealer? The PQS often insists on rates being inserted against items that have a value, so there is better financial control during construction. Clearly this is not a problem with a contractor’s bill of quantities produced for design and build or plan and specification projects, because there is no bill of quantities submitted.

Another solution to the problem for building estimators would be to rough price the bill, early on in the tender period and adjust the balancing sums of money when operational methods highlight greater or lower costs.This is commonly done during the final review stage, and the rough pricing technique is popular with those using computer systems.
The advantages of operational estimating are:
1. Activities are examined to select those methods that are practicable.
2. Outputs are based on a programme, which includes holiday breaks, time of year, idle time, facilities available on site etc., giving a more realistic guide to the time needed for labour and plant.
3. Alterations and repair work are usually measured as global items which can be overpriced if all the possible trades are examined separately.
4. In a competitive market, the estimator may only look at the labour and plant needed for the core item of work; such as the brickwork in a manhole assuming the bricklayer can fix the cover while finishing the brickwork and the excavator can dig the pit when it digs the pipe trench.
Figure 1 is a contractor’s bill of quantities for a weighbridge foundation priced analytically. The estimator used an all-in rate of £12.00/hour for all his labour and applied his usual labour outputs from his tables of constants.

The site manager has kept records from previous similar jobs which show that this type of weighbridge foundation usually takes two weeks to construct with four men, and a return visit is needed for two men to grout in the equipment. A backacter and roller costing £28.00/hour is needed for three days.This gives the following net cost for labour and plant:
Labour
4 nr x 2 weeks x 45 hours x £12.00 = 4320.00
2nr x 2 days x 9 hours x £12.00 = 432.00
Total £4752.00

Plant
1 nr x 3 days x 8 hours x £28.00 = £672.00
It can be seen from the comparison that when the project is assessed as a whole, the net cost of labour and plant is more than the total from the unit rate analysis (Fig. 1).The estimator may have used his normal constants for labour and plant without checking whether there is a continuous flow of work for labour and plant resources. Perhaps the site manager should next look at materials wastage that he has experienced, in particular blinding concrete and fabric reinforcement, which could be significantly higher for such a small contract.