Solved Examples for Method of Joints for Truss Analysis

The truss shown in Fig. 1 is loaded by an external force F. Determine the forces at the supports and in the members of the truss.

Fig. 1a represents a simple truss that is completely constrained against motion. Therefore, it is statically determinate. The members of the truss are numbered in the free-body diagram of the complete truss (Fig. 1b). Zero-force members are identified by inspection and marked with zeroes: member 4 (according to Rule 2), the members 5 and 9 (Rule 3) and the members 10 and 13 (Rule 1). To further reduce the number of unknown forces, we compute the support forces by applying the equilibrium conditions to the whole truss. 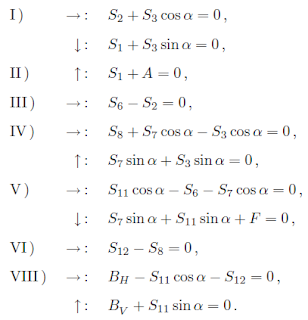 These are 11 equations for the 8 unknown forces in the members and the 3 forces at the supports. Since the support forces have been computed in advance and are already known, the analysis is simplified, and three equations may be used as a check on the correctness of the results. Using the geometrical relations

It is useful to present the results in dimensionless form in a table, including negative signs:

The negative values for the members 1, 2, 6, 7 and 11 indicate that these members are under compression.

Fig. 2 shows a spatial truss loaded by two external forces F at the joints IV and V. Compute the forces in the members 1-6.
Solution:

We free the joints V and IV by passing imaginary cuts through the bars, and we assume that the members 1-6 are in tension. The vector equations of equilibrium for these joints are given by

The initially unknown unit vectors can be determined from the vectors connecting adjacent joints, e.g., for e(V/VI) we obtain

Similarly, the other unit vectors are

Their solution yields the forces