What is Grading of Soil?

Since most building sites start out as raw land, the first step in site construction work usually involves the grading of the site. Grading basically consists of the cutting or filling of the ground in order to create a level building pad upon which the foundation and structure can be built. The three types of level building pads that are created by the grading operations are cut lots, cut-fill transition lots, and fill lots as illustrated in Fig. 1.

The typical steps in a grading operation are as follows: 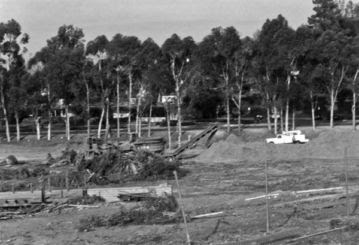 FIGURE 2 A large mechanical grinder has been brought to the site and the trees and brush
are being ground-up into wood chips. The wood-chips will be removed from the site and then recycled.

2. Clearing, brushing, and grubbing. Clearing, brushing, and grubbing are defined as the removal of vegetation (grass, brush, trees, and similar plant types) by mechanical means. This debris is often stockpiled at the site and it is important that this debris be removed from the site and not accidentally placed within the structural fill mass. Figure 2 shows one method of dealing with vegetation, where a large mechanical grinder has been brought to the site and the trees and brush are being ground-up into wood chips. The wood chips will be removed from the site and then recycled.

3. Cleanouts. Once the site has been cleared of undesirable material, the next step is the removal of unsuitable bearing material at the site, such as loose or porous alluvium, colluvium, and uncompacted fill.

4. Benching (hillside areas). Benching is defined as the excavation of relatively level steps into earth material on which fill is to be placed. The benches provide favorable (i.e., not out-of-slope) frictional contact between the structural fill mass and the horizontal portion of the bench.

5. Canyon subdrain. A subdrain is defined as a pipe and gravel or similar drainage system placed in the alignment of canyons or former drainage channels. The purpose of a canyon subdrain is to intercept groundwater and to not allow it to build up within the fill mass.

Other activities that could be performed during rough grading operations are as follows:

a. Ripping or blasting of rock. Large rock fragments can be removed from the site or disposed of in windrows. Seismic wave velocity can be used to determine if rock is rippable or nonrippable. Figure 4 shows a Caterpillar D10 tractor/ripper that can be used to excavate rock.

FIGURE 6 A loader is in the process of depositing material on top of the screen in order to
separate the large size rock fragments.
c. Cut-fill transition. Figure 1 illustrates a cut-fill transition. It is the location in a building pad where on one side the ground surface has been cut down exposing natural or rock material, while on the other side, fill has been placed.

e. Fill slopes. During the grading process, fill slopes can be created out of earth materials. Figure 1 shows the construction of fill and cut slopes.

10. Trench excavations. Utility trenches are excavated in the proposed road alignments and building pads for the installation of the on-site utilities. The excavation and compaction of utility trenches is often part of the grading process. Once the utility lines are installed, scarifying and recompaction of the road subgrade is performed and base material is placed and compacted. Figures 7 and 8 show trench excavations for the installation of storm drainage systems. The trenches should be either sloped or shored in order to prevent a cave-in.

11. Foundation construction. Although usually not a part of the grading operation, the footing and foundation elements can be excavated at the completion of grading in accordance with the foundation plans.

Most projects involve grading and it is an essential part of geotechnical engineering. For many projects, it is usually necessary to prepare a set of grading specifications. These specifications are often used to develop the grading plans, which are basically a series of maps that indicate the type an
extent of grading work to be performed at the site. Often the grading specifications will be included as an appendix in the preliminary or feasibility report prepared by the geotechnical engineer.