Since the start of the formal approaches and procedures for carrying out the structural design, there have been many developments in the underlying principles and the implicit and explicit design objectives. Starting with putting limits in the allowable (working) stresses in various materials to achieve indirect safety factors, the design process slowly evolved within last few decades to more explicit consideration of different load and capacity factors. The recognition of the difference between brittle and ductile failure, and the introduction of capacity-based design approaches, led to the more comprehensive performance design using high level of analysis sophistication, and more explicit linkage between demand and performance. The most recent emphasis is on risk-based design, and a more integrated and holistic approach within the framework of consequence-based engineering. This section discusses a brief account of the progression of these design approaches and their impact on the cost, performance, and the final objective of public safety. 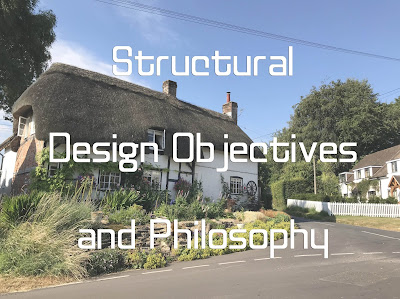 Structural design is the process of proportioning the structure to safely resist the applied forces and load effects in the most resource-effective and friendly manner. The term “friendly” refers to the aspect of design dealing with environmental friendliness, sustainability, ease of construction, and usability that are not explicit part of the strength consideration. Resources refer to the use of material, labor, time, and other consumables that are used to construct and maintain the structure. Ideally, the role of structural design is straight forward. It is the transformation of the effects of various environmental and man-made actions (including constraints on materials, dimensions and cost etc.) into the appropriate material specifications, structural member sizes, and arrangements (Fig. 1).
The basic objective is to produce a structure capable of resisting all applied loads without failure and excessive deformations during its anticipated life. The very first output of any engineering design process is a description of what is to be manufactured or built, what materials are to be used, what construction techniques are to be employed, and an account of all necessary specifications as well as dimensions (which are usually presented in the form of drawings). The second output is a rational justification or explanation of the design proposal developed based on either full-scale tests, experiments on small physical models, or the mathematical solution of detailed analytical models representing the behavior of real structures.

The process of structural design has passed through a long and still continuous phase of improvements, modifications, and breakthroughs in its various research areas. The structural analysis and design philosophies for new and existing buildings have a fascinating history. Perhaps, the first ever achievement in the history of structural design was the “confidence” by virtue of which early builders were able to convince themselves that the resulting structure could, indeed, be built and perform the intended function for the entirety of its intended life. Hence, the job of the very first engineers can be thought of as “to create the confidence to start building”. Over the course of the history, various scientists, mathematicians, and natural philosophers presented revolutionary ideas which resulted in improved understanding of structures and built environment. With the developments in different areas of practical sciences, the task of building design was gradually divided among more and more professionals depending upon aesthetic considerations, intended functions, materials, optimum utilization of space, lighting, ventilation, and acoustic preferences. The visual appearance, sense of space, and function (or the architecture) became a distinct concern during the 15th and 16th centuries. About a century later, designers first began to think about the load bearing aspects of structures in terms of self-weight and other sources of expected loading. Thinking separately about the role of individual materials and resulting structures grew during the late 17th and 18th centuries following Galileo’s work. The idea that the aesthetics should be given proper importance independent of the materials and load-bearing characteristics of the structure prevailed during the late 19th and the early 20th centuries.

Table 1 presents a brief timeline of some of the major developments which led to modern techniques and methodologies for analyzing and designing structures.

It is worth noting that historically an understanding of how structures work was never a phenomenon that required detailed knowledge of mathematical procedures and laws of mechanics. A common misconception is that various new structural forms and shapes were first devised by mathematicians (and experts of geometry) and later taken up by builders and engineers. In fact, the opposite is true, with perhaps just one exception, i.e., the hyperbolic paraboloid (whose structural properties were discovered in 1930s). In the last few centuries, artists, sculptors, and builders have displayed a remarkable understanding and skill of converting materials into structures (some of which are still standing today remarking the testimony of their expertise).