Researchers from ETH Zurich have built a prototype of an ultra-thin, curved concrete roof using innovative digital design and fabrication methods. The tested novel formwork system will be used in an actual construction project for the first time next year. 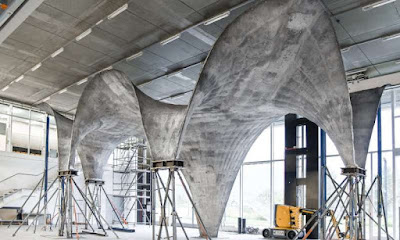 A prototype for an ultra-thin, sinuous concrete roof using innovative design and fabrication methods has been designed and built by researchers from the ETH Zürich. The shell is part of a roof-top apartment unit called HiLo that is planned to be built next year on the NEST, the living lab building of Empa and Eawag in Dübendorf. The penthouse will provide living and work space for guest faculty of Empa. Researchers led by Philippe Block, Professor of Architecture and Structures, and Arno Schlüter, Professor of Architecture and Building Systems, want to put the new lightweight construction to the test and combine it with intelligent and adaptive building systems.

The self-supporting, doubly curved shell roof has multiple layers: the heating and cooling coils and the insulation are installed over the inner concrete layer. A second, exterior layer of the concrete sandwich structure encloses the roof, onto which thin-film photovoltaic cells are installed. Eventually, thanks to the technology and an adaptive solar façade, the residential unit is expected to generate more energy than it consumes.

Tried and tested to scale

The building technique for the roof was developed by the Block Research Group, led by Prof. Block and senior researcher Dr. Tom Van Mele, together with the architecture office supermanoeuvre, and tested out on a full-scale prototype. The prototype, which has already been dismantled to make space for future experiments, was 7.5 m high with a surface area of 160 m2 (covering an area in plan of 120 m2). The thickness of the concrete has an average thickness of 5 cm varying between 3 cm along the edges of the roof to 12 cm at the support surfaces. 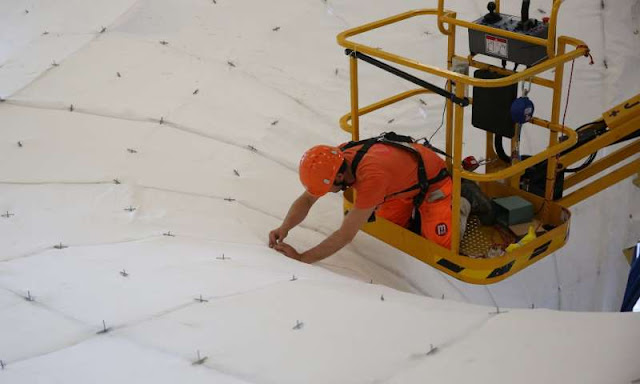 Instead of formwork using non-reusable custom-fabricated timber or milled foam, which would be needed to realise such sophisticated form, the researchers used a net of steel cables stretched into a reusable scaffolding structure. This cable net supported a polymer textile that together functioned as the formwork for the concrete. This not only enabled the researchers to save a great deal on material for construction, they were also able to provide a solution to efficiently realise completely new kinds of design. Another advantage of the flexible formwork solution is that during the concreting of the roof, the area underneath remains unobstructed and thus interior building work can take place at the same time.

Algorithms for controlling the shape

The cable net is designed to take on the desired shape under the weight of the wet concrete, thanks to a calculation method developed by the Block Researcher Group and their collaborators in the Swiss National Centre of Competence (NCCR) in Digital Fabrication. The algorithms ensure that the forces are distributed correctly between the individual steel cables and the roof assumes the intended shape precisely. The cable net weighs just 500 kg and the textile 300 kg; thus, with a total of only 800 kg of material the 20 tons of wet concrete are supported. 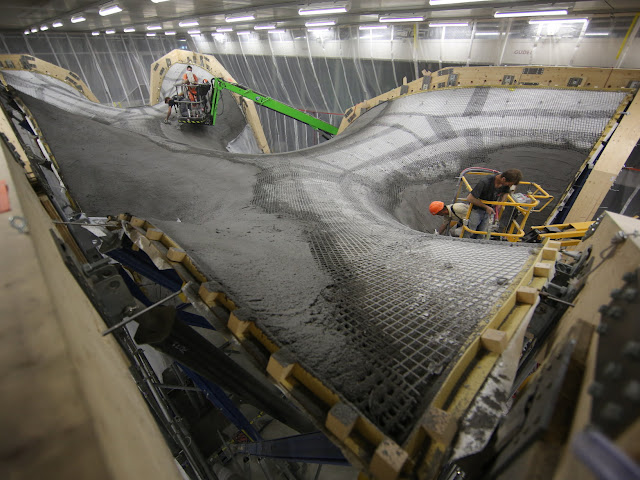 The construction of the roof would be inconceivable without state-of-the-art computation and fabrication techniques, but the project also heavily relied on the expertise and experience of several craftspeople. Experts from Bürgin Creations and Marti sprayed the concrete using a method developed specifically for this purpose, ensuring that the textile could withstand the pressure at all times. Together with Holcim Schweiz, the scientists determined the correct concrete mix, which had to be fluid enough to be sprayed and vibrated yet viscous enough to not flow off the fabric shuttering, even in the vertical spots.

Proof that it works

Block's team built the prototype over the course of six months in ETH Zurich's Robotic Fabrication Lab. It represents a major milestone for the NEST HiLo project: "We've shown that it's possible to build an exciting thin concrete shell structure using a lightweight, flexible formwork, thus demonstrating that complex concrete structures can be formed without wasting large amounts of material for their construction. Because we developed the system and built the prototype step by step with our partners from industry, we now know that our approach will work at the NEST construction site," says Block.

The process to get to this point took almost four years, from the start of the project to the finished prototype, partly because Block wanted to involve several industry partners in development of the prototype. Next year, he plans to build the roof once again at the NEST building in eight to ten weeks. The individual components of the roof structure can be reused as often as needed. The cable net can be dismantled into a few parts that can be quickly reassembled and rehung.

The HiLo unit is impressive not only because of its unusual roof design, but also due to its innovative lightweight floor system and a building technology with a positive energy balance. Energy is exchanged between the individual units in the NEST building. The HiLo unit is required to produce more energy than it consumes. As compensation, it can use waste heat from the other building units, as well from buildings in NEST's district network. This is where ETH professor Arno Schlüter comes in: the professor of architecture and building systems is developing a building system with sensors that uses heat at low temperatures to create a pleasant interior climate. For this purpose, he uses components of the structure, including the roof, that are thermally activated.